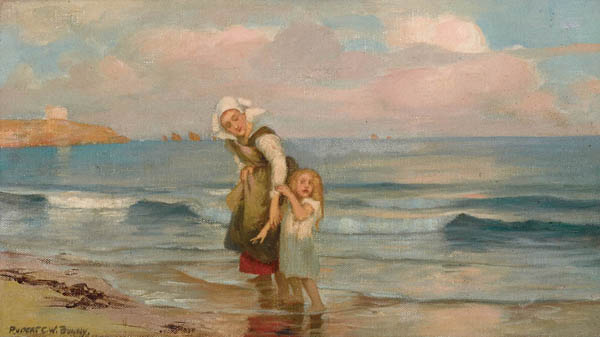 By in Blog
Lot:
Mother and Child on the Beach

Throughout the nineteenth century Rupert Bunny’s major paintings delighted in depictions of figures by the seashore. His 1890 Tritons (Art Gallery of New South Wales, Sydney) was awarded a mention honorable at the Paris Salon (an Australian first), and in 1892 Alfred Felton’s first gift to Melbourne’s National Gallery of Victoria was Bunny’s Sea Idyll c1891. Pagan fascinations continued through the internationally acclaimed Pastoral c1893 (National Gallery of Australia, Canberra), transformed, by the late nineties, into idealisations of feminine beauty, as in his masterpiece, Dolce Farniente c1897 (private collection), and A Summer Morning c1897 (Art Gallery of South Australia, Adelaide).

Another, Women by the Sea c1894, in the Museum of Fine Arts, Budapest, is more closely related to our Mother and Child on the Beach c1894 in the transformation of the everyday into something of special beauty and wonderment. Fascinated by the Symbolists’ love of the indeterminate and the transience of time, it is touched by the subtlest of mystery – the calm of dawn garbed in the finest pinks, likewise suggestive of twilight. The Breton fishing fleet departs across the horizon as our attention is drawn to the two figures in the foreground, at water’s edge, where youthful hesitation is embraced by motherly care. The scene is Brittany in the northwest of France, its pink cliffs, the Côte de Granit Rose, and turquoise waters enveloped in an atmosphere of enchantment. Captivated by its natural beauty, Brittany excited Bunny’s imagination, as witnessed in another related painting, Au Board de la Mer II c1898 in the Wilbow Collection, Melbourne. Years later, towards the end of the first decade of the twentieth century, the subject of women and children relaxing by the sea had an elegant flowering in some of Bunny’s best works of the time. Last Fine Days, Royan c1908, in the Newcastle Art Gallery, and Shrimp Fishers at Saint-Georges c1909 in the National Gallery of Victoria, are two vibrant examples.

A number of paintings of Brittany were included in Bunny’s spectacularly successful first Australian solo exhibition held at the Athenaeum Hall, Melbourne in 1911. Although unidentified – catalogue number 70, Brittany Coast, is a tempting possibility - it would seem likely that our painting was amongst the more than one hundred works on show.