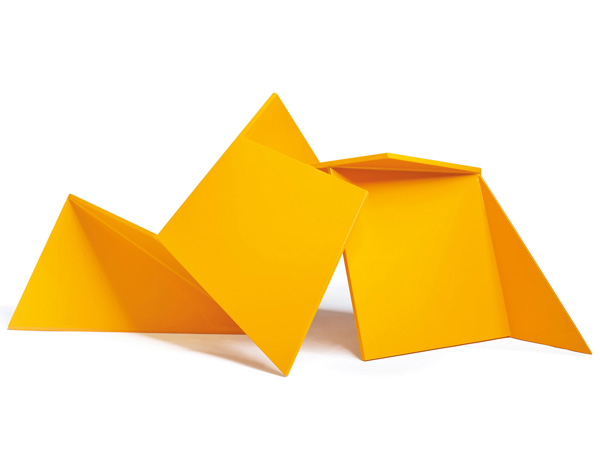 By menzies in Blog
Lot:
Vault

The sculpture Vault 1980 was commissioned in 1978 for Melbourne City Square. Once installed the sculpture provoked discussion and acrimony that led to Vault being relocated to Batman Park in 1981 and subsequently to Australian Centre of Contemporary Art in 2002.

The response was the general disbelief that abstract form was not suitable nor usual for prominent social paces. Ron Robertson-Swann’s abstract sculpture was also bright yellow. It was contentious and large but designed to contrast with the grey basalt surrounds of the site and to invite the public to explore its many forms.

The antipathy to abstract form was keenly felt by the sculptor whose training was dedicated to a new form of sculptural abstraction under Anthony Caro (1924-2013) and alongside his contemporaries, Tim Scott (born 1937), David Annesley (born 1936) and William Tucker (born 1935). What was common to the pursuit of abstract sculptural form was less obvious to those who came to view Vault in the city square.

Caro and his contemporaries had been prompted by recent abstract American painting and the sculpture of David Smith (1906-1965). Sculpture had come off the plinth and the concept of mass and density was changed by delineation. As form flattened and broadened, it did so for the viewer. Sculpture was changed by the active experience of movement and felt in a different way. Vault was a provocation to those who questioned a lack of hierarchy: no single figure, no commemoration, nor confirmed place.

Vault 1980, our current lot, is part of a sculptural process. Ron Robertson-Swann made a working model of Vault in wood and then in steel to finalise the commission. Our model is fabricated in 2012 and is in sequence with two other editions of Vault; one in steel and the other, painted aluminium. It is an exact replica, and like Vault’s final resolution, the sculpture speaks with the same voice of bright angularity and engagement.