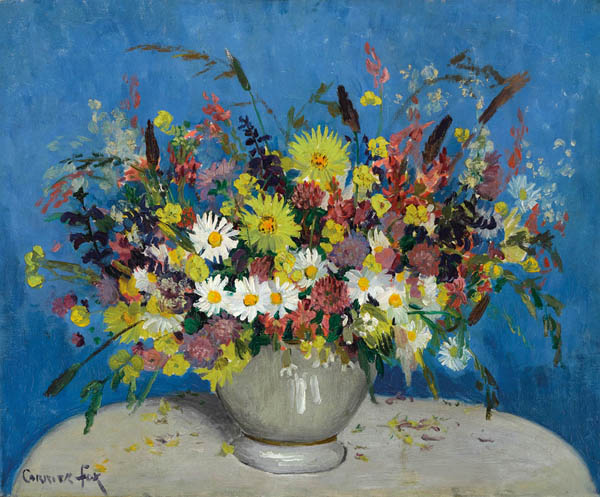 By
Lot:
Bowl with Wildflowers

The still life has been a popular and collectible subject since its genesis as an independent genre in the fifteenth century. The trend towards the still life genre in northern parts of the Netherlands at this time was due to the increasing urbanisation of Dutch and Flemish society, which brought with it an emphasis on the home and personal possessions. Many of the objects depicted in these early works were symbolic of the Virgin or other religious figures, such as the lily’s purity, while compositions laden with skulls and candles were more obviously didactic. Floral still lifes were particularly prominent in the 1600s and they were sought after by wealthy collectors who had an appreciation for the subject. The Dutch masters Jan Brueghel the Younger (1601–1678) and Jacob Vosmaer (1584–1641) were among the dominant practitioners of the time, depicting woven baskets overflowing with rare or unusual specimens. Their highly refined execution and hidden symbolism appealed to a refined audience, particularly the royal courts and aristocracies of the time. The genre’s popularity has endured over time and remains one of art history’s most favoured subjects.

Looking forward to the late-nineteenth and early twentieth centuries, the still life tradition was still strong with artists such as Paul Cézanne (1839-1906) and Giorgio Morandi (1890-1964) devoting much of their careers to the modern representation of the subject. English-born Ethel Carrick Fox attended the Slade School of Art in London in 1903, the following year attending summer school at Newlyn where she studied the work of the Impressionists. In 1905, she married Australian born Emanuel Phillips Fox (1865-1915) and the couple settled in Paris and painted the bustling streets and markets which became part of their everyday lives. Over time, Carrick Fox developed a looser, Post-Impressionistic style which is evident in the bolder colour palette visible in her work. Some of Carrick Fox’s most well-known works are her renderings of Paris’ flower markets – rows of brightly coloured flower stalls beneath market umbrellas, employing a palette of vivid reds, greens and blues. The present work, Bowl with Wildflowers, was most likely painted in Paris in 1920 where the artist was living after the first World War. The stretcher bears the label of the famous art supply store in Paris, Lucien Lefebvre-Foinet, where artists would go to buy paints and canvases. Emanuel Phillips Fox had died prematurely in 1915 leaving Carrick Fox to support herself by teaching art students and selling some of her smaller works. Her Post-Impressionistic influences are demonstrated in Bowl with Wildflowers, seen in the royal blue background and brightly coloured floral arrangement punctuated with pink, yellow and white.

Ethel Carrick Fox spent much of her life promoting the work of her late husband following his death however the artist had established her own artistic identity on the strength of her talents. As David Thomas states, ‘it is important that we do not lose sight of her own very considerable achievements as an equal in partnership. While Phillips Fox’s art is of a gentler and intimate nature, Ethel Carrick’ Fox's is characterised by strong colours and design, and vigorously applied paint.’1