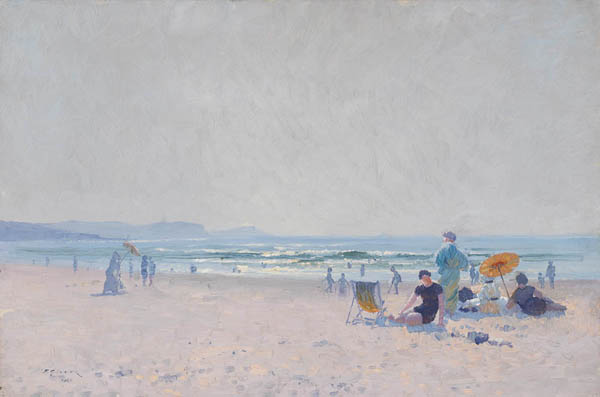 By in Blog
Lot:
On the Sands

Elioth Gruner’s rise to fame was spectacular. Years later, fellow-artist Lloyd Rees (1895-1988) recalled: ‘Sydney in 1917 was still excited about quite a small work called “The Morning Light”, painted two years earlier by Elioth Gruner. It was one of the freshest portrayals of Australian light seen up to that time’.1 Morning Light, now in the collection of the Art Gallery of New South Wales, was awarded the 1916 Wynne Prize, Gruner’s first of seven. Spring Frost, hailed as the picture of the year for 1919, likewise won the Wynne, followed in 1921 by Valley of the Tweed, commissioned by the Sydney gallery trustees in 1919.2 Although these accolades were won with inland landscapes, his beach scenes were much admired. As early as 1912, the reviewer for The Sydney Morning Herald observed: ‘Mr. E. Gruner’s coast scenes show many fine qualities. The encircling blue sea at “The Spit,” the atmosphere, and the perspective all contribute to the making of a good picture; and the little scenes at Bondi and at Bronte, with the minute figures on the ocean’s verge beyond the wide expanse of sand, suggest the manner of Conder’.3 The reference to Conder is revealing, highlighting their shared gifts for capturing the sensation of atmospheric effects, especially of sunlight, and eye-catching decorative use of colour. Gruner’s love of the sea, heightened by his move to Bondi that year, marked the beginning of several series of beach paintings. They include some of the finest of his entire oeuvre. Being a keen body-surfer, much of his weekend was spent at the beach, as love spilled over into art. Nine harbour and beach subjects, shown in the 1913 annual exhibition of the Society of Artists, bear witness.

Bondi Beach c1912, in the collection of the Art Gallery of New South Wales, (a gift of Norman Lindsay’s wife in 1939), and The Wave c1913, Queensland Art Gallery, (gifted by Lady Trout in 1978), delight in cavalcades of figures seen from a high viewpoint. And Manly c1912-13, once in the collection of Julian Ashton, reveals Gruner’s further fascination with clusters and ribbon-like presentations of lively figures, all touched by J.M.W. Whistler (1834-1903) and Japonisme. Perhaps none summed up his response better than the oil painting he titled The Jewelled Beach (private collection), of c1913-14. Moreover, in the midst of his triumphant morning lights across the Emu Plains, Gruner returned to the sea shore, working on a larger, more commanding scale, as in The Beach 1918. Now in the New England Regional Art Museum, Armidale, a 1941 gift from that perceptive collector and generous donor, Howard Hinton, The Beach is well related in size and subject to the present work, On the Sands 1920. The absence of a horizon, however, brings the figures and breaking waves closer, providing a composition of greater involvement with the viewer. There is also a touch of the French, masters of the leisured bathing scene, in the feel of paint and pleasure.
Another smaller painting of similar subject and appeal is Tamarama Beach c1920 and closer in date. Both have an air of anonymity – backs of figures viewed at a distance, in Tamarama Beach closer, On the Sands further away. Politeness might suggest privacy, challenged by the appeal of blue shadows on yellow sands. Compositional strength is gained through the classical balance of long horizontals of land, sea and sky, calm, ascending bands enveloped in the most dazzling of light. Light has always been the captivating feature of Gruner’s art, achieved principally through his contre-jour approach - painted looking into the light. The radiant light of On the Sands is felt particularly through the pulsating brushstrokes, morning sun yielding to midday and shorter shadows. The commanding interplay between dominant horizontals and the contrasting verticals, of figures and deck chairs, is achieved through those reclining on the sands, the orange oriental sunshade proving a key colour note and striking link in both paintings. Seas are characteristically calm, waves of gently breaking indolent curve, the languid mood embracing the haze and lassitude of a summer’s day. All is heightened through easy technical brilliance, the seeming simplicity of realisation celebrated in an embracing sense of joy in the handling of paint.

Great talents evoke awe. Reviewing Gruner’s solo show at the Macquarie Galleries in August 1926, Hugh McCrae wrote in the Sunday Times: ‘When I gazed, for the first time, upon his picture of “Morning on Mount Lofty,” I felt I should have cried for pleasure at the insinuation of an unseen thing … the wind … advancing over a forested valley’.4 As implied, the results of Gruner’s spectacular gifts appeared to have a touch of magic in them. His contemporaries were grateful, McCrae declaring that ‘Elioth Gruner’s show of twenty-nine oil paintings, at the Macquarie Galleries, in Bligh Street, has made the month of August, 1926, memorable to the minds of picture-lovers throughout Sydney’.5 For all this, Gruner was a very shy, self-effacing man, clearly seen in the objectivity of his presentation and detachment from the figures on the beach. Although facing the viewer, even the main figure in On the Sands is given a blank face. Other active players on his sandy stage – at cricket or water’s edge – are likewise faceless – yet all are swept up in a kind of painterly poeticism. For Gruner, the passion seemed to come from working en plein-air, directly from nature, expressed, as put by the critic for The Sydney Morning Herald, through his ‘surpassing fluency of brushwork’.6 Although Morning Light 1916 and Spring Frost 1919 (both in the collection of the Art Gallery of New South Wales) are regarded as his most popular masterpieces, Gruner loved the sea. He chose to live most of his life at Tamarama, painting beach scenes which share his delight in what he saw and felt. As Barry Pearce wrote: ‘…Gruner’s beach panels were a product of his love of and physical involvement with the subject.’7. It singles them out from other works and still gives them such ready appeal today.

Their appeal to collectors of his day is strikingly evident in the names of the prominent identities who jealously added his paintings to their collections. One, R.D. Elliott of Melbourne (future patron of the Mildura Arts Centre), amassed such a number that he was able to afford an entire loan exhibition for showing at the Bendigo Art Gallery during 1920, the year of our painting. Gruner, returning to Australia in 1925 after managing the exhibition of Australian art at London’s Royal Academy, saw eight of his landscapes included in the major Loan Exhibition of Australian Paintings. Held at the National Gallery of Victoria in 1925, the current painting, On the Sands, lent by Sir George Tallis, was prominent among them.

A further four were borrowed from R.D. Elliott. George Russell provided Beach Carnival and J.T. Tweddle, The Bathers. It was an extraordinary show in its own right, the 395 works being selected from the cream of Melbourne’s private collections. In 1940 his stream of beach paintings had a grand finale at the Elioth Gruner Memorial Loan Exhibition arranged by the then National Art Gallery of New South Wales. Selections from the whole range of his beach subjects were on view. B.J. Waterhouse, Gallery President and fellow-artist, wrote warmly of Gruner in the catalogue introduction: ‘He was, pre-eminently, a distinguished landscape painter, possessing an acute and analytical mind, intensely receptive to the infinite and elusive variations of light and colour which he depicted poetically and lyrically with accomplished and charming technical skill’.8 Significantly, and as a testament to a life-long passion, Shelly Beach 1939, was catalogued as ‘The last completed work of the artist’.9 Gruner’s identification with the sunny beach was so complete that he gave these paintings a directness which touches on the profound.