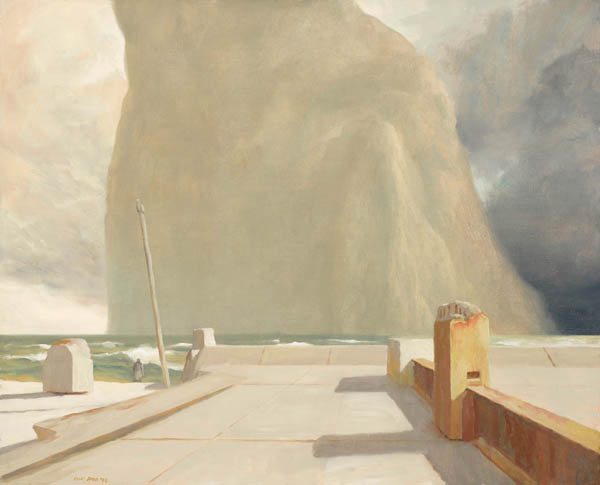 By in Blog
Lot:
The Returning Storm

In a celebrated passage in Romantic poet William Wordsworth’s (1770-1850) The Prelude, a boy ventures across a lake in a boat to find himself suddenly aware and intimidated by the rearing mountainous peak beyond the lake.  There is a resonance with this, one of the classic encounters with the beauty and terror of the sublime and Rick Amor’s The Returning Storm 1998.

In Amor’s painting, a concrete roadway terminates at the ocean’s edge where a tiny figure stares out to sea, dwarfed by a jagged island and immense and oncoming storm clouds. The sheer size of the thunderhead suggests menacing power and the broken columns by the road suggest both time and decay as well as the potency of nature. The figure facing away from the viewer has its precedent in the work of another Romantic, German painter Caspar David Friedrich (1774 - 1840).  Friedrich often depicted man in the face of nature’s immensity as Amor does here.  The faceless individual may be a stand-in for the artist, everyman or even the viewer but in any case, their role is to complete the encounter between man and nature - to be a witness. The figure is alone, but the emphasis is not on loneliness but rather on solitude; special moments where there is communication with the self and permission to wonder in the strangeness and beauty of the world, to witness feelings of awe, savour a sweet melancholy and perhaps humility in the face of its immensity.

The Returning Storm presents an essential divide – human artefacts on one side and wild nature on the other, and the viewer is asked to weigh the relative power of either side.  The notion of human order versus primal chaos isn’t as neatly defined as in Wordsworth’s Prelude, but the disquiet of time and decay, the inevitable entropy beyond this frozen moment, is easily sensed.

‘Since childhood I have had a fantasy’ noted Amor, ‘about seeing a large object or creature rising from the sea. I both wanted it to happen and feared it. It may have been prompted by the big naval ships that anchored just off the beach behind my childhood home, then disappeared overnight. My early years were spent on the beach at Frankston where we sometimes found the remnants of chewed and unidentified sea-creatures washed up after a storm. These fed the fantasy. I was also attracted to the Irish myth of Hy-Brasil Island that was said to appear and disappear, and was marked on early maps of the sea to Ireland’s west.’1

Amor’s work appears realistic but in reality altered in much the same way a dream alters life.  The littoral between earth and ocean, with all its associations, has insinuated itself into his personal mythology.  Amor’s images have a concrete basis - photos and drawings are often made in situ, though fictionalised through a filter of emotions as much as calculation as to what makes a good painting. He takes a traditional approach to ‘building’ a painting. First, making preparatory drawings which are then worked up into maquettes to test palette, composition and mood, before a ‘finished’ painting is started.

The maquette can be smaller and have less detail than the final work and this might be the case with The Returning Storm 1998, as a second, slightly larger, painting followed the present work.  Details differ slightly - the sea is greener in this version, the pole angled rather than vertical, the figure proportionately larger, as is the island which looms like an iceberg about to strike.  While the storm is blacker in the larger variant, the palette in this work is darker and the encounter feels different, more menacing somehow.  Amor made other related works, differing in detail but reusing the motif of a towering island.  An etching done in 2001, for example, uses the same essential composition but shows the figure running. A painting, Visitor by the Southern Seas 2000, dispenses with the roadway and has the peak set against a clear morning sky.  Motifs and ideas may be reused as a way of fully exploiting and coming to terms with an idea.

1. Correspondence with the author, August 2019