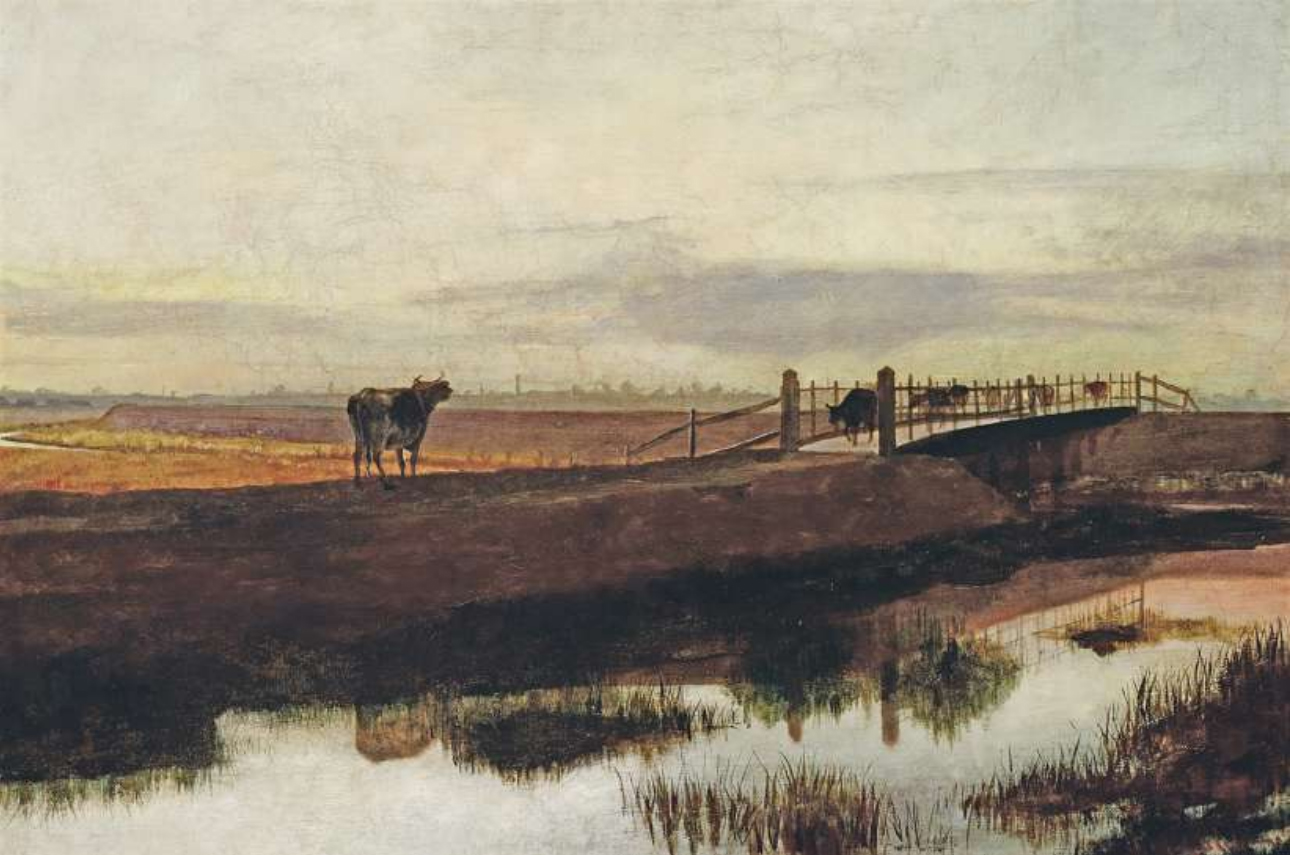 Dated on its stylistic similarity to Falls Bridge, Melbourne 1882 in the National Gallery of Victoria, Cows Crossing McCauley Creek, Looking towards Melbourne c1882 provides a striking example of Frederick McCubbin’s early mastery of the melancholic moment in his narrative paintings. His well-known masterpieces of the toils and tribulations of the pioneers – Lost 1886, in the collection of the National Gallery of Victoria; Down on His Luck 1889, Art Gallery of Western Australia; and the grand The Pioneer 1904, again in the National Gallery of Victoria, to mention a few – are among Australia’s best known and loved paintings. In Cows Crossing McCauley Creek, Looking towards Melbourne a moving note of melancholy is sounded by the leading cow. Facing its kin crossing the bridge, it lifts its head in mournful cry to follow - on their way to the abattoirs. The emotional impact of the scene is heightened by the time of day, the setting sun and evening sky evoking a parallel between the closing of day and of life. Silhouette heightens isolation, the animals’ reflections in the mirror-like waters minimal.

As a young man, McCubbin had very romantic ideas about art. The first monograph on his art tells us that he wanted: ‘To paint wonderful pictures that were so beautiful that everybody would love them. He imagined stupendous historical pictures – ‘The Battle of Waterloo,’ ‘Raleigh,’ ‘Queen Elizabeth,’ long-forgotten events from the history book at school.’1 He succeeded when, in 1880, he exhibited Sketch for Antony and Cleopatra 1880 at Victorian Academy of Arts. But his romantic notions about art and life had been jolted by reality. As a teenager, he had been abruptly taken from the solicitor’s office where he was found making model theatres, his father placing him on one of his carts for the early morning bread delivery. ‘His round lay through North Melbourne down to the boats at the wharves, and across the then Melbourne Swamp to a few customers on the banks of the Yarra.'2 It was to provide a rich source for paintings such as the present work and View Near Fisherman’s Bend c1880, thought to be the first painting McCubbin sold and now in the collection of the Queensland Art Gallery. The subject offered more than the attraction of a landscape. There had been a strike at the Melbourne Gas Company. Some of the workers settled at Fisherman’s Bend, where they remained, never to be reinstated. The cottage in the painting is believed to be one of theirs. The painting provides an early example of the sentimental appeal in McCubbin’s art, with particular emphasis on the humble dignity of manual labour.

Domesticated animals appear throughout McCubbin’s art. One of his earliest known works to survive is the watercolour Milking Time 1876 (private collection), which, like our painting, is likely to have been inspired by the Melbourne Swamp. Although horses and chooks appear in some of his best works –  The Old Stone Crusher 1911 (Art Gallery of South Australia); Hauling Timber, Macedon Heights 1911 (private collection); Feeding Time 1893 (private collection) and Autumn Morning, South Yarra 1916 (National Gallery of Victoria) - cattle seem to have a greater appeal. Milking Time and Cows Crossing McCauley Creek, Looking towards Melbourne mark the beginning of McCubbin’s journey that exploded into colour in his late Turneresque gems featuring cows. They include the masterpieces Autumn 1908 (Tasmanian Museum and Art Gallery); Evening in the Bush 1911 (Sotheby’s, Melbourne, 23 May 2005, lot 20); and Flood Waters 1913 (National Gallery of Australia).