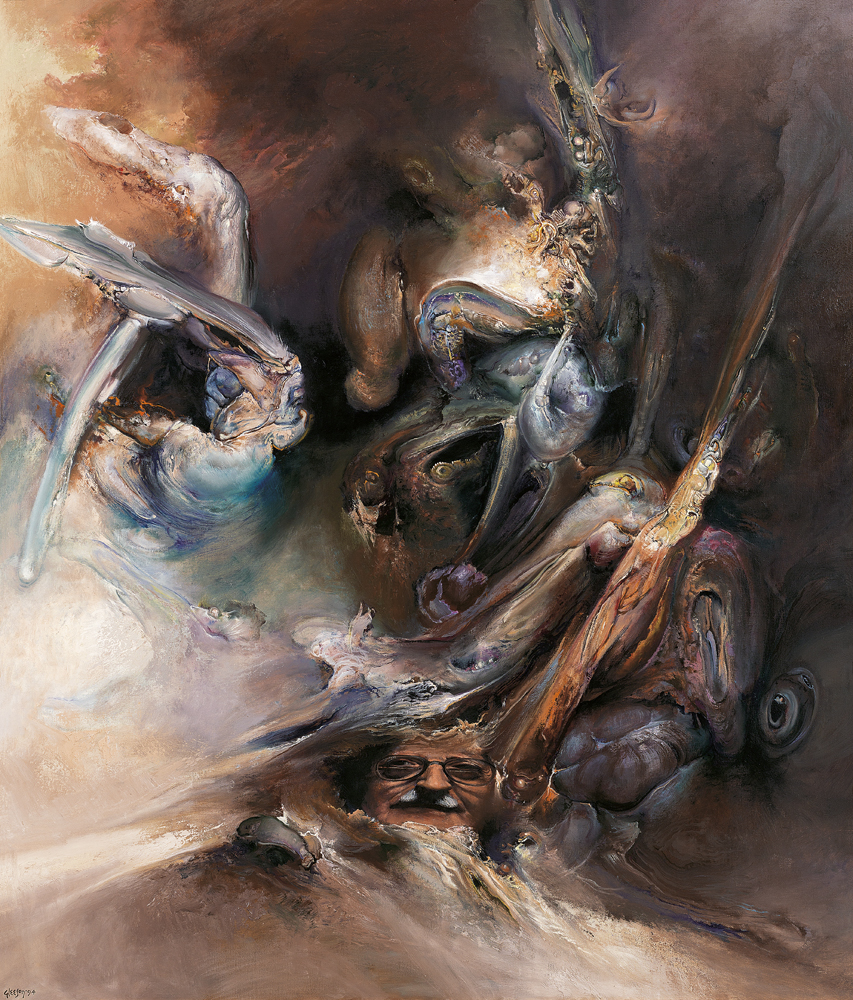 By Associate Professor Ken Wach in Blog
Lot:
Landscape with Self-Portrait in Parenthesis

The mid-Nineties were momentous years for James Gleeson (AM 1975; AO 1990; Hon. D. Letters, Macquarie University 1985). The present painting, his large and magisterial Landscape with Self-Portrait in Parenthesis of 1994, belongs to this significant period.

It was a period during which three important things occurred: Professor Di Yerbury, the then Vice Chancellor of Macquarie University, announced the establishment of the James Gleeson Foundation (1993); The National Gallery of Australia held its highly successful internationally selected touring exhibition Surrealism: Revolution by Night (1993), which included sixteen works by Gleeson and the National Gallery of Victoria held its exhibition James Gleeson: Paintings from the Past Decade (1994), where his newest large painting, Landscape with Self-Portrait in Parenthesis, was prominently displayed.

Unfortunately, Gleeson suffered a stroke during this period. His abilities and faculties remained unchanged but the necessary medical treatments meant his artistic work had to take a back seat for a period. He made a full and symptom-free recovery. The short break seemed to energise him. He started on some large works (the present painting is one of them) and his artistic vision turned even more pointedly inward. The most impressive painting of this period is his Portrait of the Artist as an Evolving Landscape of 1993, a 1994 Archibald Prize Finalist, which is very closely related to the present work Landscape with Self-Portrait in Parenthesis of the same year.

Over lunch at his Northbridge studio-home, Gleeson explained that his imagination had became more attuned during and after his medical treatments; but not only that, it had changed direction. Instead of probing the hidden underbelly of the outer world he started to see how he was “bracketed by” and, in a sense, conditioned by the inner world of his own sensory perceptions. He explained how odd it felt in hospital to be held captive by his own body – its symptoms, sensations, responses and needs. He felt “enveloped”, he said.

Many of the most significant paintings of this important period rest upon this sense of “envelopment” – the present painting Landscape with Self-Portrait in Parenthesis of 1993 is one of them.

Gleeson’s Landscape with Self-Portrait in Parenthesis of 1993 is characterised by a hypnagogic fragmentation – one in which his features, at the age of seventy-nine, are overwhelmed by images of foreboding and apprehension. It was as though he was but a small part of what was going on around him – a not untypical response to surgery and medical intervention. He felt swamped, “enveloped”, by symptoms while caught in a dazed world of felt sensation and illusory images.

When he painted Landscape with Self-Portrait in Parenthesis he progressed across the canvas like a tidal wave – each sweep inching slightly further with every wave. He would start at one corner and finish each section as it seeped into the imagery of the next. Most artists work on different sections at different times, or momentarily focus on one section then another, as though they were human flashlights that lit up various areas of the canvas. Gleeson’s vision, on the other hand, seeped across the canvas like an imagined blot – as it covered more and more ground it gave rise to fractal-like growths that themselves spawned ever different forms. These semi-guided, spontaneously generated forms not only recall Gleeson’s post-operative recovery room hallucinations, but also give shape to some of his semi-conscious associations. These associations are bodily extensions of his own internal organs – bloated shapes, congealed passages, coagulated masses and even the long tunnel (lower right section) reported by many who undergo surgery. The whole inner spectacle is witnessed by a bizarre Angel of Death (middle left section) holding a deformed sword, like something from a Dürer Apocalypse print, and threatened by a rising tide at its lower section and a brooding sky in its upper register.

Gleeson’s Landscape with Self-Portrait in Parenthesis of 1993 is an emotional seismograph in paint. It was prompted by real events, but its visual power rests upon its internalist associations where the mind suggests to the eye. In this sense, it falls in line with one of Surrealism’s most firm convictions: that painting should arise from “pure psychic automatism”.