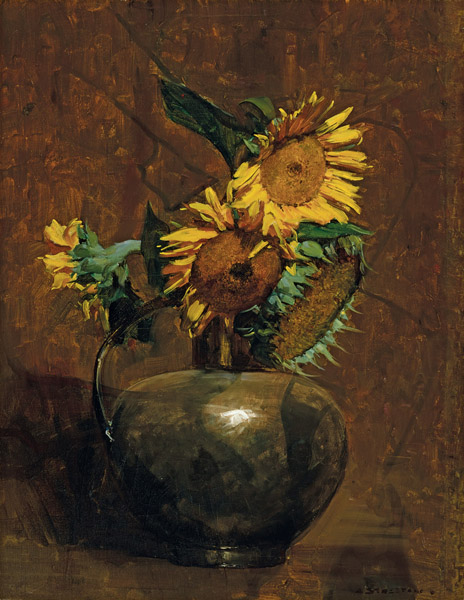 A letter written to his friend and fellow artist Lionel Lindsay (1874-1961) in 1936 by Arthur Streeton conveys something of the artist’s mood and outlook after a lifetime as a central figure of Australia’s art world:

I don’t go into Melbourne more than I can help. I spend my days working in my garden.1

In 1921 Streeton had bought a 5 acre piece of land near Olinda in the Dandenong Ranges about 20 kilometres due east of Melbourne.  In the following years after his permanent return to Australia in 1923, he built a house, ‘Longacres’ and from 1926 began to spend more time there. He devoted much of the later period of his life to enjoying his garden and the surrounding forest while continuing to paint and exhibit his work.

Distancing himself from the more charged atmosphere in Melbourne permitted Streeton to take a more reflective approach to his life and work, and yet there is no evidence that he slackened his work ethic.  Typically he was able to produce enough to have an annual exhibition as well as participating in numerous group exhibitions.

Streeton’s disposition as an artist underwent a subtle change during this period. The technical virtuosity which was his hallmark, and which was a source of wonder to his contemporaries as much as it is to us today, remained unchanged, and yet his work acquired over the years a degree of polish which conveyed a notion of his authority, and flavoured his work with a kind of grandeur which was not present in his earlier paintings. Streeton’s aesthetic posture, as the champion of an ‘Australian Idyll at the edge of the Empire’, a posture which he nurtured and which was entirely in keeping with his era, animated Streeton during his years in London, and came to the fore in his service as Australia’s official war artist. The war induced a period of great productivity and inspired some of the most ambitious and innovative work of his career. It also can be the seen as the source of change in Streeton’s outlook. Like many who returned from the First World War, home life would have taken some getting used to. You get the sense that Streeton was disinclined to accept that things were the same as they had been before the war.

The growing interest in the landscape, in particular in the hills around Olinda, provided Streeton with a ready subject suited to his more reflective mood which could engage his moral sense. The fringes of an expanding Melbourne took on a subtle melancholic air as Streeton began to document the forests before-and-after.  His work at this time reveals his realisation that the landscape he loved was being destroyed by ‘progress’.

The flower subjects that had interested Streeton intermittently since before the 9 by 5 Impression Exhibition show of his youth were, like the forest, a subject that was both convenient and close to hand. They also offered a gentler, more reflective, more personal and intimate material, while at the same time providing the now somewhat older artist with a more contemplative challenge. Nevertheless, Streeton’s approach to the subject was characteristically serious. From 1920 it is estimated that Streeton produced no less than 150 paintings of flower subjects.2

The flower paintings were no less successful for Streeton commercially, and the paintings were also eagerly sought by collectors and well received by connoisseurs and critics. A letter to the editor of the Sydney Morning Herald in 1931 records ‘a bunch of crimson roses on the wall […] so real, so perfect that one of the roses looked like it was about to wilt. Only a master hand had been at work on that canvas.'3 The subject demanded and inspired all of Streeton’s technical resources.  The freshness of the blooms and the reflection and shine of vases against a sketched backdrop offered the artist great scope for a display of his virtuosity.

Arthur Streeton’s work continues to generate interest amongst collectors. Recent auction prices for all his work, including high prices for his flower paintings indicate that his timeless art, transcending fashion, is constantly in demand. The inclusion of his work in the current hang at London’s National Gallery confirms his position as the most prominent Australian artist of his generation.