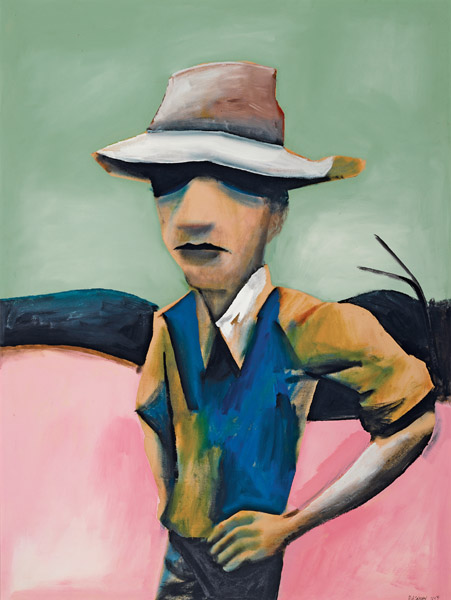 Some artists rise quickly to make a mark on the art scene; for others it can be a slow burn. Charles Blackman enjoyed a deservedly rapid rise – with adulation for his work increasing over time. This self-taught master of Australian art became recognised for his first solo exhibition, held in Melbourne in 1952, the celebrated ‘Schoolgirl’ paintings from 1953-54, followed soon after by the magical ‘Alice in Wonderland’ series that he worked on over 1955-56.

Hill Farmer (formerly known as Farmer) 1954, is among the first in a series of oil and enamel paintings on paper laid down on board that Blackman initiated after moving to a small rural community outside Melbourne. Throughout that year, Blackman had busied himself with painting a second group of schoolgirl images, as well as conceiving new images of shopfronts, advertising hoardings, street signs and children playing. Many of these gems – 30 in number – were exhibited from 2-13 November in an exhibition held at Mirka’s Gallery in Melbourne. They were essentially urban paintings. Through them Blackman explored the nuances of mid-century Melbourne and his trademark psychological realism. However, presented with an opportunity to ‘escape’ from the city and pursue a new direction, Blackman took up the opportunity to experience and depict rural life with renewed gusto.

In December 1954, Charles and Barbara Blackman visited their artist-friends Joy Hester (1920-1960) and Gray Smith (1892-1984), who had moved to Avonsleigh to run a chicken farm. They ended up staying in Avonsleigh for six months. Blackman’s biographer, Felicity St John Moore, relates that the Blackmans rented ‘a cottage across the bull paddock in Macclesfield Road … [and that] using the bedroom as a studio, [Blackman] paint[ed] on large sheets of litho paper on the 38" x 54" tabletop transported from the coach house [his studio in Hawthorn].’1

The Avonsleigh paintings proceeded at a good pace, with the majority begun and completed between January and May 1955. Blackman related that this was the first time he had lived in the country and because he painted during the day he only emerged to go out on walks at night. As a result of this, most of the works at Avonsleigh took as their subject figures and buildings shrouded by moonlit landscapes.2 There were, however, a select group of works – Hill Farmer included – that Blackman commenced slightly earlier, in 1954. These were inspired by his first impressions of the new surroundings and local people. In them, Blackman developed his interest in the (often ambiguous) correlation between characterisation and individual settings.

Hill Farmer presents a ‘true’ Aussie farmer – wiry in build, slightly hunched over, with sleeves rolled up and hand laconically placed on his hip. His weather-beaten face is cast in deep shadow and obscured by a broad-brimmed hat. A smaller version of this work – possibly a study – is similar and shows a farmer slowly emerging from the darkness.3

We can only speculate on what the man is thinking about or feeling in these two related, though contrasting, paintings. In the small work, Blackman seems to ruminate on the nocturne as a shadowy and unknowable realm – a place that haunted him in his dreams. However, in the larger and more light-filled painting, the sense of danger or foreboding is less apparent. Blackman places the central figure into a sparse landscape that has been stripped back to essentials. At first sight it is devoid of life and punctuated by a single, dead tree. Luminous bands of grey-green sky, brown hills and an unusual and vividly coloured pink pasture surround them.

The eyes of the man in Hill Farmer are not visible, however we can respond to the general demeanour of the man’s time-honoured resilience and a feeling that he is deeply attached to the land. Perhaps he is pondering the outcome of a new season’s planting – in this case he may simply be waiting or hoping for it to rain. Alternatively, is his intent gaze monitoring the progress of farm animals or breeding stock? The angularity of the farmer’s physical form and his state of mind are reinforced by the stark simplicity of the surrounding place.

Blackman recollected about his time at Avonsleigh that the ‘paper was portable, [which] gave me a direct result – a lot of freedom.’4 In Hill Farmer and other Avonsleigh works, Blackman was able to consistently work on a larger scale than previously. The application of oil paint (and sometimes enamel) thinned by turpentine further increased the fluidity of his working methods and there is an enhanced surface translucency and transparency contained in the large areas of background colour and form. Other paintings to share in this dynamic treatment of the surface include Charles with a Young Girl c1955, with its equally luscious pink tonalities, and a work in the National Gallery of Victoria collection entitled Landscape with Boats (The Bridge) c1955.5

Hill Farmer was exhibited at Peter Bray Gallery, Melbourne, in June 1955. It formed part of a group show that included paintings by Blackman, along with three other up and coming artists: Margaret Bambina, Eric Smith and Clifton Pugh. Blackman’s work was singled out by the Age art critic Arnold Shore for being emotionally charged, with Girl in a Garden ‘the most balanced relation of idea and form’ and Hill Farmer possessing ‘character’ and ‘interesting light areas’. In a review of the exhibition found in the rival Herald newspaper, the champion of modernism Alan McCulloch found a lot to like about Blackman’s new works and how ‘he moves from abrupt drama to an innocent lyricism, derived in part at least from Jean Miro.’6

However, we had to wait for follow up exhibitions to get a fuller account and assessment of the Avonsleigh paintings on paper and their new subjects and radical techniques. Six had been shown at the reconstituted Contemporary Art Society (CAS), when its annual group show was exhibited at the now famous Preston Motors Showroom exhibition in 1955. A more comprehensive group of 30 of the Avonsleigh and Mt Tamborine paper paintings were subsequently exhibited in a solo Blackman exhibition held at the CAS-run Gallery of Contemporary Art, Melbourne, in August 1956.

Once again, the exhibition was favourably reviewed by Arnold Shore and Alan McCulloch. According to Shore, ‘marked individual development earns Charles Blackman first consideration among the artists exhibiting in current shows.’ For McCulloch, the exhibition was further proof of Blackman’s working habits that introduced something new to say with each exhibition. Singing his praises, McCulloch felt that Blackman had entered an entirely new phase in his development with the Avonsleigh paintings: ‘Spatial perspective, dimensions and the dry, luminous medium (oil on paper) complement and enhance each other.’7

The development of these critical ideas about colour and surface were to inform the growing appreciation of Blackman’s work during the 1950s and 60s. With their increased scale, daring compositions, unusual forms and translucent colours, the Avonsleigh paintings introduced Blackman to ways of depicting figures in rural settings and were lauded as a sign of his deep fascination with predominantly nocturnal landscapes.