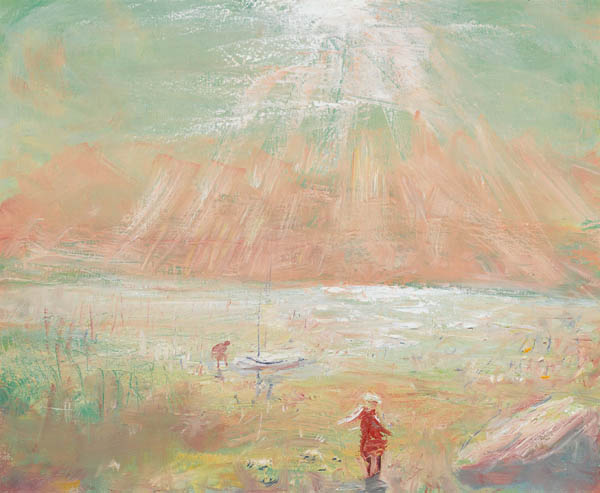 By Asta Cameron in Blog
Lot:
This lot has been withdrawn

Lloyd Rees is one of Australia’s best regarded landscape artists. He won the Wynne Prize twice throughout his prodigious career, firstly in 1950 for The Harbour from McMahons Point and again in 1982 for Morning on the Derwent. His landscape painting prowess earned him many other accolades, culminating in his being appointed a Companion of the Order of Australia in 1985. After his death in 1988, the Australian Bicentennial Authority named him as one of the two hundred people who made Australia great. Rees was a proficient architectural draughtsman, so preferred landscapes that had signs of habitation such as buildings or boats, as we see in the present work. Throughout his career, he refined this interest in the balance between the natural landscape and the built environment, and Early Morning, Lake Illawarra, which was painted in 1976, is a beautiful example of this confluence.

Rees grew up in Brisbane and received formal art training at Brisbane's Central Technical College. He then moved to Sydney and commenced work as a commercial artist in 1917.1 Drawings made up the bulk of his works in these early years, with his pencil drawings of Sydney Harbour becoming known as ‘pencil-paintings’. His oil paintings throughout the 1920s and 1930s were mostly traditional tonal landscapes, likened by many to those of French romantic landscape painter Jean-Baptiste-Camille Corot (1796-1875).

In the 1940s Rees and his wife, Marjory Pollard, and son Alan, spent much time in the Illawarra district of the south coast of New South Wales. Australian artists are often linked with specific areas, Arthur Boyd (1920-1999) with Shoalhaven for example, and in the same way, Rees is associated with the Illawarra. On school holidays the Rees family rented cottages at Werri Beach near Gerringong, half an hour’s drive south of Lake Illawarra, which we see depicted here. While the main road bypassed the lake, the family sometimes took a secondary road that passed the eastern shore where they would make a rest stop.2 It appears Early Morning, Lake Illawarra was painted from this site, looking west towards the escarpment. In 1947 they built a cottage at Werri Beach that was jointly owned by the Rees family and Marjory’s sister’s family, with their brother having built on the adjoining block the previous year. Needless to say, there was always good company on these holidays, and this warm painting seems imbued with Rees’ fond memories of this time and place. Rees himself reminisced, ‘I’m terribly dependent on company… I adopted Werri because I liked to go away with Marjory and Alan.’3

Throughout the 1950s, 1960s and early 1970s Rees spent much time in Europe. The French countryside and sweeping Tuscan landscapes left a lasting impression on the artist which can be seen in his Australian oils. Absorbing details from both hemispheres meant he had an abstract repertoire of landscape forms at his disposal, with Europe and Australia fusing in his mind. As Renée Free explains, ‘the south coast of New South Wales was given the natural and architectural forms and associations of Europe… Europe and Australia are formed into a personal synthesis.’4 The present lakeside vista with its soft light and small boats, could certainly be European, though we know it is vitally Australian.

In his later years, battling declining health and eyesight, Rees became preoccupied with capturing the play of light in the Australian landscape. By the 1980s his works had become opalescent, using translucent colours to give a transcendental mood. Certainly we can see the beginnings of this obsession in Early Morning, Lake Illawarra, as the pale early morning light bursts from the top of the composition, permeating every corner of the canvas with the sunny ambience of daybreak. A true Lloyd Rees treasure, Early Morning, Lake Illawarra brilliantly combines the artist’s ability to capture light, his unification of European and Australian landscape styles, and his adoration of the Illawarra region.