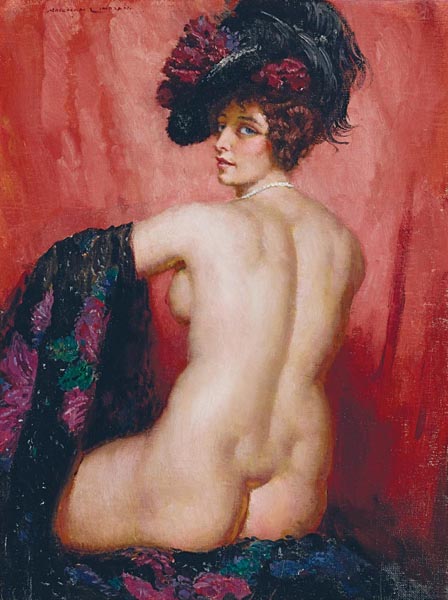 Norman Lindsay was a self-confessed devotee of the female nude in art, viewing the female image almost as a pathway to the divine. He is quoted as saying, ‘I have taken the feminine image as a dominant factor in my concept of life, both because I love the beauty of women, and because they are the continuity principle which drives life eternally on into the future…’1 The artist’s well known and exuberant visual explorations of the playful, erotic, sinister and sometimes comedic side of human affairs, were conducted via his ongoing representation of women. Earlier in his career this was often in the context of large mythological scenes, but by the 1930s he had begun to focus on singular nude studies such as that seen in the present work.

A number of factors prompted this turn in focus. Lindsay was in his fifties with a well-established career in the graphic arts when he decided to master oil painting. The unrivalled ability of oil paint to describe the tactility of flesh was no doubt a major enticement for this artist so dedicated to the feminine image. Taking a studio in Bridge Street, Sydney in 1932, he was able to dedicate his attention to exploring the medium of oil painting, and he would regularly work with models in the studio to do so. Thus in the paintings from this period onwards, nude women often appear isolated from distracting contextual melodrama of his earlier allegorical scenes, and rather became sole subject of the artist’s focused attention.

The present work exemplifies Lindsay’s approach to the studio nude, where his subject is composed with artfully placed props, in this case an elaborate hat and shawl draped over one arm, and very little else to distract from the study of her form. Lindsay took his work with models seriously. The challenge of painting from life and capturing the form of his sitter in a limited time frame was mentally and physically strenuous – a task to which he applied “years of severe study from the model.’’2

In the present work this focused study is directed to the model’s back, describing and perhaps exaggerating its curved lines and musculature to further enhance this area of the body’s expressive potential. The female nude as a vehicle for emotion, desire and all manner of internal states that affect the human condition is one of visual art’s oldest subjects. In the present work Lindsay continues along its well-established traditions to evoke a mixture of seduction, vulnerability and strength. The model’s lifted arm and turned head are intended to suggest she has been caught off guard, as if removing the garment draped over her arm in a moment of vulnerability. Yet the muscular tone of her back denotes a bodily strength that is echoed in her self-assured stare that returns the artist’s male gaze.

Lindsay worked with a number of models on a regular basis who are distinguishable by their physical features, and the present work may very well feature Rita Lee. Reportedly the daughter of a Spanish mother and Chinese father, Rita’s exotic beauty captivated the artist and he produced a number of paintings of her during the late 1930s and early 1940s.

Back Nude Study reflects the skillful adoption of oil painting techniques that Lindsay had arrived at by the early 1940s, as with sensitivity to light and tone he deftly renders the scene in glazes of oil paint. Like the best of Lindsay’s nudes, this work presents an unashamedly sensual and celebratory depiction of the female body, which for the artist acted as the ultimate vessel of beauty and sublime inspiration.