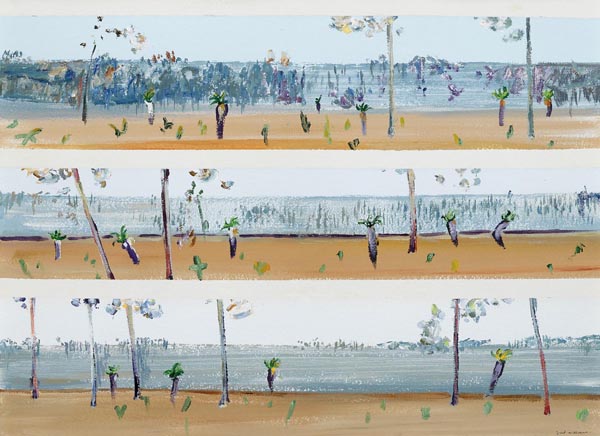 Fred Williams is among a tiny handful of Australian artists whose works have reached more than one million dollars at auction. In his case, on more than a dozen occasions. It is testament to the consistent quality of the paintings he produced and also the special place they hold in the imagination of many Australians. Unlike some of his contemporaries, Williams was extremely thoughtful and disciplined about what he allowed onto the market and was quick to destroy anything that did not meet the high standards he imposed upon himself. A consequence of that view is that one never sees what might be called a ‘lesser work’ or one of questionable quality. Certainly there is a great variety - large works and small, quick studies, carefully rendered etchings and boldly brushed paintings, but his work is always somehow complete and satisfying. What is perhaps even more remarkable is the fact that his mature working life spanned just twenty-six years, from his return to Australia in 1956 until his death at the young age of fifty-five years in 1982. Williams had enrolled at the National Gallery School evening classes from the age of sixteen and undertook full time study there in the immediate post-war years. He balanced the strict academic discipline with weekend classes with the modernist George Bell (1878-1966). But even after six years of study, Williams felt there was more to learn and in 1951, like so many of his contemporaries, he took passage to London to study at the Chelsea School of Art. Formal training and a steady round of gallery visits broadened his view of art and, lacking the funds for a large studio, he worked in the main as a printmaker, producing a large number of etchings based on the figure.

Fred Williams returned to Australia in 1956, a time when the country was changing rapidly, with a new sophistication brought on through such events as the Melbourne Olympic Games and the introduction of television, as well as the surge in European migration that was to change the tastes and outlook of the nation. Making landfall in Perth after five years in the soft light of England, he was stunned by the brilliance of the Australian light and the random, seemingly unstructured landscape of the ancient continent. He quickly left his quaint music hall subjects behind and began to paint the landscape exactly how he saw it. Had he been reading the art critics’ columns in the local papers when he was a young man, he would have noted how much of the discussion revolved around the choice of a picturesque subject, rather than any real discussion of the art itself. His own approach was far more direct and, whether in the Southern Highlands of New South Wales or the Dandenong Ranges to the east of Melbourne, he would simply set up his easel at any convenient roadside stop and paint whatever forms appeared before him.

While many of his larger landscapes envisage the land as a vertical plane reaching up to a high horizon, he also began to make studies where the unrelenting horizontality of the landscape was rendered in an extreme widescreen format. He would make a series of gouache studies of the land, with its rough fallen trees, random boulders and burned off grass, masking off a succession of frames arranged vertically on the sheet. While each is a self-contained image, they build up into a ‘stacked’ series of vignettes, almost like a comic strip awaiting the appearance of the cowboy hero. There was a clear precedent for this form, which had resonances in an important series he made at Deal Island, just off the Gippsland coast in Bass Strait. Early topographical artists would depict the coastline of new lands in just this way, with headlands, bays and islands being carefully described in a series of drawings, placed one below the other, down the page as their ship moved along the coast. In a similar way, Williams would take his gridded page and make successive studies of the landscape, each vignette seen as though the view from a moving vehicle, or perhaps a long train jouney across the wide, flat plain.