24. JOHN PERCEVAL After the Bushfire 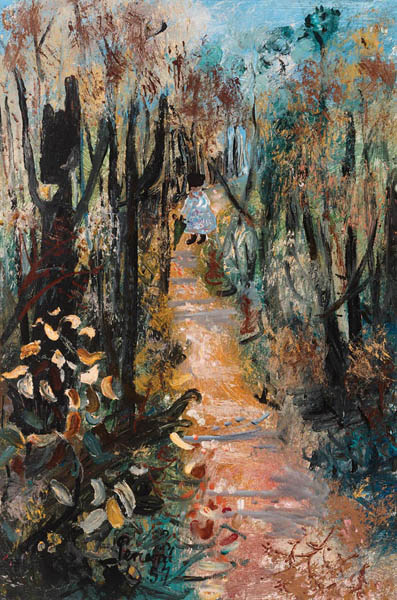 24. JOHN PERCEVAL After the Bushfire

By in Blog
Lot:
After the Bushfire

After the Bushfire 1957 belongs to John Perceval’s most exciting artistic period and marks a significant shift in his oeuvre. The late 1950s saw the culmination of his career coming to fruition and his most interesting stage, producing oils that are alive with ‘wild untrammelled joy’.1

After several years of specialising in ceramics Perceval returned to painting with the highly praised exhibition of 1956, Paintings by John Perceval at Australian Galleries on Derby Street in Collingwood, which also marked the grand opening of the now renowned gallery. This exhibition was a catalyst for the artist’s prominence as a leading Australian landscape painter - it presented audiences with his uniquely vibrant, fresh interpretation of Australia, depicting landscapes of Gaffney’s Creek were he would paint with Arthur Boyd (1920-1999) and boat scenes around his beloved Williamstown.

The mode of landscape painting at the time led by the likes of Arthur Boyd, Sidney Nolan (1917-1992), Russell Drysdale (1912-1981) and company was characterised by dry, arid, harsh and uninhabitable representations of the Australian bush; sparse, thirsty and rugged. By contrast, Perceval’s paintings breathed new life into the mix - his vibrant, spirited paintings constructed with quick brushstrokes were exuberant and full of energy. Perceval’s palpable and infectious joie de vivre resonated with audiences.

In the late 1950s John Perceval’s paintings solidified his departure from the Angry Penguins movement in favour of gaining inspiration from the impressionists and more traditional forms of landscape painting. The present work, After the Bushfire 1957, is a good example of how the artist evokes the painterly rendering of light in and amongst nature in the style of the European masters, whilst revisiting the use of colour by early Australian greats; Charles Conder (1868-1909) and Arthur Streeton (1867-1943).

The present work depicts a winding path on which a girl with an umbrella wanders leisurely. Perceval pairs this classically romantic subject matter: a lady in landscape, within a regenerating landscape that is both burnt from the past fire whilst showing signs of new life emerging. Underpinning his art is the notion of breaking down a system of the past and making way for the unexplored, potential and hope, the fertility of humanity and limitless possibilities for renewed and rejuvenated life.

In 1955 Perceval purchased a small car that enabled him access to his rural soundings and liberated his practice. He travelled freely all around regional Victoria at his whim. He took his equipment, set up outdoors and painted en plein air like the masters of Impressionism. The late fifties were arguably his most exciting years; the landscapes produced at this time exuded a lust for life. The present work is a fine example of the artist’s vigour, spontaneity and sensitivity to the bush. The eye is drawn in and out with pulsating movement. It gives a feeling of airiness, breathing through the crevices of the leaves, shrubs and branches. The application of paint is tactile, sensitive, fluid and intuitive.

In his survey on Australian landscape painting, Bernard Smith likens Perceval to Hans Heysen (1977-1968) in the way that they both reveal deep affection for the scenes they painted.2 Margaret Plant further notes that ‘Perceval paints every picture as though it were his last. Conception and execution are simultaneous, in the heat of the moment. Most painters who share this characteristic are dependant to a large extent on happy accident, but Perceval is fortunate in being able to achieve a complete identification of himself with the subject’.3 In this sense he is a modern impressionist, an advocate for painting’s traditional history.

The present work was exhibited at David Jones’ Art Gallery, Sydney in 1957 to great public reception. Following the successful exhibition Perceval went on to win the Wynne Prize for landscape painting in 1960.