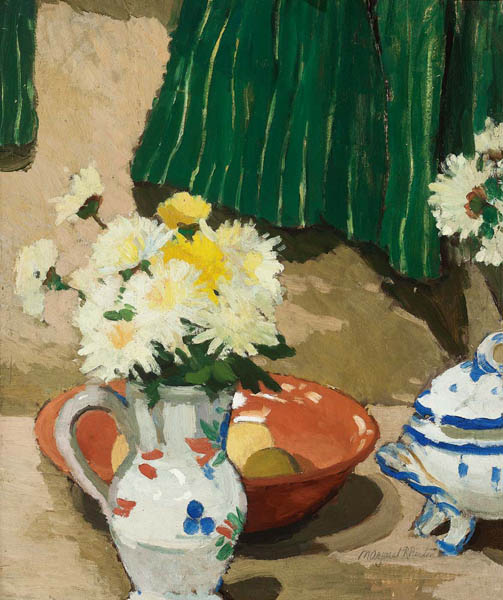 By in Blog
Lot:
The Green Curtain

Margaret Preston painted The Green Curtain in London towards the end of her second trip to Europe, a stay that lasted for seven years – from 1912 to 1919 – and was of critical importance in shaping the direction of her art. During that period her still life painting transformed from the highly skilled tonal naturalism that had been admired in Australia to a practice grounded in pure colour, decoration and underlying structure, values informed by her encounters with European modernism and the formalist and post-impressionist theories of Clive Bell and Roger Fry, and her study of Japanese ukiyo-e printmaking.

The Green Curtain represents a pivotal moment in the artist’s practice and life, on the cusp of her return home and her new identity as Margaret Preston. It was probably painted around the time the then Margaret McPherson met Australian William Preston in England where he was serving in the AIF; they married in Australia at the end of 1919.1

Following Preston’s return to Australia, still life painting was the crux of her program to create a distinctly Australian modern art and visual culture. Her studies in the techniques and motifs of non-Western art, at the Musée Guimet in Paris and the Victoria and Albert Museum in London, opened her eyes to the formal and decorative possibilities in the art of the Australian aborigines.

As a young artist in Adelaide, Margaret Rose McPherson had made an early commitment to the genre of still life, perceiving it as a vehicle for constructing meaning through ‘the affinities of objects’ and the representation of the everyday. On her first trip to Europe in 1904-1906 she had travelled through Italy, Germany, France, Britain and the Netherlands, studied the old masters and, in Paris, sought out modern painters; she absorbed the importance of Cézanne (1939-1906) in pictorial construction and the influence of the fauves – whose work she viewed at the 1905 Salon d’Automne – on colour in contemporary painting.

The Green Curtain is an apparently simple, but tightly controlled arrangement of domestic objects, in the shallow space of early twentieth-century modernist painting. The composition is basically divided diagonally, the objects placed off-centre creating a certain instability, heightened by spatial flattening of the foreground, with the surface on which the jug, bowl and lidded tureen sit tilted and pushed towards the picture plane. The vibrant green block of the curtain anchors the painting in the top right corner, just balanced by the red bowl and white jug with massed daisies.

The audacious precariousness and vigorous colour of this painting suggests how attentively the artist had been looking at the works of Cézanne and Gauguin (1848-1903). Its complex asymmetry, like the Japanese prints she studied in Paris and London, produces an overall effect of harmonious balance. In the decorative rhythmic distortions of The Green Curtain Preston’s achievement in liberating her art from academic naturalism while still retaining its fundamental connection with realism is exemplified.

Preston is one of the most celebrated of Australian modernist artists and has been the focus of significant scholarly attention in Australian art history since the 1970s. Her work has been the subject of a number of important exhibitions, most notably Margaret Preston, curated by Deborah Edwards and Rose Peel, with Denise Mimmochi, for the Art Gallery of New South Wales in 2005. She is rightly regarded as having made a truly original contribution to an independent Australian visual culture, through her hybrid paintings, prints, textiles and ceramics, which incorporated European modernism, and Asian and Aboriginal art forms in an energetic re-imagining of national identity in the modern world.

1. The work is signed, as with others from around this time, ‘Margaret R. Preston’, although she did not marry William Preston until 1919; clearly the signature post-dates the painting.