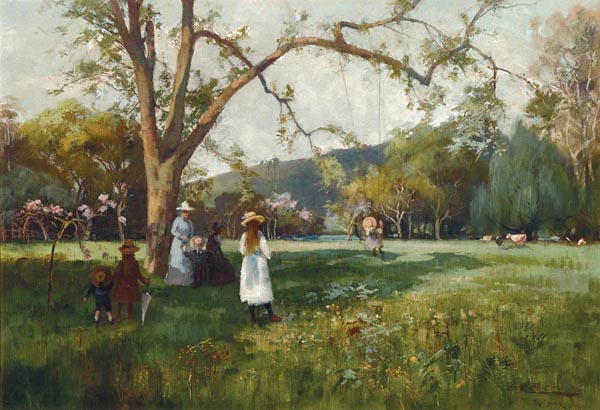 By David Thomas in Blog
Lot:
The Swing

The big names of Australian painting of the 1880s and 90s still dominate the public and private mind to the detriment of both a whole range of quality artists and collectors who are unfamiliar with their work. Albert Henry Fullwood is an excellent example and The Swing is a classic painting with which to make this point. His association with Tom Roberts (1856-1931), Arthur Streeton (1867-1941) and Charles Conder (1868-1909) is generally known and their influence on his artistic development is apparent and highly beneficial. But how close that association was and how Fullwood’s art blossomed under their several influences is not that well appreciated. Along the top coterie of that time, Roberts was known as ‘Bulldog’, Streeton as ‘Smike’, Conder as ‘K’ and the Melbourne-bound McCubbin as ‘The Prof’. Few can claim to know that Fullwood’s nickname was “Uncle Remus”, courtesy of Streeton and Fullwood’s own ability as a raconteur. It was given to him when he attended the Curlew Camp at Sirius Cove on Sydney Harbour in the early 1890s.

The Swing is a painting that is highly evocative of spring, expressed in the pink blossoms, verdant setting and the activities of the groups of young people and their minders. This was a season much liked by his contemporaries and seen best in the youthful works of Streeton and Conder, delicate in their transient beauty. Conder was unrivalled in his pink-blossomed paintings of Griffith’s Farm at Richmond in 1888, a fine example being Spring Time 1888 in the collection of the National Gallery of Victoria. A similar work by Fullwood, Early Spring Near Richmond 1888 (private collection) successfully assimilates the decorative charm of Conder into the more ordered structure of Fullwood’s compositions.1 Before leaving for Melbourne in late 1888, Fullwood, too, had painted at Griffith’s Farm with Conder and Percy Spence, the orchards in full springtime blossom providing some ideal subjects. With Conder now also in Melbourne, many of the Sydney artists met up with their plein air counterparts to the continuing benefit of their art. This was continued in Sydney after 1891 when Roberts and Streeton settled there. Consequently to this period ‘we owe the emergence of A. H. Fullwood and Percy Spence, who under the guidance of Streeton, Roberts and Conder, when they had been painting with them in Sydney, produced some of the most exquisite little gems of Australian art that we are able to enjoy today.’2The Swing is one such gem.

1. See Eagle, M., The Oil Paintings of Charles Conder in the National Gallery of Australia, Canberra, 1997, illus. p.281. Early Spring Near Richmond was exhibited in the Art Society of New South Wales exhibition of September 1888 under the title, The Goose Girl
2. Robson-King, F., ‘The Shadows in Impressionism; some lesser known painters of the Australian Impressionist School’, Australasian Antique Collector, no.19, 1979, p.77