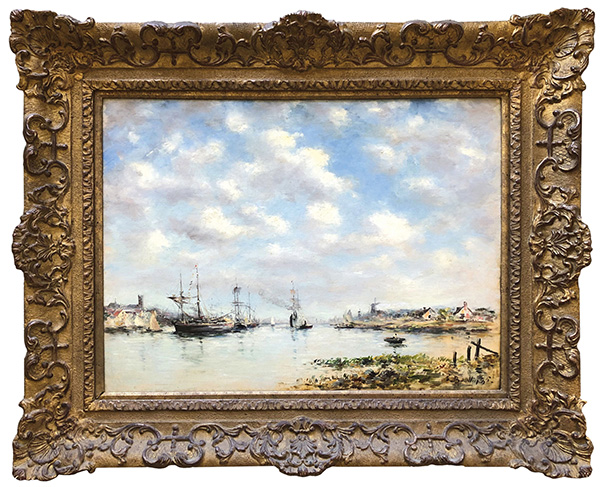 Eugène Boudin’s free brushwork, contemporary subject matter and attention to atmospheric effects are evident in this delightful work.   He was one of the first French artists to extol the virtues of plein air painting, and he encouraged the eighteen-year-old Claude Monet (1840-1926) to do the same.  At the end of his life Monet told his told his biographer Gustave Geffroy: ‘I have said it and I say it again: I owe everything to Boudin.’1 Looking at The Meuse near Dordrecht 1885 today it is not hard to see how Boudin links traditional marine painting (particularly the Dutch School) with the new freedoms of Impressionism. Indeed, Boudin was invited by his young protégé to show in the first Impressionist exhibition of 1874 that ushered in a new generation of artists and a new epoch in art.

Boudin was part of a revolution: from the 1840s, the health benefits of sea bathing and the increasing reach of the railroads had brought tourists to the beaches of Normandy. And artists were more than willing to supply the holiday makers with picturesque views, increasing the demand for landscape paintings.  Simultaneously, the role of the open air sketch took on greater importance, initially as a study for a ‘finished’ work, but ultimately as an end in itself.  Paintings made on the spot were increasingly perceived as more authentic than the contrived and ordered scenes built in the studio.   Boudin himself noted that ‘everything painted on the spot always has a strength, a power, a vividness of touch that is not to be found again in the studio’.2 The invention of the collapsible paint tube as well as portable easels made it easier to work in the scenic locales made available by rail. Boudin’s paintings of tourists, an unconventional subject at this time, gave his work a modern feel and this, coupled with his direct observations, brushy notations of light and sky and development of a light - even blonde - palette, exerted a persuasive influence on younger painters.

The son of a harbour pilot, he was essentially self-taught. He lived for a time in Paris copying works in the Louvre where he discovered the naturalistic landscapes and marine paintings of the Dutch school. His busy paintings of Parisian holiday makers - the ‘crinolines on the beach’ - and atmospheric views of the Normandy coast established his reputation.  He regularly showed his works at the annual Paris Salon and indeed, The Meuse near Dordrecht was exhibited at the Salon the year it was made.

After 1871, Boudin began to explore further north along the Belgian and Dutch coasts.  It was his habit to summer at the seaside sketching and painting, then work in his studio in Paris over the colder months. Given his fascination with Dutch painting it is no surprise that he made many visits to the Netherlands to paint its busy ports and cities. He visited Dordrecht on several occasions, painting the streets and hinterland but predominantly recording the views from the Meuse River as it curves around the city.  He made at least a dozen paintings there in 1884, many showing the city and the spire of the Grote Kerk (the Church of Our Lady) as a backdrop to the bustling docks and shipping, as does this work. Dated 1885, this work may have been the last of this group and finished in the studio in time for the first of May opening of the Salon.  Boudin’s practice of painting the same subject from multiple points of view may well have inspired Monet to paint his series on Rouen Cathedral, the Houses of Parliament and other locales.

In The Meuse near Dordrecht Boudin has placed himself behind the limpid, open pool where the Oude Maas (the Meuse) meets the Beneden Merwede and Noord Rivers. Depicted with licks of black and red paint, a small steam tug centres the composition, hauling a bigger ship from its berth, leaving the tumble of masts and the spire of the Grote Kerk behind. The windmills of Zwijndrecht (then a tiny village, now a suburb of Rotterdam) can be seen on the right and the spans of the iron railway bridge into Dordrecht hold the low horizon line. As always, the artist devotes nearly two thirds of the painting to the sky, crowning the sunny vista with fluffy altocumulus clouds, suggestive of change.  Boudin paints with a persistent vitality and freshness, his midday warmth and fleeting sunshine demonstrating his ability to charge atmospheric effects with an emotional subtext. Camille Corot (1796-1875) praised him as ‘the king of the skies.’3 Here, in this vivid harbour scene, Boudin’s keen eye has captured the lazy smoke trails, bobbing ships and slow moving rowboat against the shimmer of still water to describe a windless noon, a brief moment of tranquillity.

The overall harmony of grey and cerulean blue is divided and animated with deft touches of black and red across the central silver greys of the town and attendant vessels, and finally anchored with broad strokes of green and ochre paint to block in the shallow river bank.  A virtuoso demonstration of the artist’s confident, free brushwork, the painting also communicates Boudin’s enjoyment of his craft.  It’s not hard, looking at The Meuse near Dordrecht, to feel the warming sun and the touch of breeze, hear the lap of waters and the clink of hawsers and yards, sense the low hum of a city in the distance, and feel satisfaction in the sensation of being there too.

A significant international artist, Boudin’s work is held in numerous major galleries and museums around the world as well as state galleries in Australia.