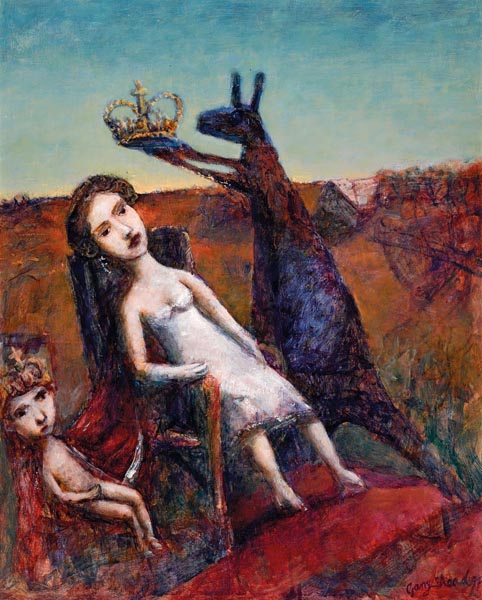 Garry Shead has established a reputation as one of Australia’s foremost contemporary figurative artists. His scenes transpire in a uniquely Australian context established by the likes of Russell Drysdale (1912-1981), and Arthur Boyd (1920-1999), who also used figurative narration to create an idiosyncratic vision of the Australian experience seen through a ‘mythic lens’.1 His art invariably contains a narrative bent, a whimsical tone, and a distinct figurative style that evokes both the poetic and lyrical.

Shead studied at the National Art School in Sydney in the 1960s. He became involved in publishing, contributing to his student magazine at university and working as a freelance cartoonist while making art and developing his creative practice. Shead began creating images of the Queen as early as 1962 in the form of cartoons for Oz, the underground satirical magazine which famously became the subject of two obscenity trials.2 He struggled with depicting the monarch’s dual role - as both the very public head of state and also the beautiful, vulnerable human behind the royal facade. The artist began the Royal Suite paintings in 1995 and although Shead ‘could be described a republican’,3 the timing saw these works become involved in the republican debates of the late 1990s - this however, was not Shead’s intention for the series. Art historian Sasha Grishin, describes the Royal Suite series as ‘historical paintings…looking back to the Australia of the 1950s when the omnipresent figure of Menzies dominated.’4

In the present work, the artist has depicted a coronation scene with a distinctly Australian bent. The composition is set against a backdrop of rust and ochre-toned hills with a small, corrugated-roofed cottage to the right. An infant bearing a crown is seated on the right-hand side of the monarch, bearing witness to the scene that is playing out – perhaps a representation of her royal consort or the artist himself. The Queen is seated, half in repose, as the kangaroo ceremonially places the crown atop her head. Shead portrays the ‘white goddess’ in a dream-like state, gazing into the distance. The pale blue sky is tinged with a dusk light that falls across the scene, adding to the lyrical beauty of the work.

Shead’s Royal Suite of paintings to which the present work belongs, aided the upward trajectory of his career in the 1990s, stimulating a keen market for his work and reflecting his artistic maturity. In this highly original series of paintings created between 1995 and 1998, Shead charts the imagined progress of Queen Elizabeth II and her royal consort, Prince Philip. The works refer to the Royal Tour of Australia in 1954, when the Queen toured the nation and caused a sensation everywhere she went. At the time her visit was viewed with unbridled excitement and enthusiasm as she descended almost as a deity upon colonial shores – the first reigning monarch to ever do so.