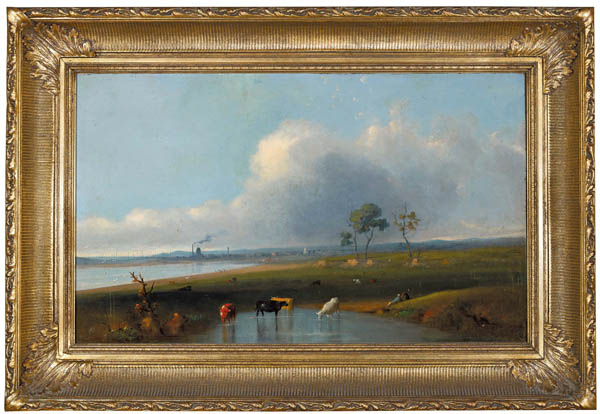 By Rodney James BA (Hons.), MA in Blog
Lot:
Sandridge from the Lagoon

Mid-nineteenth century Australian art is regaled by the names of artists who came for the gold but ended up putting far more back into their adopted country than what they took out. Eugene von Guérard (1811-1901) and S. T. Gill (1818-1890) are two of the best-known artists to have ventured to Australia during the 1850s gold rush. To that esteemed company we can add talented painters, illustrators and lithographers including Henry Gritten (1818-1873), Edwin Roper Loftus Stocqueler (1829-1895) and Henry Burn (1807-1884).

Henry Burn was born in England and emigrated to Australia in October 1852. He had already made a name for himself as an artist in his native Birmingham, exhibiting at the Royal Academy and the Birmingham Society of Artists in the 1930s. Between 1840 and 1852, Burn travelled extensively around England producing topographical views of towns ‘as far north as Yorkshire, [and] as far south as Dorset’.1

Victoria, in the second half of the nineteenth century, was a place of tremendous possibility and growth. Melbourne and other regional centres developed at an unprecedented rate, with the Victorian capital eventually becoming one of the largest and richest cities in the world. Arriving aboard the barque Baltimore in January 1853, Burn quickly set about tapping into this new-found optimism. The Argus refers to a watercolour of a view of Melbourne that Burn completed in December 1853.2 He hoped to lithograph and sell it through public subscription.

Although not successful on that occasion, undeterred, Burn continued to explore and capture Melbourne and its environs through a series of evocative paintings, watercolours and prints. Many of these were painted or produced not far from where he lived in inner-city Collingwood. In 1869, six of Burn’s watercolours were included in a loan exhibition at the Melbourne Public Library while in the following year, he was invited to exhibit in the inaugural exhibition of the Victorian Academy of Art. This exhibition was opened with much fanfare by Melbourne’s developing cultural elite in 1870 and included a work by Burn simply entitled Sandridge.

Sandridge from the Lagoon c1870 was painted from a vantage point in St Kilda, possibly near the Point Ormond Lagoon.3 The picture looks north across Port Phillip Bay toward the port and industrial township of Sandridge (later Port Melbourne). The factory and smoking chimney stacks of the Victorian Sugar Company, Sandridge, are clearly visible in the distance as well as the masts of the docked ships in Hobson’s Bay and the lower Yarra.

Burn’s picture presents a tranquil, almost bucolic, setting of cows grazing and drinking toward the end of the day. It exemplifies his ability to depict his chosen subjects with a high degree of accuracy and finesse as well as a penchant to embellish those attributes with subtle renderings of passing clouds, glowing light and gentle reflections and shadows.

Sandridge and the fringes of Port Phillip Bay from St Kilda to Brighton were popular painting spots for artists. There are four known works with a similar view that Burn painted in the space of two years. The earliest of the four works are a watercolour titled Sandridge from the Point Ormond Lagoon, dated 1869, and a small oil with the same title, dated 1870 from the Geelong Gallery collection. Both pictures are delightfully light and airy evocations, attributes that are continued in Sandridge from the Lagoon.

Collectively these paintings reveal Henry Burn’s ability to faithfully reproduce prominent landmarks and buildings and a talent for capturing local colour, light and atmosphere. The subject and viewpoint also show how Burn led the way in highlighting Melbourne at the cusp of its transition from a small colonial settlement to a modern metropolis.

3. There is some conjecture regarding the precise spot the work was painted from. Contemporary maps such as one by Henry L. Cox, printed in 1866, show that there were a plethora of lagoons and low-lying areas situated from Elwood as far up as present-day St Kilda West.