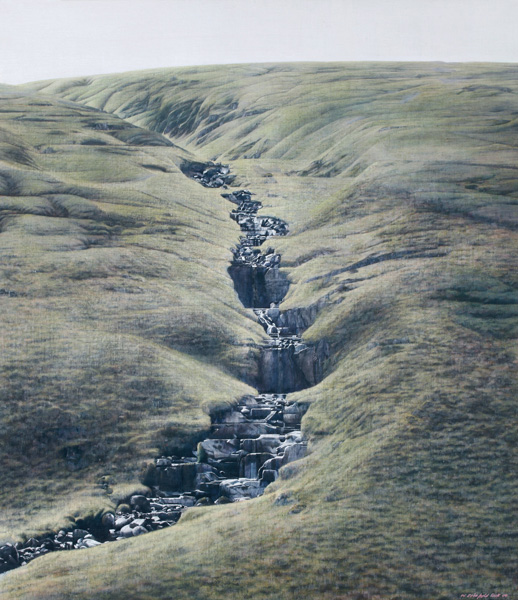 The landscape paintings of William Delafield Cook are distinctive and reasoned. They are complex depictions of rivers and rocky flats, but despite their pinpoint accuracy, the paintings also speak of memory. They are formal takes of the landscape in which neither bird nor personage resides. The impression is vivid, as if the image, as was once suggested, is a moment between two breaths.

Delafield Cook was an inveterate traveller as he was expatriate as a painter. Delafield Cook would arrive in Australia and then drive with wife Sally, and often a full complement of children, to take in, as he put it, ‘the hit’ of Australia, and to find the ground upon which he could compose a painting. The description of Australian landscape is one of green and brown expanse and a brightness that arrows to the horizon. For Delafield Cook, this was a beginning, but he needed a point upon which his argument might turn. Using a camera to frame and order, Delafield Cook moved through the landscape, the camera a referent, and a means to record. Painting is a system no less, but the camera has its own realism, and this point – where painting and photography meet – became central to the art of William Delafield Cook.

The revisiting of Australian landscape and the completion of paintings in his London studio gave Delafield Cook a working method. The comparison is made as easily to Sidney Nolan (1917-1992) who also travelled broadly. Similarly, for Delafield Cook, images held in the mind gave his pictures a distanced view, made apparent by the composition and the cropping of each image.

Complete as they are, Delafield Cook’s paintings appear to be more than the sum of their parts. Debra Hart has made the comment that:

In Cook’s painting the notion of ‘an ideal’ in the context of the Australian landscape is revealed in paintings which are not about very much in a direct sense. Instead, they are reflections of the ways in which the environment, in all its neutrality and apparent emptiness, is in fact informed by small and large incident – rocks, stones, branches, tracks – if one is prepared to look long and hard enough; while the space in landscape itself informs contemplative space.1

Waterfall 2004, our present painting, is a masterful hillside composition that shimmers with light. Each careful stroke adds a heightened realism and a vast sense of scale to the view. How Delafield Cook came to this image, we believe, a composite view, is intriguing. In December 1979, Delafield Cook undertook a study and the pursuit of Eugene von Guérard (1811-1901), the European painter who came to Australia in the 1850s. Cook was taken by von Guérard’s own research and the dedication the artist had to topography and geology, and, in particular, von Guérard’s Waterfall, Strath Creek 1862 (Art Gallery of New South Wales Collection). Delafield Cook travelled to Strath Creek waterfall to make his own observations and to compare the von Guérard painting with the grandeur of the site itself.

The resulting Delafield Cook painting, A Waterfall (Strath Creek) 1980-81 (Art Gallery of New South Wales Collection), is similar in composition to the von Guérard painting. The palette differs, but it is another season, yet the ascent is equally steep and the fall of the water unchanged. This dedication to place and to artistic endeavour sounded a strong note for landscape painting and, accordingly, the Art Gallery of New South Wales awarded the painting the Wynne Prize in 1980.

The fall of water is the also the axis of Waterfall. It is the line that ladders the composition, and our eye follows readily. Light falls on the surface of rock and plays highlight against deep shadow. Up we step, and as we do, the ascent becomes more difficult, foolhardy. What seemed a fair hike, quickly converts to great height, tending to monumental. What once was habitable now seems grand, memorialised.

And here, in Delafield Cook’s Waterfall, is the clout of Cook; the difference between place and what is felt, is quite different. It is all fidelity, pinpoint (again), in the hands of the painter, and all to leave a trace of memory. It has been the paradigm for this enduring artist and, in Waterfall, Delafield Cook has created an image of classic proportions but with the reckoning that in any plain view, we see multitudes.