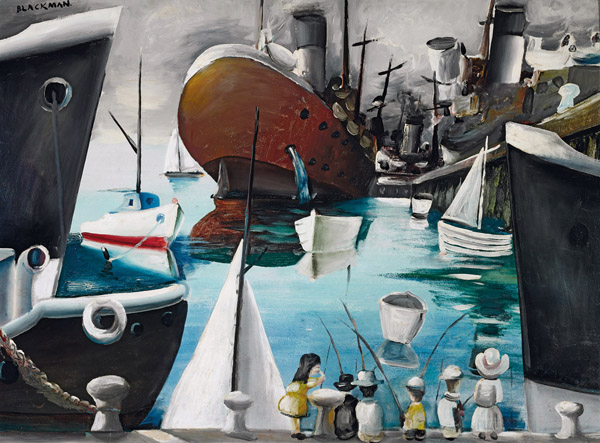 The mid-1950s were a defining moment in the development of Charles Blackman’s art. Having relocated to Melbourne with his wife and muse Barbara in 1951, Blackman achieved early critical notice with his 1953-4 Schoolgirl series of paintings. Following a series of Avonsleigh landscapes in 1955, the 28-year-old self-trained artist embarked upon the theme of Alice in Wonderland. In 1956, Blackman painted over 40 major works exploring different episodes of Lewis Carroll’s 19th century classic children’s book Alice’s Adventures in Wonderland 1865 and its sequel Through the Looking-glass and What Alice Found 1871. This important painting, Boats at Williamstown 1956 was produced concurrent to Blackman’s Alice in Wonderland paintings. It headlines a select group of oil paintings, pastel and ink drawings that he produced in response to Williamstown, a historic inner-city Melbourne suburb and port.

Sailing boats and maritime vessels often feature in the art of Charles Blackman. He developed his love of the ocean and the marine environment growing up in Seaforth and Manly in the 1930s and later, back living in Sydney as well as coastal Queensland. His signature motif of the mysterious and often empty sea-going vessel has its origins in both personal observations and imaginative experiences. Redolent in childhood memory, emotionally engaging and full of reverie, such masterly drawn and painted sea-images also reveal the artist’s fertile engagement with late 19th and early 20th century Symbolist and Surrealist art and poetry – part of a lifelong quest by Blackman to convey the nuances and resonance of an inner world beyond that of surface appearance.

Charles Blackman first visited and painted at Williamstown with fellow artist John Perceval (1923-2000) in 1956. The two artists had recently moved close by to one other in Melbourne’s inner east and started to go on painting trips to Victorian locations including Mallacoota, Hurstbridge and around Port Phillip Bay.

Blackman later intimated how much he enjoyed painting with Perceval, and the ‘really great outdoor experience of painting, every Sunday, all day’ at Williamstown together. The two artists shared ideas, motifs and techniques, with Blackman later describing how this artistic exchange led to some of their most intriguing works and exciting pictorial discoveries.1 Sometimes they painted in company with artist friends including obstetrician and art collector Hal Hattam (1913-1994) and Arthur Boyd (1920-1999). Often their respective families and friends would picnic nearby, while the artists explored Williamstown from a range of aspects and at different times of the day.

Blackman paid homage to Perceval at one of his favourite painting spots on the side of Williamstown that stretched toward Altona. Portrait of Perceval at Williamstown 19562 is a large and accomplished drawing that depicts Perceval skylarking on the rock groyne of a man-made breakwater and small port on the western end of Gloucester Reserve, known locally as ‘the secret boat harbour’. A haven for fishermen, small-craft and water birds, the same place features prominently in important paintings by Perceval from the same year including The Splash (private collection) and Gannets Diving from the National Gallery of Victoria collection.

Reflections, Williamstown 1956 (private collection) is Blackman’s response to the same location. It reveals how he was revelling in a freer style and more spontaneous brushwork based on his interactions with Perceval. Blackman clearly enjoyed painting his surrounding environs and responding to the vicissitudes of nature and the natural world. However, the luminosity and stillness that pervades the waterways and sky as they seamlessly merge into one underscores his more painterly approach. Blackman constructs an elaborate network of fanciful shadows, strange mushroom-shaped buoys and boats that float weightlessly on the water. Each of these elements add to the poetic lyricism of the scene and the aura of mystery and otherworldliness. This was something that Blackman pursued in both the related Boats at Williamstown and his Alice in Wonderland paintings from the same time.

Boats at Williamstown can also be fruitfully compared to other Perceval paintings of Williamstown including Tugboat in a Boat and The Hull, both from 1956. However, hereto, we see Blackman ingeniously transforming the subject to make it his own. Stretching the idea of naturalistic form and colour to its limits, Blackman cross-fertilises artistic experimentation with literary ideas and visual motifs.

On one level, Blackman succinctly captures the look and feel of the Williamstown docks – the different types of sea-craft that share anchorage with larger ships, the stream of water being pumped out from the bilge (albeit, more of a waterfall and emanating from a porthole!), formidable timber wharves reminiscent of Gem Pier, heavy rusted chains and painted metal bollards and billowing, sooty smoke. In subject and technique, Blackman employs a range of methods to convey the sensation of being amidst the action rather than just looking in.  He contrasts the industrial grittiness and claustrophobic space of the right corner with the more alluring and placid open seas of the bay on the far left and stationary craft with a yacht under sail. The realistic use of dripped enamel paint scratched horizontally with the pointy end of the brush creates the look and feel of foam-crested water as it interacts with the boats.

The addition of the group of six children fishing from the wharf adds a further dimension that augments the reality of the setting and exemplifies Blackman’s imagination. He has a fascination with the innocence of childhood and how the world can be seen and experienced through their eyes. Their presence humanises the scene and adds an element of levity and joyfulness. Through them, we are invited to view the scene through the smaller timber boats and sailing vessels that resemble bathtubs and other fanciful shapes. The imposing scale and potentially more threatening forms of the surrounding grey-hulled ships take on anthropomorphic qualities and are positioned at oblique angles above the children’s eye level. It is as if they are giants coming together to converse, their portholes and life buoys resembling over-sized eyes.

The idea of seeing the world through the eyes of a child and a topsy-turvy world in which inanimate objects are brought to life was of course the central theme in Blackman’s Alice in Wonderland series. In this respect, Boats at Williamstown provided an important bridge to one of the major works from that series Alice in the Boat (All on a Summer’s Day) 1956. Blackman later commented that the colours of this painting were ‘pure plein air Williamstown’,3 with its sonorous, deep blue that extends from the sea into the sky. More than that, Blackman imbues the boat as it floats down the Thames into open sea with the promise of freedom and self-knowledge. Shadows cast into the water in both paintings are a subtle prompt that Blackman’s art is largely autobiographical and that, for him, art in all its manifestations mirrors life.4 Lewis Carroll and the 19th century Symbolist poetry of Arthur Rimbaud provided Blackman with cogent perspectives on the relationship between boats and the journey of life – hopeful and adventurous yet also potentially dire.5

Boats at Williamstown is a signifier of enjoyment and escape and possibly the romantic life of the non-conforming artist. Held by the artist and then Barbara Blackman until its sale forty years on, this intriguing and highly inventive painting is a fine example of Charles Blackman’s response to the natural and manmade world allied to a unique and magical world view.