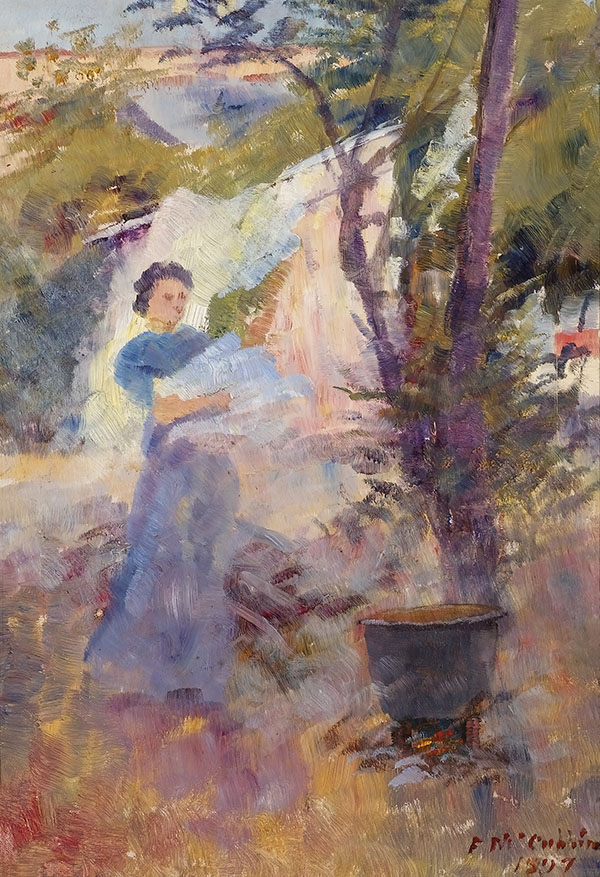 By 1896, Frederick and Annie McCubbin and their growing family had moved to New Street, Brighton, a place popular with many artists at that time. Their neighbours included John Mather (1848-1916), John Longstaff (1862-1941), Tudor St George Tucker (1862-1906) and Alexander Colquhoun (1862-1941). For McCubbin, it was close enough to the city for him to travel to his teaching job at the National Gallery School, and, with its many orchards and gardens, offered something of a rural setting. Nearby was the beach with its countless subjects for fine works of art; an excellent example, Brighton Beach 1896 being in the collection of the Mildura Arts Centre.

McCubbin's technique was progressing from the tight, tonal painting, learnt under the tutelage of George Frederick Folingsby (1828-1891), through the realism of Jules Bastien-Lepage (1848-1884), to a broader style in which the use of the square brush was put to good effect, as seen in this painting. The grey, foreground copper for boiling the water for the clothes, speaks of Folingsby's tonal definitions, whereas the remainder of the painting is sketched in with a breezy spontaneity, which captures so well the atmosphere ideal for a good washing day. The McCubbin children now numbered four - Louis, Alexander, Hugh, and Sydney - so washing day would have been of some importance in the weekly round faced by Mrs McCubbin.

The McCubbins lived in a weatherboard house with an adjoining orchard, wife Anne being the model for many of these Brighton paintings. They ranged from important pioneer subjects such as On the Wallaby Track 1896 in the Art Gallery of New South Wales, to typical genre subjects, of moments of everyday life, so typical of Impressionist art. Among these latter works are three charming seasonally based paintings - Spring 1896, Autumn Memories 1899 in the Joseph Brown collection, National Gallery of Victoria - both with ‘Mrs Mac’ in the Brighton orchard - and A Winter Evening 1897 - also in the National Gallery of Victoria. McCubbin returned to the subject of the washing day some years later in the oil painting, A Fine Day and a Good Breeze 1907, at one time in a private collection in Hobart. The title could apply equally to the present work.