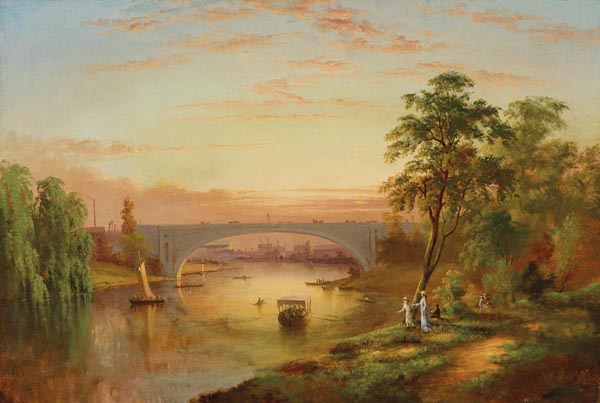 By Catherine Baxendale B Phil Hons in Blog
Lot:
View of the Yarra with Prince's Bridge, Melbourne

Scottish-born painter James Howe Carse arrived in Melbourne during the late 1860s at an extraordinary time in Victoria’s colonial history. Over the past two decades, the Gold Rush had dramatically transformed Melbourne from a fledgling colonial outpost to one of the most dynamic and prosperous cities of the British Empire, its population having swelled from a mere 77,000 in 1851 to some 500,000 in 1860.1

Carse swiftly established his reputation as a leading figure in the nascent colonial art world, alongside Eugene von Guérard (1811-1901), Henry Gritten (1818-1873) and Louis Buvelot (1814-1888). An article in Melbourne’s Argus from 1869 drew attention to ‘a very creditable landscape by Carse,’ and observed that ‘The increasing activity which is being displayed of late in our colonial-art world is one of the most pleasing signs of the times.’2 Carse became a founding member of the Victorian Academy of Arts and the New South Wales Academy of Art, where he earned a certificate of merit at the inaugural exhibition in 1872. Following Carse’s participation in the 1876 Intercolonial Exhibition, the Sydney Morning Herald declared him ‘perhaps the best painter in the colony.’3

In light of this, it is worth examining why Carse is far less well known today than his contemporaries. Unfortunately, slapdash cataloguing seems to have played a part: in exhibition listings of the period, Carse’s name was frequently misspelled as Cars or Carr, presenting certain challenges to the modern day historian. Moreover, Carse died in relative obscurity, having reputedly fallen into alcoholism in old age. Nevertheless, there are signs that a reappraisal of Carse’s legacy may be imminent: in 2015, the Art Gallery of New South Wales acquired Creek Scene, Tilba Tilba 1875, one of several landscapes Carse conceived on the South Coast of New South Wales.

The present work reveals a picturesque scene of Melbourne’s Yarra River at dusk, viewed from what is now Birrarung Marr, on the river’s north-eastern edge. The composition is one of exquisite intricacy and finesse: the bridge has been rendered with great attention to architectural detail, without compromising the overall lyricism of the scene. On the riverbank, young ladies frolic in a lush parkland setting, evoking the fêtes galantes of Antoine Watteau (1684-1721) and other landscapists of the Rococo period. Meanwhile, the subtle colouration of sky and water suggests the influence of JMW Turner, whose works Carse would surely have encountered in London during the early 1860s.

The bridge depicted in this painting is a previous incarnation of the current day Princes Bridge, built between 1845 and 1850 to the design of David Lennox. A fellow Scot, Lennox gave his name to the earliest remaining stone-arch bridge in mainland Australia, completed in 1833 in Blaxland, New South Wales. Characterised by its elegant, single-arch design, the former Prince’s Bridge was constructed from bluestone, a quintessentially Victorian material renowned for its heft and longevity. Visitors to the city in 1853 remarked, ‘There is one public structure in Melbourne deserving of notice, and that is Prince’s Bridge. This bridge is thrown over the river about 500 yards above the dam, and is a great ornament to the city […] The span of its single arch is but a few feet less than the centre arch of London Bridge, and the balustrade is very handsome.’4 Sadly, Melbourne’s continual expansion demanded the construction of a larger bridge in its place, and in October 1888 the ‘new’ Princes Bridge was opened to great fanfare.