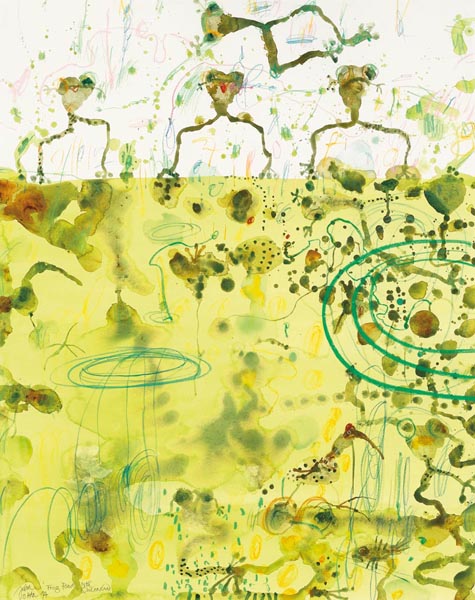 During the 1970s, John Olsen’s work was greatly influenced by the journeys he made into the Australian interior, previously unexplored by the artist. He travelled with the film-makers Ken Duncan and Robert Raymond, scientist Dr Douglas Dorward and naturalist Vince Serventy. During his travels, Olsen discovered the immense diversity of the country – in its rainforests, wetlands, estuaries and lily ponds. Contrary to popular taste at the time which favoured the refined European aesthetic of rose gardens and trimmed hedges, Olsen’s appreciation of native Australian flora and fauna was awakened after his exposure to the unique beauty of his local environment; ‘we have to die a little from our European heritage in order to live again’.1 The artist’s travelling companions opened Olsen’s eyes to the diversity of the ecosystems in different parts of Australia; he was stimulated not only by the individual species but the sense of the ‘whole, pulsating mass of living creatures’.2 This phase of his work saw a heightened concentration of skills in depicting bird and animal species which revealed the artist’s keen sense of perception together with an often imaginative, humorous response.

Perhaps more than any other Western artist, Olsen has studied the frog in great detail, producing art dedicated to this animal in a broad range of media. The artist became closely acquainted with these fascinating creatures whilst travelling and documenting Australian wetlands during the 1970s: he would fill sketchbooks with studies of frogs’ anatomy. Olsen continued to research their form in his Lake Eyre works during the late 1970s and in North Queensland in the 1980s - he was entranced by their vital energy and ‘the crazy articulation of their limbs, which corresponds with a sense of mental dislocation.’3

Throughout his career, the artist has returned to the life-affirming possibilities present within nature - the present work, Frog Pond, North Queensland from 1994 demonstrates Olsen’s enduring fascination with these tiny creatures and the complex, fragile world they inhabit. Despite the subject being thoroughly investigated, no two of Olsen’s frogs are the same. Here, the artist has depicted the underwater lily pond which teems with vitality and highlights the delicate life systems which flourish underwater. Above the surface, the playful amphibians leap through the air displaying their sleek, streamlined form. The pale green wash used by Olsen evokes the waterholes and ponds of his travels, highlighted with pastel to give the composition energy and movement. Frog Pond, North Queensland captures the vitality of these complex biomes with a lightness of touch which is uniquely Olsen.

John Olsen’s frogs are undoubtedly some of his most collectable subjects whether on paper, canvas or in bronze. They have endured as a favourite motif in his works across all media and are sought after by collectors both in Australia and overseas. Frog Pond, North Queensland displays the colour, energy and life which is inherent in the best of John Olsen’s work.

1. The artist, quoted in McCullough, B., Each Man’s Wilderness: Reflections by Australian Artists, Rigby, Adelaide, 1980, p.68