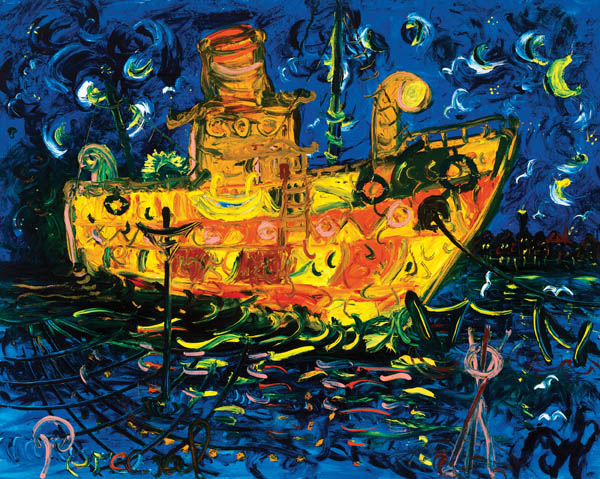 A painter of sporadic genius, John Perceval’s life swung from the occasional low point, mainly characterised by inactivity, to the greatest heights. His work invites comparison with that of his friend and brother-in-law Arthur Boyd. Both artists started their careers in the late 1930s and after Boyd’s death in 1999, Perceval survived him by a year. Both painters created blocks of work which can be viewed as entities: series of religious subjects, particular landscapes, and both painters also rested their brushes and turned for a period to other media. They also saw fit to return to subjects from earlier in their career where they may have had unfinished business. Boyd was unable to give up his interest in the Wimmera for example, and Shoalhaven is a byword for his persistence with a motif.

Williamstown is the place Perceval made his own. He first found his way there after his acquisition of a car in 1955. It was and remains a place with a strong local identity. Located at the mouth of the Yarra River, it is a maritime community not far from central Melbourne with a few shipyards, docks, piers and a rocky shore. The first of the Williamstown landscapes were exhibited at the inaugural exhibition held at the newly opened Australian Galleries in 1956. Perceval had produced, in a remarkable feat of sustained bravura painting a great monument of Modern Australian art. Many of the paintings from this first and the subsequent series, exhibited in 1959 have now found their way into the most important collections of Australian art. In the mid to late 1960s, following a period in London and then Canberra, Perceval returned to Williamstown, before declining health resulted in his retirement. After an interval, and with the encouragement of a few supporters, however, Perceval regained his eminent place in Australian art with a decade of intense painting activity. This last period, which effectively spans the 1980s featured a return to the subject with which he was most frequently associated, Williamstown.

As with Boyd, the later paintings gave Perceval the opportunity to reengage with a familiar subject in the light of changes, both personal and in relation to new artistic influences. Perceval had always demonstrated an interest in the work of Dutch and Flemish artists such as Breughel (1525-1569) and Rembrandt (1606-1669), but with this new series he proclaimed his admiration for van Gogh (1853-1890). Perceval may also have identified with the debilitating illnesses that van Gogh suffered, but it is the Wheat fields and Sunflowers, as well as the use of thick impasto and strong colour that confirm his debt to the great Dutch painter. It is this enhanced van Gogh factor that sets these later Williamstowns apart. Perceval relished the contrasting textures and colours of the port. Always characterised by a fresh and breezy atmosphere, it is fair to say that this subject always brought out the best in Perceval.