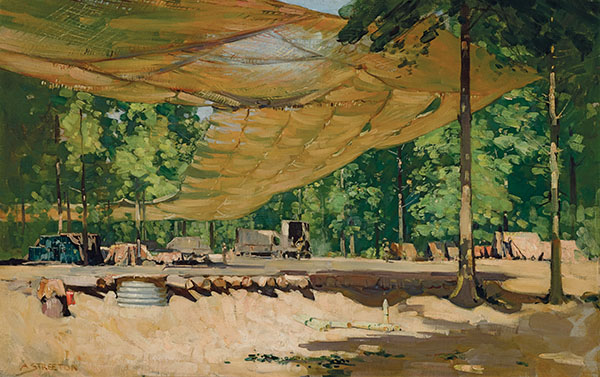 On 14 May 1918, Arthur Streeton arrived in France as an official war artist of the Commonwealth, having previously aided the Allied war effort from London as a member of the Royal Army Medical Corps.  After preliminary training in Boulogne, Streeton was assigned to the 2nd Division of the Australian Imperial Force (AIF) based at Saint-Gratien in the Somme Valley of northern France.  Somewhat improbably, the division was headquartered in the Chateau Saint-Gratien, a stately eighteenth-century home set within picturesque grounds.  Though situated only a few miles from the front, Streeton was struck by the apparent gentility of the scene, observing that in the ‘delightful old garden … the sense of comfort comes almost as a shock – the turn of guns & machines goes on all around.’1  The artist found his fellow troops in good spirits, buoyed by the successful night-time recapture of Villers-Bretonneux in April 1918.2  In contrast to the trench-bound stalemate of two years earlier, the conflict’s atmosphere had become increasingly volatile, with large swathes of territory changing hands from one week to the next.  The task of depicting this sprawling and ever-changing subject would present Streeton with a formidable artistic challenge.

Streeton was keenly aware that this was a different kind of war, which would demand new and unorthodox modes of representation.3 In a letter to his friend and patron Baldwin Spencer, Streeton alluded to the pictorial challenges posed by modern warfare:

True pictures of Battlefields are very quiet looking things.  There’s nothing much to be seen – everybody & thing is hidden & camouflaged – it is only in the illustrated papers one gets a real idea of Battle as it occurs in the mind of the man [who has] never been there.4

World War I had served as a potent catalyst for technological innovation, providing its combatants with a new and deadly array of weapons.  Tanks, machine guns, aircraft and mustard gas would inflict devastation on an unprecedented scale.  Streeton recorded many of these tools of war individually in watercolour, capturing their intricate machinery with remarkable clarity.5

In The Ballarat Dump, St Gratien Streeton shows much of this weaponry in situ, concealed from enemy surveillance in the woods of the Somme Valley.  The July 1918 date of the watercolour that formed the basis of this painting – sold at auction in August 2012 – suggests Streeton first conceived of this image in the forests of Glisy, where the artist camped in a dugout after leaving the Chateau Saint-Gratien in June 1918.6  Revealing a vivid patchwork of dappled light and shade, this could almost be a scene in the Luxembourg Gardens were it not for the lethal objects concealed within: among several camouflaged boxes of ammunition are cannisters of poison gas, denoted by patches of Prussian blue in the left of the composition.  As a reviewer for Adelaide’s Register wrote of The Ballarat Dump, St Gratien when the painting was exhibited in 1921, ‘The sinister menace of war pervades the quasi-peaceful scene.’7

Streeton’s wartime paintings also reveal his aptitude for design: his ability to sift through, refine and rearrange forms within space to achieve a clear and compelling image.8  The Ballarat Dump, St Gratien is a classic example, with its striking use of diagonal perspective.  Most unusually, the viewer approaches the composition from the upper left, where the hessian netting broadly zig-zags its way through the forest.  As with Streeton’s other wartime oil paintings, the present work was completed in the artist’s London studio from watercolours and sketches created in the field.  A second study for The Ballarat Dump, St Gratien – held by the Australian War Memorial – shows a closer perspective of the road and ‘dump’, with loose artillery shells scattered precariously in the foreground.9

Streeton’s paintings of World War I have deservedly been the subject of renewed attention in recent years, culminating in the major exhibition Arthur Streeton: The Art of War at the National Gallery of Australia in 2018.  As illustrated by The Ballarat Dump, St Gratien, Streeton approached this most cumbersome of subjects with flair, sensitivity and courage.