27. CHARLES CONDER The Verandah: Baroness A. de Meyer and Friends 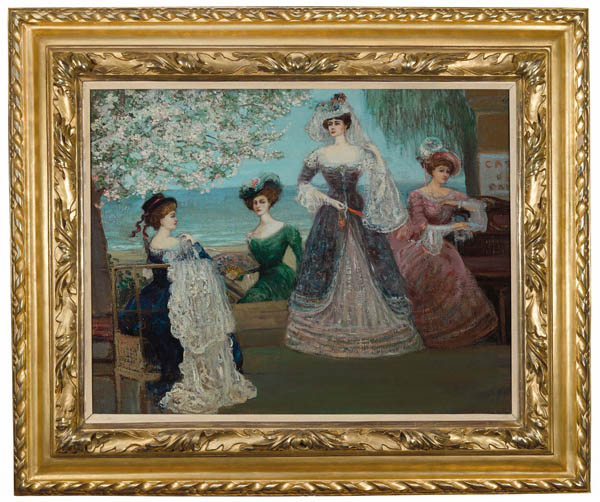 27. CHARLES CONDER The Verandah: Baroness A. de Meyer and Friends

By in Blog
Lot:
The Verandah: Baroness A. de Meyer and Friends

Conder captures a moment in time by the coast, perhaps Dieppe, with the subtle transition of colour from the distant sky and sea to the elaborate elegant costumes worn by the leisured Edwardian women. All faces are the same. Likenesses would detract from the moment, the freshness of the sea air, the newcomer in transition from a promenade below, about to join the group. All is dream-like and beautiful to behold. It is not difficult to be refreshed by this picture each time it is seen.

The Baroness de Meyer was a friend of Conder. They met in Dieppe when Jacques Émile Blanche invited him to join his family at their holiday retreat. Their neighbour was the Duchess of Caracciolo and her daughter, Olga, after whom the house was named- the Villa Olga. Later, Olga became the Baroness de Meyer when her godfather, King Edward VII, arranged an introduction and a new life for her in London. Her salons were both famous and infamous. Conder and Blanche were intermittent attendees.