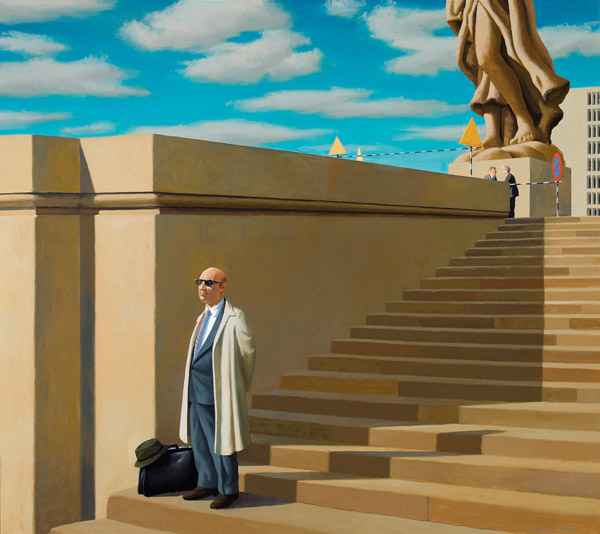 By Ken Wach in Blog
Lot:
Outside the Ministry

Jeffrey Smart’s major painting Outside the Ministry of 1970 is a harmony of parts. The painting pulses with what might justifiably be called “visual alliteration”. That is, it has a range of “optical melodies” that run through and serve to both form and inform the built-up composition and content of the painting.

The painting, originally exhibited in the famous Leicester Galleries in London in 1970, is the most notable of his works that use carefully controlled sequences of similar pictorial elements to create optimal visual interest. However, in this painting there is much more than simple interest. Its optical calm seems to exude a sense of underlying intrigue. These two characteristic attributes – visual harmony and mystery – are the hallmarks of some of Smart’s best and most aesthetically charged paintings.

These two attributes lend this rare painting the ambience of a pregnant pause – when a cityscape seems to hold its breath. Smart’s Outside the Ministry, created when he was forty-nine years of age, depicts an urban scene that seems captured as though it was first casually caught by eye in a moment and then laboriously conveyed by brush over many months. As a result, this conceptually elegant painting glows with lucidity, as if it was painted on the finest Sevres or Ginori porcelain - and no broad-brush work, expressionistic flourish or dark cloud is allowed to distract from the scene’s clear and sun-drenched disposition.

Furthermore, it is worth noting that the painting predominantly shows a flight of outdoor steps, a raised piazza retaining wall, a public statue and part of a large office block. These pictorial elements are arranged in a “visual alliteration” that “riffs” off the shape of the Golden Rectangle proportions (1:1.6) of a section of the wall that covers the area from the wall’s first indent to the vertical edge of the shadow line of the steps; so much so that the whole painting may be seen as a harmonised echoing of its rectilinear planes.

Unusually, there are no street scenes and no Italian autostrade in the present work. This observation points to the example set by the paintings of one of Smart’s most respected, and therefore most subtly emulated, artists: Giorgio de Chirico (1888-1978). Sophia Loren is his greatest collector and Smart was probably his greatest admirer – as he cheerfully admits and as may be seen in many of his earlier paintings in the late Fifties. De Chirico generally viewed scenes from the perspective of a train window – Smart generally, as in the present painting, saw them from the perspective of a car window. Each of them were masters of painting enigmatic scenes of the type of long-shadowed forlornness that haunts cityscapes – especially those that are almost empty, seen at dusk, overhung with billboards or set beneath a sliver of distant or brooding sky. The great Apollinaire (1880-1918), the Australian Robert Hughes (1938-2012) and the American Sylvia Plath (1932-1963) each saw deeply moving poeticism in de Chirico’s imagery – perhaps because it was all expertly cast in a historicised mould of Camus-like alienation; an Existential loneliness or Post-War dislocation.

Whatever the case, Smart with the lingering attention that he gave to selected scenes together with his technical finesse and carefully arranged visual stagecraft, invites his viewers to visit an unscripted theatre of city life. Once, long ago in Roman or even late-Victorian times, a scene of outdoor steps leading to a plaza, such as those found in the present work, would be garlanded with flowers, vines would drape the walls and urns would spill with flowering plants. In the wonderful Italian Baroque pictorial, action was always interrupted in time; there was a “story” and something was happening and that something was stopped for our benefit – Ariadne was just about to spin a thread; Daphne was just about to change into a tree; a martyr was just about to receive the Crown of Heaven – those images all had delightful “stop-action” attraction. By contrast, in Smart’s Outside the Ministry there is no “story” and no action to interrupt; everything is frozen in time – an anonymous man, who is made all the more anonymous by wearing sunglasses, stands in an empty stairwell doing we know not what, while above him two suited males are seemingly engaged in a conversation – the image has an inscrutable “preserved” immobility. It is as though the viewer is presented with, and left to ponder upon, just one frame randomly clipped from the reel of an unknown movie. A head-turning and alienating “Hitchcockian” suspense or a David Lynch-like mystery pervades the present canvas.

In his life, work and words, there is much to suggest that Smart saw all these alienating factors as the melancholic malaise of our times. He often called it “savagery” – an uncivilised deficit that emptied lives of an engagement with living. A denatured aura of inanimate oddness surrounds all – we all recognise it in the present work because we have all felt it. With all this in mind, Smart’s Outside the Ministry acts as both a symptom and symbol of our Age – this alone makes it an outstanding “finger-on-the-pulse” painting.

Smart started thinking along these more intellectual lines as early as 1941 in Adelaide, the city of his birth. His explanation for this turn of content in his works is wryly informative, ‘My attraction to urban life, factories, trucks and vacant city lots came in my early 20s when I decided I’d painted my last billabong scene forever’.1

What he subsequently and slowly developed was an “at a remove” visual distancing that depicted certain aspects of cityscapes and of clashing juxtapositions, water towers, silos, bus-stops, petrol stations, truck bays and high-rise apartments that seemed to give voice to the caught-in-concrete bittersweet human complexities of urban life. However, Smart was never “cruel” in his depictions but from the balcony of his Tuscan villa and its surrounding garden distant city life looked unappealingly askew.

Smart’s paintings are so acutely presented as glimpses of views or snatches of overlooked aspects of everyday scenes that nowadays viewers commonly speak of a “Smart” cityscape, just as readily as they speak of an “Arthur Streeton” vista or a “Fred Williams” forest of saplings. Each of these artists aestheticised ubiquitous snatches of seemingly unremarkable reality to iconic effect; however, in Smart’s paintings, as in the present work, there’s always an engaging perplexity. Expressed in a nutshell sense, Smart’s ultimate aim is deceptively simple: to paint the world around him through the world within him; that is, to see it through the screen of his own intellect.

This range of exhibitions, retrospectives and publications gave the Australian public an opportunity to scrutinise and reassess artistic prominence. Needless to say, their resounding successes reaffirmed Smart’s artistic standing in Australia’s public and private collections as well as cementing him permanently into the nation’s cultural history.

Jeffrey Smart’s especially noteworthy Outside the Ministry is a highly accomplished and impressive painting possessing a filmic visual intensity that highlights its acutely observed psychosocial implications. The painting is an aesthetic tour de force that embodies a carefully considered compositional structure that is created with gravitas and social resonance through the distanced gaze of an empathetic observer.