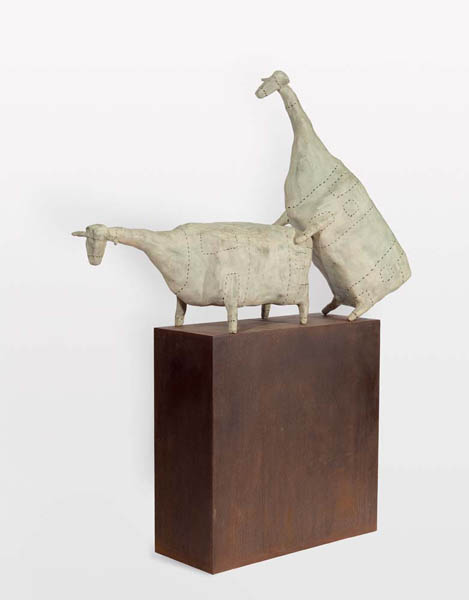 John Kelly’s work has for many years been involved with finding comedic value in chapters of Australian history. He literally takes apart and re-examines the mythology surrounding iconic Australian symbols; particularly the Dobell cows, the racehorse Phar Lap, and the Australia Council’s ‘kangaroo and sun’ logo. The cow has become a familiar motif within Kelly’s body of work however they are more than just renderings of surreal beasts - they represent moments from Australian history.

The cow theme in Kelly’s work stems from his enduring interest in artist William Dobell’s (1899-1970) military experience and his role in the war effort. During World War II, the Camouflage Section of the Australian Defence Force employed many Australian artists including Ivor Francis (1906-1993) Arthur Boyd
(1920-1999) and William Dobell (1899-1970). The task which Dobell had been given during this time was quite unlike most of his contemporaries – his artistic skills were put to good use when the young Dobell was employed in making life-size painted papier-mâché cows which were placed around field airports in the hope of hoodwinking Japanese pilots that were looking for Australian airbases. This bizarre bit of Australian history became the focus of the cow series of works – the absurdity of the camouflage scheme fascinated Kelly and now forms the foundation of what has become a significant part of his ouevre to date.

The idea of cows up a tree first came to John Kelly while on a trip to Barcelona in 1995 – the artist imagined what would happen during a flood on Dobell’s airfield. Images of papier-mâché cows floating away and being stuck in the trees manifested in
Kelly’s sketchbook and this was the foundation for the ‘Cow up a Tree’ works.

‘This scenario has been the inspiration for my work for a number of years: my intention is to create work that encapsulates the concepts and ideas that intrigue me. I take historical subjects such as Dobell’s cows… and my own personal experience to build a framework within which I can create my own vision of things. Within this I pursue a multi-layered research of concepts and ideas both visual and intellectual. Sometimes I use imagery that portrays a dumbness to camouflage a more sophisticated intent. Through this I generate visual ideas and concepts in paintings and sculptures that create their own history by engaging in the real world as works of art… I like to create works that reach beyond their absurdity to reflect something of my visual and intellectual environment. This is my intent.’1

Kelly has enjoyed much critical and commercial success with his cow works both in Australia and internationally. The artist’s large-scale cow sculptures have been exhibited widely in Australia and overseas: the Champs Elysées, Paris, in Les Champs de la Sculpture (1999); Monte Carlo, in La Parade des Animaux (2002); the MAMAC, Nice; The Hague (2007); Glastonbury, United Kingdom (2006 and 2007) and Cork city, Ireland (2011). His work is represented in major public art institutions in Australia and overseas and is sought after by many private collectors on the primary and secondary art market.