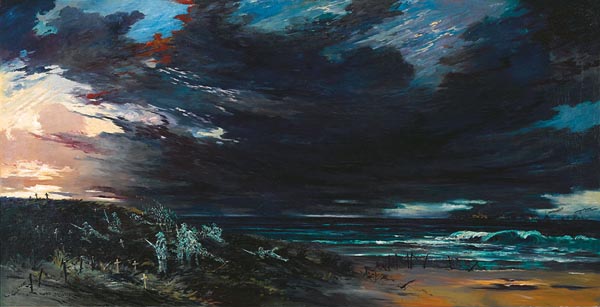 By Rodney James, B.A. (Hons.), M.A in Blog
Lot:
The Rearguard (The Spirit of the ANZAC)

In The Great War and Modern Memory cultural historian Paul Fussell studied the literary responses by English participants to trench warfare in the Great War. He relates how writers grappled with the presence of horrific injuries, brutal carnage and unprecedented death by looking for new ways to express their feelings and states of mind. The events they were witnessing were too far outside lived experience and belied comprehension.1 While this classic text has since been criticised in some twentieth circles for being overly selective in its choice of writers, the central premise that war in the  century tested our ability to find meaningful responses is something that still holds true.

Rearguard (The Spirit of the ANZAC), 1927, represents Will Longstaff’s poignant and quasi-spiritualist response to the horrors of World War One and Australia’s involvement. This monumentally scaled work was produced not long after he attended the Menin Gate Memorial in Ypres, France, on 24 July 1927 and forms part of a group of six canvases that have since become permanently etched in our collective imagination. This includes the much loved Menin Gate at Midnight (also known as Ghosts of Menin Gate), 1927, purchased for an unprecedented amount of 2000 guineas in 1928, immediately presented to the Australian government, and now on semi-permanent display at the Australian War Memorial, Canberra.

Contemporary newspaper accounts and interviews relate how the idea for this painting came to Longstaff as he walked along the Menin Road at midnight. So moved was he by the ceremony, Longstaff envisioned a rank of steel-helmeted spirits arising from the adjacent moonlit cornfields. Following his return to London he painted Menin Gate and not long after that The Rearguard (The Spirit of the ANZAC). Both works were painted quickly, reputedly each in a single session, as if the artist was entranced by the same level of psychic energy as his subjects.2

The Rearguard (The Spirit of the ANZAC) symbolises the spirit of Australian soldiers in Turkey; facing the enemy while simultaneously presiding over graves and beckoning towards warships on the horizon. The ships are depicted hull down and the symbolism of the scene is enhanced by the ghostly procession of the dead on windswept grass knolls on a bleak and misty morning.

Critics recognised the poignancy of the image for Australians when it was first exhibited in London at Australia House Library in March 1928; however, with its tour to Melbourne and Sydney the following year, it struck an even more responsive chord. Local audiences now saw it as a representation of our coming of age as a nation and the tragic valour displayed by our soldiers in battle. It is only then that the work gained the second part of its title.

One widely circulated account captured the pathos of the scene and its links with an emerging national pride perfectly: ‘LONDON, Wednesday. After 10 years' efforts to recapture on canvas the spirit of Gallipoli at the evacuation, Will Longstaff has completed a 9-foot picture entitled "The Rearguard", in which all the desolation, pathos and disappointment in the Dardanelles campaign is reflected. The picture shows faint streaks of a bleak dawn over Cape Helles, while rows of ghostly figures, fading as the light increases, mount guard over graves, at the same time beckoning towards the transports' hulls, low down on the horizon.’3

The linking of personal bravery and self-sacrifice was a powerful theme of WWI. It was one way that people grappled with the enormity of the conflict and the loss of their loved ones. Will Longstaff had enlisted in the Australian Imperial Force at the outbreak of war, he was wounded at Gallipoli and subsequently served as an official war artist. The war galvanised Australians by bringing them closer together. While his cousin and fellow artist Sir John Longstaff personalised his grief by painting a shadowy posthumous portrait of his son killed in action in 1916, Will Longstaff was driven to create a monumentally scaled, visionary work that conveyed a more universal sense of war and loss as a watershed in Australian history.