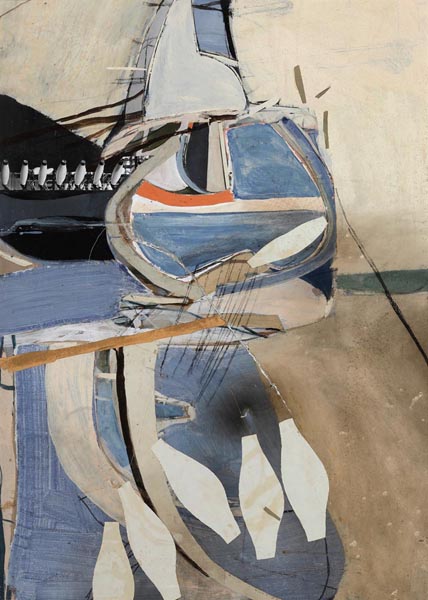 As an art student Brett Whiteley was filled with the restless urge to absorb as much as he could from the artists who had come before him. Early influences included William Dobell (1899-1970) and, in particular, Lloyd Rees (1895-1988), a fellow resident of the comfortable harbourside suburb of Longueville. Whiteley had enrolled at the Julian Ashton School in the Rocks after his precocious talents began to show in secondary school, spent first as a boarder at the Scots School in Bathurst and then at Scots College in Bellevue Hill, Sydney. Not content to just work in the studio, with fellow artist Michael Johnson (born 1938) he retraced the steps of his artistic heroes around Sydney, reworking their subjects and getting a feel for the landscape. His drawing was vigorous and his compositions well organised - he could have made a fine career in the mainstream of conventional landscape painting had he wished. But his energy and enquiring mind constantly sought new experiences and it was a conversation with artist and jazz musician John Howley, then playing at the Royal George Hotel, the epicentre of Sydney’s artistic and musical firmament, that sent him in a new direction. Howley had suggested that Whiteley should investigate the work of the Armenian-American painter Arshile Gorky (1904-1948), who had died a decade before. Whiteley was immediately inspired by Gorky’s loose compositions, with their tantalising mix of spidery line and amorphous abstract shapes.

Whiteley’s win of an Italian Government Travelling Scholarship, judged by Russell Drysdale (1912-1981), took him to Rome and then to London where he could build his career at an international level. He was energised by the bold still life abstractions of William Scott (1913-1989), the English modernist whose thoughtful compositions made a telling counterpoint to the fluid energy of Gorky. Whiteley was successful at selling his work in London and was pleased to receive a commission to make a group of works for the owner of a spinning mill in Wales. This present c1961 abstract work is relatively small by Whiteley standards, at just 73.0 x 52.0 cm, but is full of the restless energy and inventiveness that marks all of his best work.

The Gorky influence is quite discernible in the ‘spinning’ collage, but Whiteley has also grounded the work with a number of clever interventions. The collage consists of sections of painted paper, cut out and placed on the background. Images of spinning machinery contrast in detail and complexity with the painted elements. While strongly abstracted, the work can also be quite clearly read as a landscape, using the composition Whiteley would employ in his large vertical paintings completed in the late 1970s at Carcoar in New South Wales. Instead of the flowing river, his blue painted elements read as a typical British industrial canal, the waterways alongside which textile mills were invariably placed.  White cut-out shapes echo the spindles, but can also be read as boats on the canal supplying the mills. The present work can also be seen as a precursor to his classic Sydney landscapes, devoid of a horizon and viewed from a high vantage point, as in his classic depictions of Lavender Bay.

The ‘spinning mill’ works found a peripheral, but not insignificant moment in the world of British art and design. An article on the pictures was published in The Ambassador, a journal promoting British textiles and fashion. This was not some humble leaflet dropped around the mill towns, but a high-end publication described by the Victoria and Albert Museum as 'probably the most daring and enterprising trade magazine ever conceived'. With the motto 'Export or Die!', the magazine was renowned for its innovative design and adventurous editorial approach in promoting British manufacturing in the post-war period’.1 It was in the hothouse world of style-conscious 1960s London that Whiteley really found his feet as an artist, segueing from his elegant Scott and Gorky inspired abstractions to the gritty and erotically charged Christie series. That highly emotional rendering of sex and death marked the moment when Whiteley moved from inspired young artist to a powerful and mature figure at the forefront of Australian and international art.