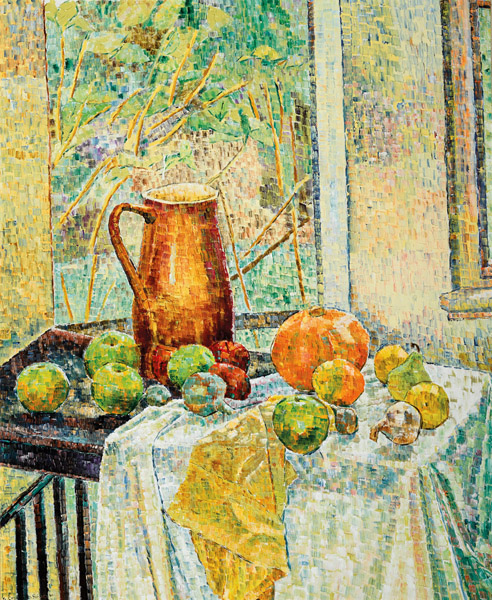 By Catherine Baxendale B Phil Hons in Blog

Grace Cossington Smith’s radiant still lifes and interiors of the 1950s and 60s are broadly considered to mark the culmination of her career. Animating the entire surface of her paintings with ‘confident, square touches of pure colour,’1 Cossington Smith fulfilled her long-held ambition to paint ‘colour within colour, vibrant with light.’2Jug with Fruit in the Window 1960 is a consummate example of Cossington Smith’s approach to still life, combining a characteristically lively palette with an underlying rigour of composition and form.

The second half of Cossington Smith’s career provides a compelling example of how an artist’s work may be profoundly shaped by their personal circumstances. Since 1914, the artist had lived more or less continuously at ‘Cossington’ – the family home in Turramurra on Sydney’s upper North Shore. The artist’s father, Ernest Smith, constructed a small studio in the garden, which was to serve as her main place of work for the next twenty-five years. Following Ernest’s death in 1938, an area of bushland adjacent to the garden was sold, and Cossington Smith consequently ‘abandoned her garden studio.’3 Migrating indoors, the artist had the south-eastern corner of the house extended to accommodate a spacious new studio, with views of the leafy back garden.4 A few years later, Cossington Smith became a devoted carer to her sister Diddy, who had fallen ill in the years leading up to her death in 1962.5 Owing to this change in circumstances, Cossington Smith’s art became increasingly focused upon domestic subjects – chiefly still lifes and bedroom interiors. As the artist recalled of her final years with Diddy, ‘We were both content and happy in our life at home. I found quite enough to paint.’6 Somewhat ironically, this sedate domestic setting would provide the impetus for some of the artist’s most inventive works, revealing a fresh and unbridled approach to colour and light.

Jug with Fruit in the Window shimmers with tiny square brushstrokes of pure colour in a palette of terracotta, lime green, saffron yellow and lilac. Cossington Smith’s use of colour achieves its impact through variation and contrast: similar shades are clustered together and set against their direct opposites. This is seen to most dramatic effect in the section of wall on the top right, where pearlescent brushstrokes of yellow and cream are interspersed with touches of pale pink and indigo. Curator Deborah Hart writes that the artist’s embrace of vibrant, non-referential colour during the 1950s and 60s ‘reflects a sense of liberation in growing older, freed from the pressures of having to prove herself.’7 Cossington Smith’s other still lifes of this era demonstrate her willingness to experiment with different colour schemes, corresponding to changes in atmosphere and ‘mood’.8 Interior 1958 in the collection of the Queensland Art Gallery reveals a jewel-like palette of magenta, turquoise and gold; while the more serene Still Life with Jugs 1963 features brightly coloured ceramics and fruit amid contrasting red and blue drapery. Having closely studied the theories of Beatrice Irwin in the 1920s, Cossington Smith developed a highly intuitive approach to colour: ‘I see something and it makes me feel a colour’.9

Cossington Smith’s modernist approach to still life marked a significant departure from the vanitas or memento mori traditions in Western painting, with their sombre images of skulls and half-read books. By contrast, Cossington Smith’s domestic scenes are full of life, implying a certain fluidity between the interior and the natural world outside.10 In Jug with Fruit in the Window, the open angle of the table and central placement of the jug immediately direct the viewer’s gaze through the window, to the vibrant greenery of the garden. In the absence of conventional perspective, Cossington Smith has adjusted her distribution of colour to convey a softening and sharpening of focus. The principal subject of this painting is of course the jug; it serves an almost architectural purpose, providing an anchor for the composition and a rich, tonal base for the palette.11

Cossington Smith’s still lifes suggest various art-historical influences, but there are two main sources that are most apparent. The first of these is Paul Cézanne (1839-1906), whom Cossington Smith had venerated from her days as a student of Antonio Dattilo Rubbo (1870-1955) in Sydney before World War I.12 From Cézanne, Cossington Smith inherited an acute feeling for pictorial space and weight: the seemingly casual arrangement of objects in Jug with Fruit in the Window belies their careful orchestration. Delicately outlined in dark paint, Cossington Smith’s fruit appear to float improbably above the tabletop, with a near absence of shadow.13 The translucent white tablecloth is dramatically pulled back to reveal the dark surface of the table underneath; a visual device found in many of Cezanne’s still lifes of the 1890s.14 The warm, earthy colours and deliberate framing of Jug with Fruit in the Window are also reminiscent of the Italian quattrocento painters Piero della Francesca (c1415-1492) and Fra Angelico (c1395-1455), whose works Cossington Smith admired during a visit to Europe in 1949-50.15

At first glance, the vibrant Post-Impressionist flavour of Cossington Smith’s paintings of the 1950s and 60s would appear to be somewhat removed from concurrent developments in modern art. The mid-century palette – as typified by paintings, interiors and fashions of the era – tended towards the drab and tonal. Abstraction was fast becoming the default mode of contemporary art. Nevertheless, several scholars have observed abstract tendencies in Cossington Smith’s mature works, citing her renewed focus upon painterly surface and 'colour as form'.16 Ultimately, however, Cossington Smith never abandoned figuration entirely: the subjects of her paintings are always readily discernible. For this reason, Cossington Smith’s works of the 1950s and 60s convey a certain timelessness.

In 1960, when Cossington Smith painted Jug with Fruit in the Window, her reputation as one of the leading Australian artists of her generation was firmly established. Throughout the 1960s and early 70s, the artist continued to hold regular exhibitions with Sydney’s Macquarie Galleries, where she had shown her work since 1932.17 On the eve of her final decade, in 1973, Cossington Smith was honoured with a major retrospective at the Art Gallery of New South Wales. Jug with Fruit in the Window was one of the few privately held works to be included in a subsequent touring retrospective in 2005, curated by the National Gallery of Australia.