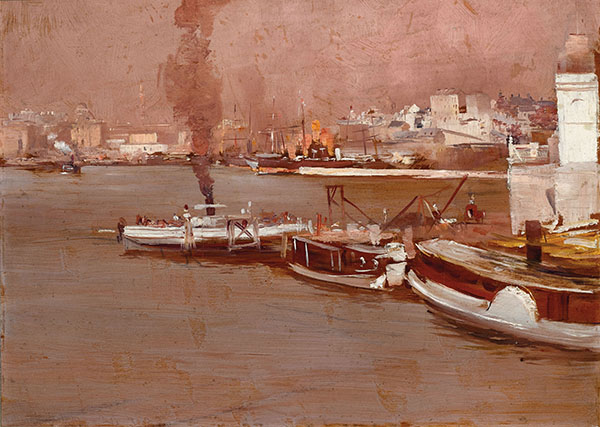 Before the construction of the Sydney Harbour Bridge, travellers wishing to make their way across the harbour were obliged to make a lengthy journey inland or else use a ferry. At Milson’s Point, directly across the water from Circular Quay, the ferry provided a regular service which could take passengers as well as horses on a regular half-hourly service. North Shore depicts the view from Milson’s Point south, towards the commercial heart of Sydney and Circular Quay.

The scene was painted by Roberts during a brief three-week stay in Sydney in the Autumn of 1888. It was during an earlier visit that Roberts encountered the young painter Charles Conder (1868-1909). Roberts, in his early thirties and Conder, barely nineteen years of age, hit it off straight away and when Roberts returned several weeks later, on 19 March 1888, they reconnected. Roberts lodged with Conder’s uncle and aunt and the two continued their friendship and embarked on an exchange of artistic ideas.  Together with Arthur Streeton (1867-1943), whom Roberts had recently met in Melbourne, Roberts and Conder were laying the foundations of what became the Heidelberg School, or Australian Impressionism.

On this trip, Roberts spent his time painting around Sydney Harbour. On 22 March he produced a small two-sided study of Manly, and two days later produced the present work, which he inscribed  ‘North Shore 24.3.88.’

Roberts at this time, and in comparison with the much younger Conder, was relatively mature as an artist and was able to draw on his formal education with Louis Buvelot (1814-1888) at the National Gallery School as well as his personal experience of the most recent developments in European art gained while visiting Spain, France and England in 1884. He studied the Old Masters, as well as the more recent developments by noted painters such as Whistler (1834-1903) and leading French artists including the Impressionists. In particular, Roberts returned from Europe excited about the then current fashion for painting en plein air, in order to make a more accurate record of the landscape and the spontaneous effects of weather and the time of day. North Shore duly depicts the smoky, windless, Autumn day with air pollution casting a coppery light over the scene.

North Shore became a study for the somewhat larger, more finished version, An Autumn Morning, Milson’s Point, Sydney. Now in the collection of the Art Gallery of New South Wales, this work was painted in the following days and exhibited in Melbourne a few weeks later where it was the subject of reviews in the Argus and the Age:

‘An Autumn Morning, Milson’s Point, Sydney’ is a new departure on the part of the artist and has a dash of originality about it. It portrays the smoke and mist rising from the city in the early morning, flushed with a rosy glow by the newly risen sun, which sheds its strong white light upon the pier and vessels in the foreground, while the surface of the harbour gives back a reflection of the blue sky overhead.1

The two paintings are very closely related, and yet North Shore shows the marks of its plein air pedigree with thinly applied oil and unpainted areas revealing the panel showing through employed by Roberts for the composition. North Shore contains a remarkable amount of detailed visual information as well as conveying at first hand and with extraordinary felicity the scene as it was on the day Roberts stood there.

The sense of immediacy is underpinned by a painting Roberts made seven days later. On Easter Sunday and Monday, April 1 and 2, Roberts and Conder went to Coogee where they stood side by side and recorded the same view of the beach from the northern side, facing south. As well as presenting us with a unique opportunity to enjoy the extraordinary levels of skill both artists could call upon, the two paintings offer a chance to compare different interpretations of the subject. Roberts’ Holiday Sketch at Coogee is a demonstration of clarity of observation of finely rendered effects of texture, light and visual information. In comparison Conder’s Coogee Bay is disposed to explore the narrative and decorative aspects of the subject.  Roberts work is quite different: dispassionate, almost dutiful and completely serious. In a similar way, his North Shore presents the subject as it is: gritty, businesslike, and purposeful. Conder’s rendering of Circular Quay, Departure of the Orient - Circular Quay focuses on the emotional.  Painted within a few days of North Shore, it is a display of virtuoso handling of paint, with the weather, a rainy day contributing to the sombre mood of a crowd assembled to farewell loved ones returning ‘home’.

By agreeing to work together, at times looking over each other’s shoulders, both artists were able to measure their progress as painters, to vie in a convivial, agreeable spirit of competition and to gain insights into their own work which in turn gave them the confidence to push further ahead. Roberts understood that in nurturing the relationship with Conder that both artists could accelerate their progress as artists. The excitement that Roberts felt about the possibilities for not only his own art can still be felt today as we read the reportage of the time:

…one memorable evening at a wine shop at Mosman, when … (Roberts) initiated his friend in the principles of impressionism. In those days the ferry called every half-hour, but Mr Roberts says the time flew so rapidly that they seemed to be arriving every ten minutes, the three hour’s talk appearing to have lasted half an hour.2

Throughout the process, Roberts reveals that what they were attempting could have a lasting effect, and he recognised that he and his friends were making a contribution to the way Australians see themselves. For Roberts, the landscape became a metaphor for Australia. In the absence of an actual history, Roberts, following the example set by the Impressionists, sought to represent his young country by depicting Modern Life and by rendering its unique landscape truthfully.

North Shore belongs to a small group of works produced by Roberts at a critical time in his career. At 32 years of age he was on the threshold of national prominence. A few weeks after painting North Shore he began work on his best known painting, Shearing the Rams, the masterpiece completed in 1890 which brought the ideas he had formulated over the previous years to their fullest resolution.3 North Shore was painted at a time when a small group of young artists, blessed with an abundance of natural skill and an adventurous spirit, came together and with the encouragement of Roberts, the group’s leading member, set about that task of consciously creating art specific to Australia.

North Shore was exhibited in Sydney in the year 1900 in an exhibition mounted by Roberts for the purpose of raising funds for his 1903 trip to England. At some point after this it went, either by purchase or as a gift, into the collection of Nancy Elmhurst Goode, a music teacher and good friend of the artist. Roberts’ 1900 portrait of Mme Goode is now in the collection of the National Gallery of Victoria.