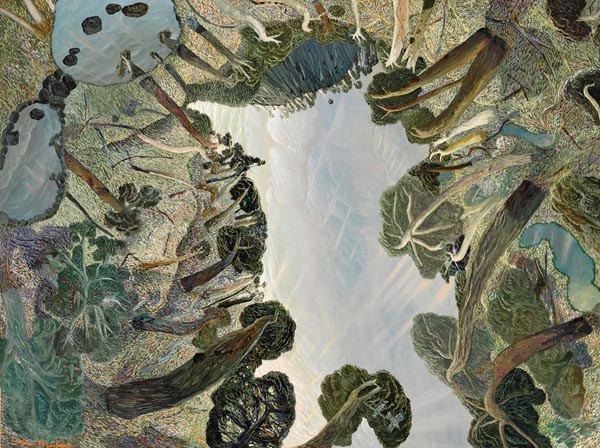 In the late 1980s and early 1990s William Robinson began to paint landscapes in a remarkable way. Liberating the observer from the constraints of both time and gravity, Robinson began charting journeys across the landscape he called home in Beechmont, Queensland. Using paint as his map, the artist placed the viewer inside the painting itself, as if traversing the landscape he were painting.1 Looking at a Robinson landscape painting can be vertiginous and destabilising: one must surrender to the logic of the painting and allow the eye to wander. There is no horizon line to orient oneself with, but the compensation for these unnerving sensations is a vibrant evocation of a walk through the bush, lovingly recreated. 'I want to move away from observing the picture as some sort of representation. I want to sweep the observer down the gullies and up into the sky. The observer is drawn into the landscape – not physically but as a sort of connection with memory. The painting reminds us of experiences we might have had when walking in the bush ...'2

Towards the Cliff, Beechmont 1991 is a beautiful example of this evolution in Robinson's artistic trajectory. It demonstrates an early detachment from conventional temporal and spatial representation as well as his superlative use of colour to describe light and form. We are looking up a valley towards a cliff covered with majestic gums. It appears to be dusk, but it could equally be very early morning – the sky is pale with wispy threads of cirrus and the eye is caught by two pools, gently reflecting the sinuous and towering trees above them. The artist has used small consistent brushstrokes, echoing footsteps taken, to record the bark on the trees and the movement of light in the air. Everything is captured in movement – the wind shifting the leaves in the canopy, the light fading (or growing) across the cliff face and the eagle taking flight from branch in the overstory. The two related works, Sunset and Misty Moon, Beechmont and Ridge and Gully in Afternoon Light were painted in the following years and deal more directly with the idea of including more than one time span in the one painting. Taken as a set, these three paintings depict the same stretch of landscape in all moods, at all times, in several seasons.

Robinson was the first non-indigenous Australian artist in a considerably long time to generate an entirely new way of seeing and representing the Australian landscape.3,4 Arguably what has made it possible for Robinson to follow his instincts and create such original paintings was the steadfast nature of his practice and relationship to the land he lived on. With a Kant-like devotion to daily walks, Robinson literally spent years walking and painting the Beechmont landscape. He does not paint en plein air, but rather the paintings arrive in his mind as an idea, rather than a vision.5 These early Beechmont landscape paintings are a natural stepping stone to the later, grander, Creation landscape series and the sombre Mountain series. Retrospectively we can see the beginnings of the artist's capacity to encompass the fullness of human experience within the one canvas, similar to the 'overview effect' described by astronauts seeing earth from space.

Interestingly, Towards the Cliff, Beechmont has only had one owner, Dr Joan Croll AO, noted mammographer, and one of the thirteen 'Battlers for Kelly's Bush'. Croll's portrait by John Brack is in the collection of the National Portrait Gallery, Canberra. The ‘Battlers for Kelly's Bush’ were notable for their lengthy campaign to preserve a tract of bushland on the Parramatta River from development. Their grassroots efforts were triumphant and Kelly's bush became the site of one of the first ever 'green bans' – an international landmark. There is a pleasing symmetry in considering that this painting of a well-loved piece of bushland by a well-known bush lover was appreciated daily by another well-known Australian bush lover.