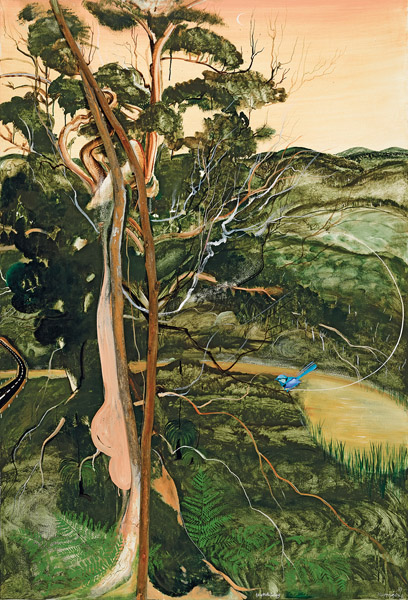 There are times when Brett Whiteley’s paintings are unusually lyrical. Certainly, Whiteley is one of Australia’s most lyrical artists, generally in the free use of his easy, languorous lines and particularly when they describe a curve, an arm, a thigh or a tree trunk. However, in paintings such as the present work Kurrajong of 1981 Whiteley’s linear lyricism is of a more rare and special type.

Firstly, the painting is of a vertical format, less common for Whiteley, which hints at its origins in Chinese art. Chinese painting is often executed on scrolls that are unwound and images are viewed screen-like as though they were unfurling stories. When, and if, they are hung in the Western way, they have an enviable unframed informality that is light, airy and complementary to modern interiors. There is no doubt that Whiteley noticed this and his acute visual perception would have responded to these attributes.

Secondly, the elements in Chinese paintings are often arranged asymmetrically and in a way that frames the scene in a non-centralised beautifully offset manner. The most common and impactful scenes in Chinese art are those showing a marvellously gnarled ancient cedar pine, a river, rocks, clouds and a large expanse of sky, usually topped by a dragon. Whiteley’s painting is not very far off this restful and compelling historical format. At first, Chinese painting seems oddly eccentric to a Western eye, given our acclimatisation to a centred perspectival Claude Lorrain (1600-1682) style format. Yet, in time and at easy moments, its off-centred askew appearance seems tailor-made to capture the unplanned and self-sown charm of the informal Australian landscape. Whiteley has brilliantly and very elegantly grasped this aesthetic connection.

Thirdly, in the present painting the viewer’s attention is drawn to the left-hand side of the work and its depiction of a very large weathered and lightning damaged gum tree. Its trunk and main branches are marked out with light streaks of thin pigment that allows for an easy fluid line, especially in the loose, almost calligraphic, forms of the many leafless branches. The background is formed with thinly applied and sponged paint in a variety of green shades, and a typically sullen coloured Australian river lazily winds through its lower middle section. A curved whiplash line that traces the flight path of a Blue Wren, collaged into the work and painted so that sits in the middle register of the painting, draws the eye back into the composition and lightens the painting’s reserved grandeur. Without this totally fitting addition, the painting’s background would seem to visually ‘run off’ to the right and make it look as though it has been cut from a larger painting. In Kurrajong, the Blue Wren perches for a split-second upon a branch, as if poised in flight. Whiteley has used photo-collage to capture this elusive creature, explaining in one of his notebooks: ‘I use collage, or more properly photography, sometimes in a painting when I feel the need to describe in the focus of the painting something that requires infinite realism, realism so absolute that no amount of painstaking brush strokes can accurately describe it’.1 Barry Pearce, former Curator of Australian Art at the Art Gallery of New South Wales, makes the supporting observation that Whiteley had always admired birds, painting them with ornithological precision: ‘Their presence, especially in his later works has been suggested as representing his own self-portrait and the flight-path of the bird, the soul-lines of his relaxed journey through his private domain’.2

Kurrajong, the subject of the present painting, is a medium-sized town about seventy-five kilometres north-west of Sydney. It is located near the Hawkesbury River in the region of the Blue Mountains. The town has an Australian charm that has not fallen prey to inappropriate development and ‘theme management’. Perhaps it was the easing charm of these things that attracted Whiteley to the town and also to other typically Australian semi-rural towns such as Oberon, Marulan, Carcoar and Bathurst.

In 1979, when talking to his earliest supportive writer Sandra McGrath, Brett Whiteley made the following revealing admission: ‘Sometimes, I have to paint pictures that have an effortless naturalness, not artificial or synthetic, not manufactured - pictures that have no affectation through mental tricks, but graceful and according to Nature’.3 It is obvious that Whiteley sought both solace and inspiration in Nature and, returning to his original sources must have seemed to provide him with welcome respite. In his exhibition catalogue entitled Brett Whiteley: Art and Life Barry Pearce too underlines this very aspect of Whiteley’s art and life:  ‘Of all the subjects Whiteley painted in his career, landscape gave him the greatest sense of release…If in many of his other themes Whiteley confronted the difficult questions of his psyche, landscape provided a means of escape, an unencumbered absorption into a painless, floating world’.4

Returning to Australia in 1969 after many turbulent years abroad, Whiteley embarked on an artistic journey, and like many Australians abroad came home to discover a fresh appreciation for his homeland. In a sense his return signalled a mature phase in his art. Like generations of artists before him, the beauty, vastness and variety of the Australian landscape proved fertile ground for inspiration. He turned first to the sparkling, seductive panorama of Sydney Harbour’s Lavender Bay and produced a body of work that is now celebrated for its sheer optical richness. From the sweeping, sweltering plains depicted in Summer at Carcoar 1977 to the verdant undulating hills of Kurrajong, Whiteley recorded the nuances of each location with a stillness and precision and infused each work with a sense of capturing a briefly glanced moment in time.

In his quest for verisimilitude, Whiteley applied tree branches to the painting’s support, a device he had used in such epic works as The American Dream 1969 and Alchemy 1972-73 to blur the definition between the picture plane and the viewer’s realm. This is something that often was done by great American artists such as Jasper Johns (born 1930) and Robert Rauschenberg (1925-2008) to introduce elements of reality as an incorporating aesthetic device. It was also done earlier by the famous Spanish/French artist Pablo Picasso (1881-1973), who after Cubism often parried with elements of external reality and real life objects not only to highlight his own creations, but also to see if they stood up to the visual impact of reality; the painting had to hold up against, withstand or subvert the real. Much of this lies behind Whiteley’s use of the tree branch in the present painting. Typically of Whiteley’s painterly vernacular, however, the branches in Kurrajong are enhanced with a curvaceous, flesh-toned outline, bringing an indelible human sensuality to the painted scene thus hinting at his other great source of inspiration: the female nude.

In total, Whiteley’s painting Kurrajong is typical of Whiteley at his most relaxed and rested. Here in this painting there is no hint of the mental storms that seem encapsulated in his more well-known works. It has dash and bravura in handling but it is not overwrought. This accomplished painting is private and personal and its attributes reflect the inner Whiteley – the Whiteley who responded to the open plains of inland New South Wales and the inner Whiteley who was less well known.