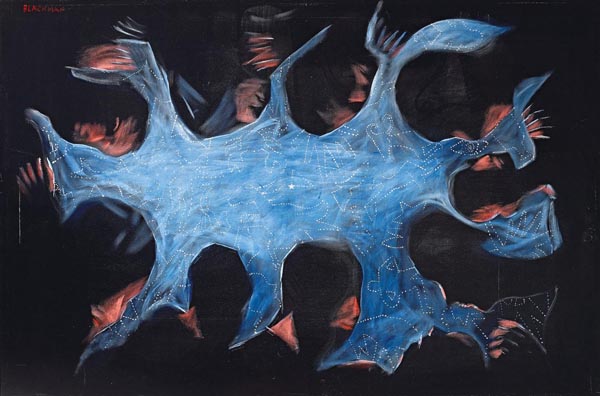 By Marguerite Brown MA - Art Curatorship in Blog
Lot:
Song of the Flute

In this depiction of a celestial night sky, Charles Blackman creates an evocative fusion of the human and the cosmic. A leading figure in the modern Australian art movement of the mid-twentieth century, Blackman’s work has always been defined by its originality, and expression of psychological complexity and ‘profound ornamentation.’1 The present work is a classic example of Blackman’s imaginative vision.

Blackman forged his career in the blossoming artistic milieu of 1950s and 1960s Australia. He was a member of the infamous Antipodean group of figurative painters, who, led by Bernard Smith (1916-2011), arose in backlash to the dominance of abstract art that was taking hold of contemporary painting. Two years later in 1961 his work featured in the seminal exhibition Recent Australian Painting at Whitechapel Gallery in London, curated by Bryan Robertson who was then Director. Robertson arrived in Australia in 1960 and discovered an exciting raft of painters such as Arthur Boyd (1920-1999), Sidney Nolan (1917-1992) and Charles Blackman (1928-2018). These artists were doing something new, interesting and uniquely Australian, and Blackman was at the vanguard of this Australian School of contemporary art.

By the early 1980s when the present work was created, Blackman’s success locally and in the UK was well established. He married artist, ceramicist and jeweller Geneviève de Couvreur (born 1958) in 1981, and the couple moved to the small town of Buderim on Queensland’s Sunshine Coast. With renewed creative vigour perhaps inspired by his new life and the fecund natural surrounds of his coastal hinterland home, Blackman embarked on this new series and diversified his thematic vocabulary.

Blackman also began working on a number of projects where his idiosyncratic style and poetic surrealism found new forms of visual expression in the set and promotional designs for ballet and theatre productions during the 1980s. In 1982 he collaborated on the Sydney Dance Company’s production Daisy Bates, a performance piece based on the life of a white woman who lived with Aboriginal communities in central Australia at the turn of the century.

Around this time the night sky emerged as a motif for the artist, one which may have had its roots in his theatre work. Shapcott notes that ‘It is in the sense of space, the vastness of the Australian night sky, that Blackman’s most persuasive feeling for the world of Daisy Bates finds expression.’2 It was not until 1988 that his interest in starry skyscapes reached a pinnacle in the ambitious theatre collaboration, The Celestial Mirror, a bicentenary project commissioned by the West Australian Ballet and performed around Australia. In her review of The Celestial Mirror, critic Jill Sykes wrote of Blackman’s set design:

‘At first, there is just a starry tracery of human and animal outlines on the backcloth. Then the lights come up to reveal a circle of shadowy heads around the perimeter: it’s as though the audience is in a deep hole, with people peering out of a brilliantly clear desert night sky above. The theatrical power of this design is amazing, and quite disorienting in an exhilarating way.’3

This description could be written about Song of The Flute which was created approximately six years prior, thus revealing Blackman’s early arrival at the idea to depict a night sky surrounded by shadowy figures. It is a composition that arouses wonder and curiosity, with its unusual perspective and ambiguous faces. They might be looking into a deep rockpool that reflects the starry skies above, or perhaps they occupy a spiritual plane, as ancestral guardians gathered at the edges of the night sky. Blackman leaves the painting’s interpretation to the viewer, yet his combination of elusive figures with a night sky filled with animal shapes delineated as points of light, creates an effect that is undeniably magical.

This and other works produced in the 1980s illustrate a blossoming of diverse subject matter that evolved within Blackman’s oeuvre during this period, while retaining the hallmarks of the artist’s particular, dreamlike vision.