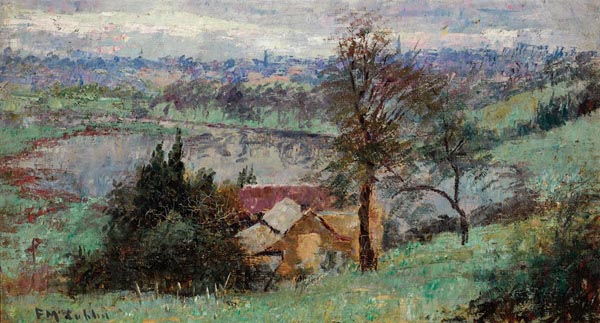 When Frederick McCubbin and his family moved to 42 Kensington Road South Yarra in the latter part of 1907, the rambling grounds and elevated position provided an abundance of subjects for his brush. It inspired a number of masterpieces of which Moonlight 1909, in the collection of the National Gallery of Victoria, was one of the first. The McCubbin’s grounds bordered on the Como estate, crowned by its stately mansion, then owned by the Misses Armytage. The present work, Como, focuses on the gardener’s cottage, a somewhat dilapidated group of buildings, which McCubbin loved to include in his paintings. It also had that “early settlers” appeal which so attracted McCubbin. His youngest daughter, Kathleen, commented on the cottage in her book Daisy Chains, War, then Jazz.1 She told the author many years before, ‘In the long grass, just near this old cottage at Como, I remember seeing two head-stones engraved with the names and dates of departed pioneers’. The cottage is said to be one of the first prefabricated buildings brought out to Australia. It sits on the fence line between the two properties. In the background Como Park is seen flooded by the waters of the Yarra River.

The images listed in related works move progressively back from the close-up view of the gardener’s cottage of the first to the final, grand landscape of Moonrise. In two other similar views, Colour Note at South Yarra and (The Yarra in Flood), in private collections in Sydney and London respectively, both draw more attention to the floodwaters of the Yarra spreading over what is today Como Park. They also lead on to other landscape masterpieces of the area by McCubbin.