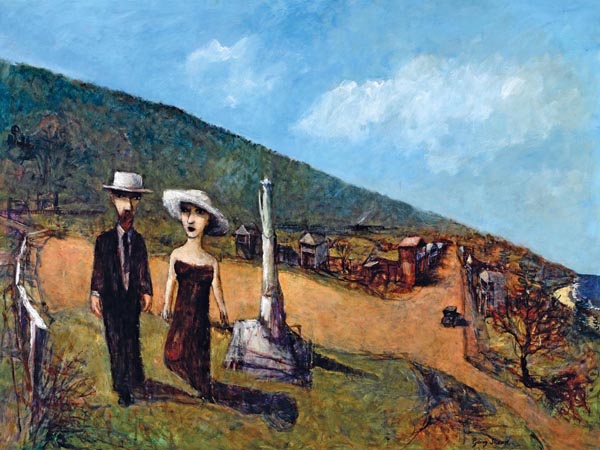 Set in the New South Wales south coast town of Thirroul, the present work is part of a series of works painted by Garry Shead in response to the writings of Englishman David Herbert Richards “D.H” Lawrence (1885-1930). The artist discovered the author’s work as a young man however it was not until later in life that Shead committed to a series of works based on Lawrence’s book, Kangaroo. When he began painting the series, Shead was living in Bundeena, just north of Thirroul, the small town south of Sydney where Lawrence had lived with his wife Frieda in 1922 whilst he penned the book. Shead’s D.H Lawrence series of paintings can be seen as indirectly autobiographical; Shead is transposed into the figure of D.H Lawrence while Shead’s wife, Judith, is represented by the figure of Frieda. The paintings are not narratives of the book nor are they experiences of Lawrence and Frieda - Shead’s paintings convey the artist’s affinity to the book and Lawrence’s association to Thirroul. Of the D.H. Lawrence paintings, art historian Sasha Grishin noted:

‘Shead’s [paintings] are a personal, intuitive response to the novel, rather than an attempt to illustrate the narrative. The imagery has much to do with the Lawrences at Thirroul, as with the characters in the novel. Richard Somers and his wife Harriet, of the novel, in the paintings appear as strange and ambiguous figures, at times taking on the features of Lawrence and Frieda, at others, having more than a passing resemblance to Shead and his wife Judith.’1

In this work from 1992-93, the artist explores the relationship between Kangaroo’s protagonists and the town of Thirroul whilst simultaneously creating a vision of his inner self. Here, Shead depicts the couple facing the viewer, standing solemnly gazing out towards their audience. Not far from the pair stands an ANZAC monument, a subject that has been explored by Shead in a number of oil paintings and prints. With the exception of a small motor car in the background, the town is devoid of any human presence which creates a sense of intimacy between the figures of Lawrence and Frieda. Sasha Grishin, writing on Shead’s D.H. Lawrence works, describes the connection between Shead’s work and Lawrence: ‘the paintings…create a rich and ambiguous fabric of vision…they are wonderfully vivid allegorical paintings.’2

Here, the present work is set against the dramatic backdrop of New South Wales’ south coast - Shead faithfully depicts the native landscape and brilliant blue coastline of this area. The historic town and buildings of Thirroul are represented here as they were in Lawrence’s writings. The artist has carefully preserved the spirit of the novel whilst retelling the story in his own distinctive visual language. Here, Shead successfully captures the essence of what Lawrence describes as ‘the strange, as it were, invisible beauty of Australia, which is undeniably there, but which seems to lurk just beyond the range of our white vision.’3