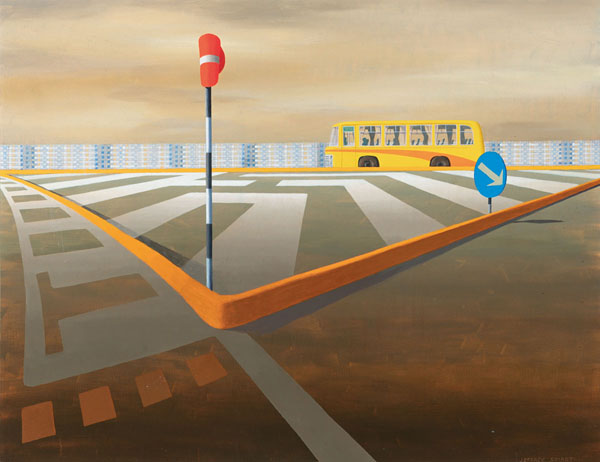 By Ken Wach
Lot:
Bus by the Tiber

Jeffrey Smart’s Bus by the Tiber of 1977-78 is not a mere picture of something that was seen, but of something that was created into being. That is, it was thought into existence. Consider, for a moment, the cravated Smart on the balcony of his sprawling Tuscan villa stretching back in a favourite chair ruminating on a recent car ride (he did not drive) through the bewildering profferings of an Italian city – perhaps even, as the title of the present painting clearly suggests, Rome itself. Hundreds of flickering images of the scenes offered by just such a ride flash through his mind – his photographs record them; colliding images confirm them and slowly his sensations condense into mental impressions. In other words, the subject matter of Smart’s best paintings, such as Bus by the Tiber, is sought and then caught.

Sometimes, somewhere, somehow during his many driving expeditions there were some things that his mind responded to – for Smart, it was always a type of gathering; a type of capture.  What Smart captured and responded to were oddly pregnant silences, empty public housing estates (with no steam or smoke rising, no trees, no animals, no children, no signs of life) and deserted scenes. He preferred images of urban existence as though it was contained in a contaminated zone, where human life seemed uncannily denatured. For him, human beings seemed to survive rather than thrive in their urban environments. He preferred such images, not because he was perverse or morose but because of the way that they seemed to mirror what he saw as the deadening aspects of the contemporary urban city – a ‘savage environment’, he called it. Such observations help to unfold the uncanny power of Smart’s imagery. Always in Smart, we feel the presence of a weighty theme arising from an empty scene.

It is important to stress that this is not a type of stoic world-weariness or emotional lassitude – as perhaps found in Edward Hopper’s (1882-1967) works. Smart is much more compassionate – he is never acerbic and does not smirk or roll his eyes. Despite appearances, his is not an aristocratic gaze. That is, Smart’s position is nowhere near that afforded by an ‘on high’ view, but more in the nature of a private rumination borne of a conscious, emotionally distanced seclusion away from the scene – his was an almost Proustian enterprise. Moreover, Smart’s cityscapes are never nostalgic – for him, it’s never Italy as it once was, but as it has now become.  Likewise, there is in his paintings no sense of ‘escapism’ or easeful ‘retreat’. Smart’s paintings are never otherworldly but very much ‘this-worldly’ and he reveals this world anew.

Smart’s cityscape paintings are pointedly observational. So much so, that we all now instantly recognise his meticulously painted cityscapes as the lived-through and unvarnished realities that confront us on an almost daily basis. However, Smart does not make such urban ubiquities any more bearable – that is, he does not prettify them. More to the point: he makes them ponderable. This sense of ponderability is one of his greatest achievements.

Moreover, Bus by the Tiber demonstrates a compositional finesse. Smart’s paintings have a distinctive structure – a hidden scaffold that supports their pictorial power.

A marvellous thing happened to Smart in 1939. This occurred at the age of eighteen when he met the influential Adelaide artist Dorrit Black (1891-1951) at her home and studio in the suburb of Magill in central Adelaide. The meeting between Smart and Black was quite eventful and the memory of it stayed with the young artist, even fifty-eight years later when he recounted it in his autobiography:

While I was at Art School, a group of us were invited to Dorrit Black’s studio … She sat us down and then generously gave us all her notes, details of dynamic symmetry, which she had learnt from Lhote and Gleizes in Paris. ... Dorrit taught us above all to make pictures, to examine the bare bones of composition. The design, the composition was all-important. The word that impressed was ‘when you make a picture.’1

It suddenly dawned upon the young Smart that a painting is a pictorial construction. In his mind making a thing was a more comfortable idea than creating it. Creation implied supreme talent and being overcome by inspiration. It must have come as quite a relief to hear of another way of producing a painting. The fact is that very few paintings are ‘inspired’ (literarily ‘breathed in’) and many more are based upon dogged work, numerous modifications, sketches, studies and the like.

With this in mind, it is useful to remind oneself that Smart did not just simply paint his canvasses – he constructed them. That is, he first carefully planned his paintings out in a series of compositional arrangements and constantly reworked them. It is as though there are two stages in his creative procedure: there is the underlying structure of proportions, shapes, and visual arrangements with their repetitions, harmonies and balances; then there is the overlaid superstructure with its elements from observable reality. Consequently, Smart’s paintings were often carefully gridded out and the images were then recreated on canvas with many changes being made to the placement and scale of the forms and elements in the final painting.

One may clearly see this in his preparatory study for Bus by the Tiber – his First Study for Bus by the Tiber of the same years and the very closely related colour lithograph The Waiting Bus of 1986. Each of these studies clearly shows variations of composition that became more fully resolved in the present final painting. Note, for example, the reworking of the left side of the composition; the removal of the human figures; the change in the character of the sky; the shifting of the right side of the work over to the left; the addition of a traffic sign; the straightening-out of edging and, most obviously, the rearrangement of the car park markings to suggest a labyrinth. Smart’s more heavily shadowed completed painting, Bus by the Tiber, has much more of a silent foreboding with its miasma of effects and shadows, darkening clouds and eeriness – it has what he called ‘visual weight’.

Smart’s fame abounds: in 1999, The Art Gallery of New South Wales mounted a large and highly successful retrospective exhibition of his paintings, which travelled to the Art Gallery of South Australia in Adelaide, the Queensland Art Gallery in Brisbane and the Museum of Modern Art at Heide in Melbourne. Additionally, the Anne & Gordon Samstag Museum of Art in Adelaide hosted an exhibition, Master of Stillness: Jeffrey Smart Paintings 1940–2011, which toured to the TarraWarra Museum of Art in Victoria in late December 2012.

Jeffrey Smart’s Bus by the Tiber is a signature painting by the artist that exemplifies his unique and incisive artistic imagination.