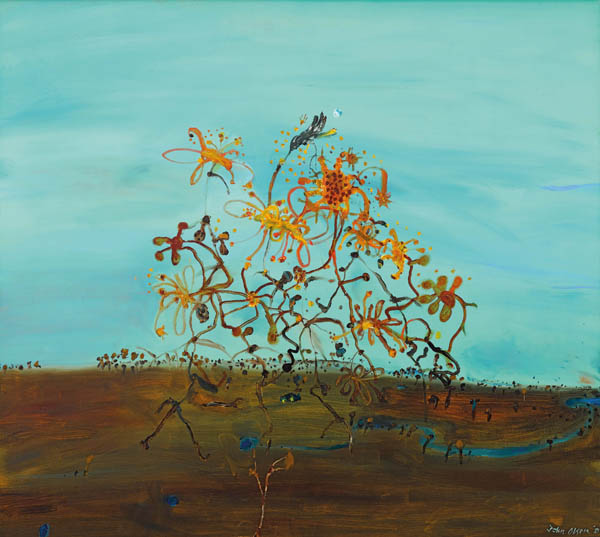 By in Blog
Lot:
Evening with Passing Wildflowers

In July 1981, John Olsen moved to Clarendon in South Australia, where he purchased ‘The Old Rectory’, built in 1850. The building was situated on top of a hill overlooking the village of Clarendon, and Olsen recognised immediately that ‘this environment, characterised by voluptuous rolling hills and a village atmosphere, would have a considerable impact on his work’.1

Evening with Passing Wildflowers was painted in Olsen's first year at Clarendon. This work is a highly poetic and romantic description of Olsen's surroundings, depicting the distant horizon, and the countryside darkened by the receding light. ‘The bird feasting on Grevillea is a New Holland Honey Eater, and you can see the lights from the house, where I was probably preparing paella in the kitchen.’2 The ever present looping and calligraphic lines that form the Grevillea are representative of the pulsating, living natural landscape in which Olsen immersed himself.

The move to Clarendon proved to be a fortuitous choice for Olsen and saw a resurgence of confidence in his oil paintings. 3 He was completely open to his new environment, absorbing everything around him. This connection with the countryside allowed him to experiment more and it was a place where 'Olsen’s romantic, poetic vision could come alive.’4 Over the next seven years living in Clarendon, Olsen was to produce some of his most memorable works, regaining the momentum and confidence of his earlier work from the 1960s.