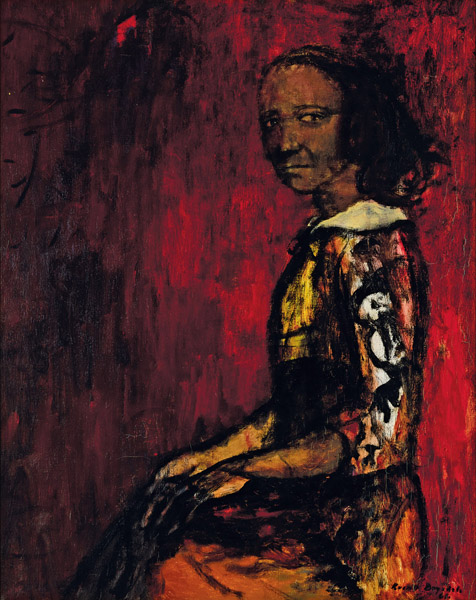 Sir Russell Drysdale was one of Australia’s most remarkable artists. He held seventeen solo exhibitions and participated in fifty-five group exhibitions. Drysdale’s works are rare and his output was comparatively low as he produced fewer than three hundred paintings. However, his undoubted artistic standing in Australia is attested to by the fact that he has been the subject of eleven retrospectives and his paintings were selected for nineteen major national and international survey exhibitions.

Good art is so often the result of thought and visual experience and the recording of scenes is now left to photography. On the ample evidence of his words, letters, sketches and paintings, Drysdale’s scanning attentiveness and the contents of his ‘inner storehouse’ were remarkable.  His visual recollections sprang from places, events and images that were viewed and funneled into his mind during visits and journeys, rather than gained through any lived-in or long-term experience. Obviously, his was an active imagination that was prompted by equally active seeking and his approach to picture making was based upon what may be called a ‘visitational mode’. This approach relied upon the collection and visual recording of tessellated views, which were then used to ‘piece together’ aggregated and multi-layered recollections. The jotted-down and jumbled contents of Drysdale’s many sketchbooks and the fact that he avoided painting outdoors and only worked in the reflective calm of his studio bear out this observation. These observations about associationalism, modes of seeing and diaristic images in Drysdale’s painting are supported by an overlooked fact.

From an early age, Drysdale became increasingly blind in his left eye from slow retinal detachment and his increasingly monocular vision imposed certain screen-like and depthless characteristics upon his paintings, especially those that are heavily worked over or based upon many preliminary sketches. Monocular vision, within a range of five metres, has various optical limitations and Drysdale’s paintings embody many of these. Certainly, an actual view of a near or distant landscape extends well beyond five metres, but painting a canvas does not. Therefore, Drysdale’s paintings have very unusual optical characteristics: the relative size of items in the picture plane is ambiguous and volume is not rendered accurately. Furthermore, pictorial space is compressed, perspective is unconvincing, shadows are suffused and often do not fall accurately, object occlusion makes spatial distance vague and the spaces between overlapping objects are hard to estimate. Consequently, Drysdale’s scenes seem shuffled together in flat planes rather than being depicted in volumes – they seem like backdrops and do not have a ‘hole in the wall’ perspective. These are important reasons why they look so modern for their time – the eye scans the flat planes of his paintings rather than reading them naturalistically. So often, in Drysdale, it is as though certain optical elements and expected pictorial characteristics have been edited out, making the overall visual effect more powerful through its compressed pictorial space. This is most clearly seen in the powerful frontality and spatial compression of Drysdale’s significant painting entitled Half-caste Woman of 1961, formerly in the famous Harold E. Mertz Collection of Australian Art in New York, as selected by the highly perceptive Adelaide art dealer and collector Kym Bonython.

The cultural influence of the publicity surrounding the idea of Aboriginal Assimilation in the mid to late Fifties in Australia cannot be underestimated. Many of the issues that underpinned this political idea were implicit in the Aboriginal Act of 1939 and its protectionist agenda, which tacitly, and sometimes not so tacitly, promoted the absorption and assimilation of Australian Aborigines. Times changed and assimilation was taken over by the concept of integration and then in turn by policies of self-determination. It is easy to speculate that Drysdale’s humanistic temper was deeply offended by what was happening to Aborigines and what the Australian Federal Government was proposing in the early to mid Fifties. Drysdale’s feelings about miscegenation together with integrationist and assimilation issues are made clear: in these schemes, the Australian Aborigine is doomed. Drysdale’s paintings on this theme exude deep empathy. This emotion accounts for the strange wistful qualities of Drysdale’s half-caste Aboriginal portraits, which gaze out at the viewer as though caught in a fateful web not of their own making.

Drysdale’s oil painting, Half-caste Woman of 1961 demonstrates all these attributes and it is an iconic example of the forty-nine year old artist at his best. The painting presents a slightly more than torso-sized portrait of a young half-caste woman who sits looking over her left shoulder and out at the viewer. The figure’s face is almost impassive and its features seem to display a resigned stoicism. Drysdale has placed the figure to the right of the canvas and visually balanced it with a large left-side section of red and burgundy tones, which are painted with free and loosely applied brushstrokes. The figure’s short-sleeved blouse is also loosely painted and almost calligraphic in its execution, with patches of white, scarlet, black and yellow handled with almost dry brush applications of pigment. The fact that the woman wears European dress adds to the odd poignancy of the painting. Drysdale has allowed no sentimentality into the painting thereby underscoring the young woman’s sense of resoluteness. There is considerable sympathy in the depiction of this half-caste woman, perhaps because, curiously, Drysdale saw himself as something of a half-caste – a composite identity made up of two parts. Mindful that he was born in England and had adopted Australia as a new home he was aware of being neither one thing nor another. In an undated letter to the Swiss-Australian critic and writer Paul Haefliger (1914-1982), probably written on Tuesday 10 December 1957, he revealed the following:

You know that you’ll never be Swiss again as I could never really be an Englishman, despite my birth in that most English of watering places, Bognor, nor my preparatory school training. … I assume that Switzerland is really only for the Swiss as England is only for the English. Aussie is for all of us. Both of us curiously have fled to Europe for emotional reasons. Maybe at the back of our minds we’ve accepted the formula that Europe is a superior milieu, whose contacts, culture and sophistication can provide a background within which we can ease ourselves, and use painting as a magic shoe horn, make it all the more acceptable. I know that I can never look at Europe as a European and as a painter never really be other than a half-caste … (author’s italics)1

Drysdale’s highly accomplished painting Half-caste Woman of 1961 may be instructively compared with his 1960 work of the same title in the collection of the National Gallery of Australia in Canberra. One can see that this earlier painting is much more restrained in its treatment, it is psychologically less confrontational and its paint handling is far more conventional. One year later, as can be amply seen in the present lot, Drysdale paints with free and deft touches that are more assured than his earlier foray into the same theme. This new assuredness is also amply seen in Drysdale’s painting Mother and Child of 1961, where the deft handling of paint and the free suggestion of form mimic that of his Half-caste Woman of the same year.

Considered in these ways it is distinctly possible that Sir Russell Drysdale’s oil painting Half-caste Woman of 1961 is an artistic culmination that encompasses all of the aesthetic characteristics that occupied him during this important period of his life. It was painted during the year that Drysdale had a retrospective exhibition at the Queensland Art Gallery, won the Henry Lawson Festival Award, had a film made about his works sponsored by Qantas and held a successful solo exhibition at the Macquarie Galleries in Sydney. For all these reasons, Russell Drysdale’s painting Half-caste Woman of 1961, a work with an excellent provenance and exhibition history, is an important painting that stands as one of the artist’s finest creations during the early Sixties.

1. Drysdale in a letter to the Australian writer and critic Paul Haefliger cited in Klepac, L., The Life and Work of Russell Drysdale, Murdoch Books, Sydney, 1983. p.152