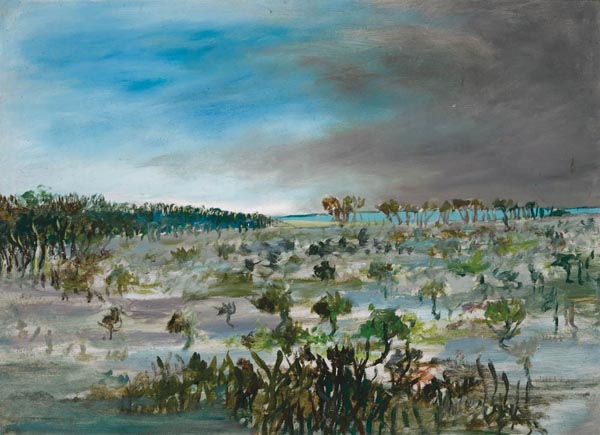 In retrospect there is often a sense of inevitability about the success of a now-famous artist, especially one as alert to the Australian experience as Sidney Nolan. But when Nolan’s Fraser Island paintings were first exhibited at Brisbane’s Moreton Galleries in February 1948, their reception was all but favourable. Swamp was the only painting sold off the wall, having been purchased by Leopold Lofkovits, a Brisbane-based doctor.1 Nolan was berated in the local press, not least by ‘E.C.W.’ of the Courier-Mail:

The only excuse I can find for Nolan’s blatant extremism and what appears to me to be deliberate maltreatment of so much useful and hard-to-come-by building material (all his “works” are on Masonite), is the artist’s lack of maturity. With youth’s love of self-exhibition he has employed all the tactics of shock. These monstrous daubings […] simply defy description.2

Presumably ‘E.C.W.’ did not relish her employer’s decision to place Swamp on temporary display in the foyer of the Courier-Mail building the following year. While it is tempting to brush aside such derision in light of Nolan’s subsequent triumphs, this is perhaps to overlook the sheer radicalism of his contemporary vision. As Clive Turnbull wrote in a preface to the 1948 exhibition catalogue, ‘To me Nolan is a lyrical painter with a unique vision who has had the courage to ignore the stale imitation which so often passes for socially acceptable art in Australia […] I suggest that the beholder approach [Nolan’s art] with an open mind. It will not be like the work of Mr X or Mr Y of the Academy. It is not meant to be.’3

Nolan first ventured to Queensland in July 1947, inspired by the recollections of his patrons John and Sunday Reed, who had visited a year earlier. Nolan’s particular fascination for Fraser Island was shaped by his encounters with Tom Harrison, a former British soldier and ornithologist who was a regular visitor to the Reeds’ home at Heide. Having been stationed on Fraser Island during World War II, Harrison spoke animatedly of its sparkling beaches and abundant bird life.4

Fraser Island was also the setting for one of the more bizarre episodes in Australia’s colonial history. The island takes its name from James Fraser, captain of the ill-fated Stirling Castle, which was wrecked off the Queensland coast in 1836 after having struck a reef en route to Singapore.5 Taking to a lifeboat, Captain Fraser and his wife Eliza came ashore on the island’s northern tip, along with several other seamen. Fraser was later speared to death by members of a local Aboriginal tribe, whereupon Eliza fled into the jungle, accompanied by David Bracefell, an escaped convict. After enduring several months together in the wilderness, the duo made a pact: if Bracefell could successfully navigate their way back to civilisation, Eliza would plead for his official pardon. The convict upheld his end of the bargain, but the wily Mrs Fraser had other plans. When she was eventually found by a colonial rescue party in August 1836, Bracefell remained on the island, having once again absconded for fear of recapture.6

In Swamp, Nolan introduces an element of menace to an otherwise innocuous scene. Dark masses of cloud encroach upon a patch of blue sky. A narrow sliver of turquoise water is visible beyond a tangle of mangroves and scrub. Although human figures are noticeably absent, the scene is pregnant with allusion. As Jane Clark has observed, ‘everywhere in this landscape the historical actuality of Mrs Fraser – naked in the mangrove swamps, merging into the rainforest – became a living focus for [Nolan’s] imagination.’7 Other works in this series depict Mrs Fraser as an otherworldly creature, crouched and naked amidst the jungle’s rank undergrowth. To Nolan, Eliza Fraser offered a compelling image of a woman stripped of civilisation’s accoutrements - of a human being reduced to a ‘poor, bare, fork’d animal.’ Nolan’s pre-eminence within twentieth century Australian art is explained by this ability to reconcile the actual and metaphysical, using a pictorial language of his very own.