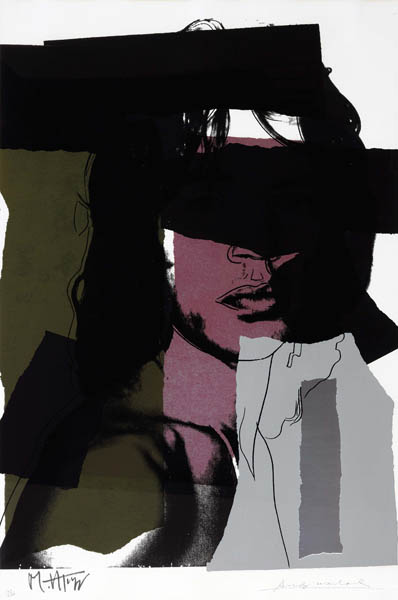 Andy Warhol had met Mick Jagger in 1963 when the Rolling Stones were not well known in the United States. Warhol had designed the band’s provocative album cover, Sticky Fingers, which caused a stir when it was released however the attention gained for both the band and the artist was gratefully received. Following the huge success of the album cover Warhol, ever keen to make money, lamented that he had not been paid enough given the millions of copies that sold. No doubt with an eye for financial success, Warhol turned to the subject of Mick Jagger, now a celebrity friend and part of the New York club scene.

In the summer of 1975, Jagger and his wife Bianca rented Warhol’s house in Long Island. There, Warhol took dozens of photographs of the singer from different angles, later narrowing the group down to the most successful. Warhol particularly liked Jagger’s photogenic, ‘bad-boy’ image and was fascinated with the singer’s angular jawline which he accentuated with light and shadow. Jagger is depicted in this image bare-chested, looking straight into Warhol’s camera. He has incorporated blocks of irregularly shaped colour which, although printed, appear like collaged fragments of coloured paper. In combining this with (printed) hand-drawn elements, the work appears more expressive than his earlier screenprints. The abstract quality of the blocks of colour shows the development of Warhol’s interest in more non-representational art that was emerging in the 1970s.

Here, Warhol describes the appeal of working with Jagger, ‘He’s androgynous enough for almost anyone. That’s always been his basic appeal, mixed with the facts that: 1) He’s very talented; 2) He’s very intelligent; 3) He’s very handsome; 4) He’s very adorable; 5) He’s a great business person; 6) He’s a great movie star; 7) I like his fake cockney accent… Image is so important to rock stars. Mick Jagger is the rock star with the longest running image. He’s the one all the young white kids copy. That’s why every detail of his appearance is important.’1