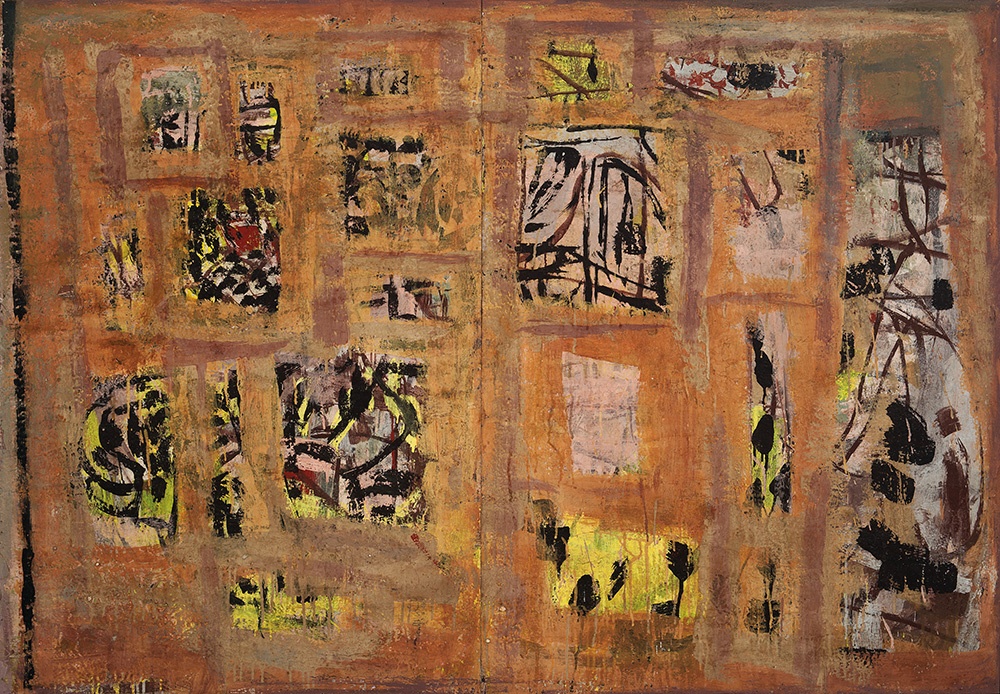 By Associate Professor Ken Wach in Blog
Lot:
Composition in Orange and Yellow

Ian Fairweather is one of Australia’s most enigmatic and respected artists – special rooms of his work are set aside in the Art Gallery of New South Wales and Queensland Art Gallery.  Fairweather’s paintings are also very keenly sought after and his paintings are rare as he destroyed much of his work and many were lost through mildew, fire or rodent damage – even an official touring retrospective in 1994, organised by the prize-winning author Murray Bail for the Queensland Art Gallery, could muster up only sixty-four paintings.

Fairweather’s painting Composition in Orange and Yellow of 1963 comes from an important period in his life when he more fully embraced abstraction and his paintings were bought by the National Gallery of Australia in Canberra. His exhibition in August of 1963 at Sydney’s Macquarie Gallery which included Composition in Orange and Yellow attracted very favourable reviews and the art column in the Sydney Morning Herald bore the heading ‘Fairweather now seen as our greatest painter’ - John Henshaw, Daniel Thomas and Robert Hughes joined in the praise in their respective writings on this significant exhibition. Fairweather’s painting Composition in Orange and Yellow is one of his most characteristic and calligraphic works and comes two years before he represented Australia in the 7th Bienal de Sâo Paula in Brazil and was included in the Australian Painting Today exhibition, which toured Australian State galleries and travelled to Paris, Amsterdam, Milan and Bonn.

Fairweather was born on 29 September in 1891 in the town of Bridge of Allan in Stirlingshire in Scotland and he was the youngest of nine children. Fairweather’s father was a Deputy Surgeon General and worked for the Indian Medical Service attached to the Twenty-Second Punjabi Rifles and his mother originally hailed from the Isle of Jersey. Upon Fairweather’s birth his parents decided to leave Scotland to live in India and they left their baby son in the care of various aunts - he did not see his parents at all for the next ten years. It is difficult to determine what effects this separation might have had. Certainly, such traumas have effects and though they are unusual, they are not uncommon through early deaths, desertion, wartime casualties and the like. Additionally, living with other families and being tolerated rather than accepted carries its own private strains and some commentators see this early juvenile period as somehow linked to Fairweather’s later legendary solitariness - there may well be truth in the old proverb ‘as the twig is bent, so grows the tree’. Fairweather’s parents returned from India in 1902 and the family moved to live at Beaumont on the Isle of Jersey. Fairweather was educated there at Victoria College and tutored privately in Earl’s Court in London and at Chempéry in Switzerland. He entered army officer training in Belfast and, at the outbreak of World War I, was commissioned as a Second Lieutenant in the British Army. He was captured after just two months near Dour in France and sat out the rest of the War in various prisoner of war camps around Germany. This enforced period of confinement led him to discover the writings of Ernest. F. Fenollosa (1853-1908), an American scholar of Japanese aesthetics and the Professor of Philosophy at Tokyo University, and the immensely popular books on the Orient by the Irish writer Lafcadio Hearn (1850-1904). It is hard today to imagine the impact that these two writers had upon the popular imagination, but suffice it to say that they unlocked the East to millions. For Fairweather, the intellectual effects of his new literary diet must have been dramatic as, soon after, he started to learn Japanese and took up drawing. In 1918, he was in The Hague in Holland and started art studies at the Royal Academy of Art, Europe’s oldest art school, as well as taking private classes with the respected Dutch Realist artist Hendrik van Mastenbroek (1875-1945). Fairweather resigned his Army commission in 1919 and took up further art studies at the Slade School in London and returned to learning Japanese and later Chinese at London University’s School of Oriental and African Studies as well as taking in the treasures of the National Gallery and the British Museum. His art works came to the attention of Leverton Harris (1864-1926), the noted London art collector and politician, who supported Fairweather for two years until 1927 even though only four canvasses were produced - these were to be the only oil on canvas works Fairweather ever produced. Through contacts at the Slade School Fairweather formed a life-long friendship with Harold Ede (1895-1990) who was the Assistant Curator at London’s Tate Gallery and later the famous founder of the Kettle’s Yard Gallery of the University of Cambridge. Through Ede, Fairweather became aware of the latest art in England and Europe and confirmed his artistic path.

Fairweather’s artistic path was characterised by a very footloose approach and seemed to depend heavily upon the input of almost constant travel. It was as though living and working in other countries supplied him with the right subject matter and the right impulse to create. This is not unusual in artists looking for fresh sensations and the habit still exists to this day. However, what is unusual is that Fairweather’s travels were mostly restricted to Asian locations and that they started in 1929, a time when very little was generally known about Far East countries, as they were then called. There must have been something in Fenollosa and Hearn’s writings that deeply stirred Fairweather’s nomadism and propelled him through China, Japan, Taiwan, Hong Kong, Borneo, Bali and the Philippines. It is important to note that Fairweather was not an Orientalist who, as in much Nineteenth Century Colonial art, looked for exotic stimuli and imposed Western modes upon them. Nor was he driven by any ethnographic curiosity to depict the habits and customs of foreign peoples and cultures and he possessed no anthropological imagination that would limit him to making studies and comparisons of societies and patterns of living. On the contrary, Fairweather did the opposite and tried to learn the modes of seeing of the people he was with and there is something of the autobiographical about his paintings, as they are very much reliant upon the places and events that dotted his life. He later referred to these paintings as his ‘tourist pieces’, but the rueful self-deprecation of this phrase overlooks the fact that what Fairweather was doing was far more important than even he could have realised at the time. With contemporary hindsight it is possible to see that what Fairweather was doing was trawling the East and gathering visual data - the local colours, the stains on temple walls, graffiti on fences, the fluidity of batik cloth, the patterns of printed fabric, the flow of line on a scroll, the warmth of old tiles, the textures of thatched rooves - so that he could construct a visual grammar of form that arose from observed local experience. So successful was he in this that his subtle paintings of the period sit well in their locations and do not look as though a Westerner created them. The paintings’ colours, themes and tones are appropriate and blend within the ambience of a village - they are never paintings that shout for attention. This is quite different from some Western artists who visit the East and paint works that are intended for a Western wall and are conceived of as souvenirs of time spent in a foreign land - they so often flaunt and wave about their sense of place and pepper walls with ‘interesting’ oddities.

Fairweather’s paintings go well beyond the aesthetic limitations of any souvenir and have distinct formal and painterly characteristics: flat planes rather than recessional illusions; screen and frieze-like structures; scumbled surfaces; gestural paint work; no over-finishing; multi-layered surfaces; delicate colour harmonies; accidental effects; frame within a frame formats; a ‘stamped’ monogrammatic quality; a loose calligraphic line that renders form indistinctly and visual tension between background and foreground elements. These elements seem to be engendered in his work by a Taoist-like submission to the process of painting them - a type of ‘non-action’ aesthetic response that relies more on rumination and delectation than on getting a scene rendered naturalistically. Consequently, Fairweather’s paintings never look forced, their child-like informality looks natural and they generally look ‘self-made’. Fairweather’s very basic and hermit like existence in a shack on Bridie Island in Northern Queensland confirms these observations and his life there, where he painted his best works, seemed motivated by the three main Taoist principles: compassion, moderation and humility. Fairweather was the first Australian artist to live out and embody the attributes of what the Japanese and Chinese know as the ‘wandering scholar’ or the ‘hermit poet’.

An important point always gets overlooked: Ian Fairweather was the first Australian artist to adopt and display what might be called a Pacific Rim aesthetic. His itinerant life in the area provided him with a lexicon of appropriate forms and a visual vocabulary that his artistic mind concertinaed into paintings that are remarkable reconstructions of his sensations.