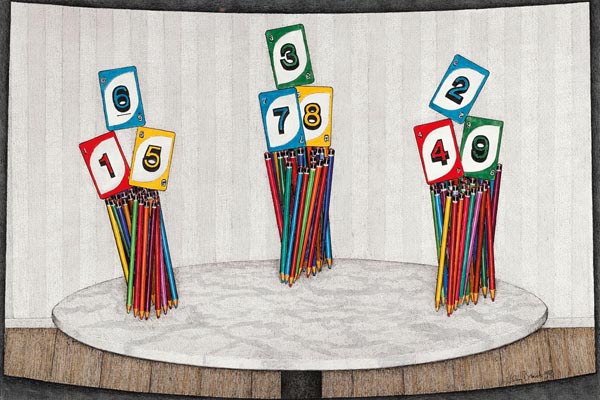 By Catherine Baxendale B Phil Hons in Blog
Lot:
Pantomime

Perhaps owing to the dominance of the Melbourne-Sydney divide in twentieth-century Australian art, it is often forgotten that John Brack was almost an exact contemporary of that other great figurative painter, Jeffrey Smart (1921-2013).1 Brack was born in May 1920; Smart in July 1921. Together they represented an antithesis to the Romantic ideal of the artist as a tortured, impulsive genius. There is nothing emotive about the works of Brack or Smart, for whom the creative process was foremost an intellectual exercise. Unsurprisingly, the two artists shared an admiration for the modernist writer T.S. Eliot (1888-1965), who declared that ‘no artist produces great art by a deliberate attempt to express his personality.’2 Both artists were consummate draughtsmen, whose compositions were the product of meticulous planning and a certain reverence for classical notions of formal and chromatic harmony. Smart and Brack’s images of post-war ‘urban realities’ are characterised by their formal clarity and precision, with bold colours and clean lines. The visual appeal of these images is immediate, but their deeper meaning is often elusive. As Patrick McCaughey writes,

John Brack is a genuinely complex artist, even if he may look direct, accessible and easy to read. The sheer clarity of the image and the firmness of the address are part of the delight, and engage the viewer immediately and naturally. Yet the imagery retains an ambiguous and enigmatic quality.3

These tendencies are evident in the present work, Pantomime, painted shortly before Brack’s seventieth birthday. In a display of impossible precariousness, numbered cards and coloured pencils are whimsically transformed into a trio of long-legged dancers.4  The playful theatricality of the scene is further enhanced by Brack’s use of a framing device to replicate the convex outline of a stage. There is something slightly disconcerting about the image, despite its apparent joviality. The exactitude of Brack’s draughtsmanship seems at odds with the composition’s physical implausibility, as the dancing cards teeter on the brink of collapse. Clearly the work is not intended to be taken at face value; as with so many of Brack’s paintings, it presents an elaborate artifice.

Pantomime, and the related oil painting of the same name, are closely descended from Brack’s celebrated ‘pens and pencils’ series of the early 1980s. In these works, the lowly genre of still life is elevated to the grandeur of history painting, as Brack employs humble items of stationery to re-enact famous military conflicts.5 The best known of these is The Battle 1981-83 in the National Gallery of Australia, in which a vast, warring sea of red and blue pencils is used to recreate the Battle of Waterloo.6 Although Brack took some interest in the intricacies of individual conflicts, the paintings carried universal implications. As McCaughey observes:

The still lifes of pens and pencils enabled Brack to go one step further and through the genre present almost abstractly some of the most profound forces of the present age. They allow him to give voice to a sense of hopeless division between antagonistic forces, of a world riven by perpetual tension, filled with potential or actual conflict7.

Despite the similarities in subject matter, Pantomime does not carry the grimness and gravity of earlier battle scenes. The mood of this painting is altogether lighter, more playful and optimistic.  In an apparent nod to his young grandchildren, Brack has exchanged the traditional playing cards of earlier works for those of the popular children’s game Uno. Brack had a certain affinity with children, and Pantomime contains a telling combination of innocence and mischievousness. Like his counterpart Jeffrey Smart, Brack possessed a rare talent for creating images of innate visual appeal, subtle humour and lasting intrigue.