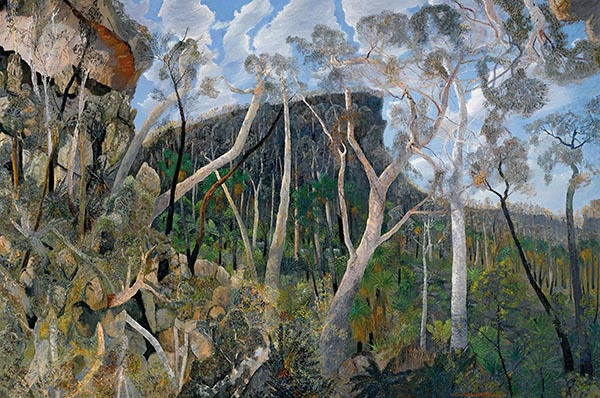 By Catherine Baxendale B Phil Hons in Blog
Lot:
The Sacred Rock, Carnarvon

William Robinson’s paintings of central and south east Queensland are unique in the history of Australian art, revealing an approach to the landscape that is at once intimate and all-embracing.

First emerging in the mid-1980s, Robinson’s imagery of sub-tropical rainforests signalled a major departure from the two dominant paradigms of Australian landscape painting: the pastoral landscapes of Arthur Streeton (1867-1943) and Elioth Gruner (1882-1939) in the 1920s and 30s; and the desolate outback scenery of Sidney Nolan (1917-1992) and Russell Drysdale (1912-1981) in the 1940s and 50s.1  Nolan and Drysdale’s paintings of central Australia emphasised its bleak monotony and harshness, with the artist assuming the role of visitor to a hostile and alien land.2  In contrast, Robinson’s landscapes celebrate the abundance and vitality of the rainforest: they are borne from a deep familiarity with and attachment to his immediate environment.  Robinson’s greatest innovation as an artist has been his abandonment of single-point perspective in favour of what he calls a ‘multi-viewpoint’, allowing the landscape to be glimpsed from multiple vantage points within a single image.3  To stand before one of Robinson’s landscapes is to become immersed within it – to be transformed from an observer to a ‘participant in the landscape.’4

Robinson’s foray into landscape painting came relatively late in his career, when in 1984 the artist and his wife Shirley purchased a rural property at Beechmont, in the Gold Coast hinterland.  Robinson began to explore his new surroundings on foot, making regular excursions into the neighbouring Lamington National Park:

When we moved to 208 acres [at] Beechmont I would spend weekdays and holidays doing rather thorough walks.  I was not purposely gathering the information but just letting the experiences happen.  I would go to my studio and unravel the experience.5

Robinson had already begun to experiment with unconventional perspective in his Farmyard series – his wonderfully outlandish paintings of the goats, cows and chickens that inhabited his old farm at Birkdale.  But the artist’s encounters with the rainforest at Beechmont would inspire him to experiment still further – to attempt to recreate on canvas what it felt to be fully immersed in this new setting.  As Lou Klepac writes:

Robinson found that a good way to integrate the landscape into himself was by walking through it.  The visitor walks through it once; the resident walks through it repeatedly, each walk revealing a new dimension, tearing away the barriers of preconceived ways of seeing … Robinson’s landscape was all around him.  In order to see it, to get to terms with it, and observe it closely, he had to swivel his body, turn his head, make physical contortions.  It is this change of physical attitude before a landscape which has produced these highly original paintings.6

In Robinson’s rainforest paintings, seeing becomes a physical act, such that what these works depict is not a view of the landscape but its overall sensation.   An inherent part of these images is what we cannot see: the sounds of birdsong and wind through trees; the invigorating scent of the forest floor after rain; the feeling of brushing against the ferns and palms that line a forest path.  In Robinson’s paintings, the landscape is made tangible.

The Sacred Rock, Carnarvon is part of a celebrated group of works inspired by Robinson’s visits to Carnarvon National Park in the central highlands of Queensland.  Encompassing some 300,000 hectares, this spectacular wilderness area is renowned for its dramatic sandstone cliffs, remnant rainforest and unique flora and fauna.7  The title of The Sacred Rock, Carnarvon may also allude to the spiritual significance of this landscape for its indigenous custodians – the Bidjara, Garingbal and Ghungalu people – whose ancestral links to the area stretch back over 19,500 years.8  The park’s principal attraction, Carnarvon Gorge, shelters outstanding examples of indigenous rock art thought to be over 3,600 years old.9

Robinson’s Carnarvon paintings show a slightly more orthodox viewpoint when compared with his Beechmont landscapes, which would often show inverted and enclosed perspectives of the forest canopy and sky.  To allow for the most remarkable aspects of the Carnavon landscape, Robinson has reintroduced the horizon line, as seen in the magnificent outline of rock in the present work.  The bold, wave-like form of this sandstone structure is replicated in the left of the painting, where we encounter a tumbling profusion of rock, gum trees and scrub.   In the centre, the slender trunks of lemon-scented gums combine with Carnarvon fan palms, cycads, ferns and flowering shrubs.  As with Robinson’s earlier works, however, the vanishing point remains absent, and there is little distinction between foreground, middleground and background.  The topsy-turvy elements of Robinson’s Beechmont paintings are still evident in the upper right of the present work – with its inverted, overhanging trees and rock – and the lower left corner, where contorted saplings splay out of sandstone boulders in all directions.

The Sacred Rock, Carnarvon reveals the evolution of Robinson’s painterly technique from his first landscapes of Beechmont in the 1980s.  Robinson’s earlier landscapes often resembled a tapestry, with the composition segmented into patches of forest and sky.10 In the present work this effect is far less pronounced.  Robinson’s brushstrokes have become noticeably finer, and his attention to the landscape’s precious detail – the markings on a tree, the leaves on a shrub – has become more acute.   Discussing his technique with Janet Hawley, Robinson explained:

Every brushstroke to me is real: real trees, real ground, everything is felt as if I am walking over it, nothing is just filling-in an outline … I use small brushes, and mix my colours one brushstroke at a time, so sometimes you can see one brushstroke with several colours on it … I like to work wet on wet, to go back into the paint when it is wet, rather than scumbling another layer over the top of dry colours.  I’m a slow painter, but I’m consistent.11

In The Sacred Rock, Carnarvon, we become aware of a juxtaposition between the eternal underlying structures of the landscape and the ephemeral living forms that inhabit it.  Coinciding with an era of heightened awareness of humanity’s impact on the environment, Robinson’s art ‘conveys not only the magic and mystery of the forest but also a sense of its transience.’12  In the Carnarvon Range, the dual force and fragility of nature was brought into stark relief in 2018 when bushfires ravaged the park, causing severe damage to ancient rock art sites.13  On a personal level, Robinson’s life has been marked by the loss of close family members – his father and two daughters – and his landscapes may be interpreted as meditations on the ultimate brevity of life.14  Robinson’s expansive vision of the landscape reflects a certain humility about his place in the world, and an acceptance of life’s unknowability:

We are only here for a very short time.  I don’t have the theological knowledge or brain power to understand why good or bad things happen, but they both happen … As you get older, you realise the finiteness of yourself in this infinity, the smallness of yourself in this universe, and this affects the way you try to understand your place within it.15