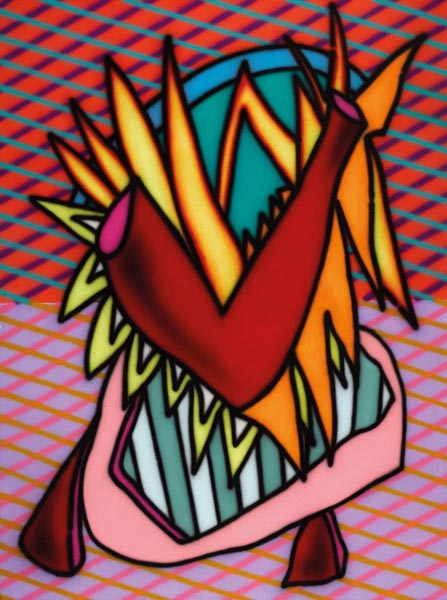 Despite his later reputation as a chronicler of suburban reality, Howard Arkley was always fascinated by what Sigmund Freud called “the uncanny” (das Unheimliche), the idea that strangeness lurks just under the surface of everyday life. Reflecting this interest, also a particular emphasis in Surrealism (an early Arkley influence), his 1970s visual diaries and sketchbooks were populated by a wide array of biomorphic creatures and plant/human hybrids, both real and imaginary. After he turned to figuration in 1981, various examples (including stylised cacti) infiltrated major works like the mural-scale drawing Primitive 1981, and paintings such as Schizo 1983.1

William and Sybil Harland’s book Growing Cacti and Succulents in Australia and New Zealand (Kangaroo Press, 1981) provided Arkley with a rich new source of inspiration along these lines. It supplied both visual and verbal inspiration, the swelling shapes, exotic flowers, and vicious spikes of cacti – at once familiar domestic plants, and the products of nature at its most excessive and bizarre – matched by a suitably extravagant array of botanical names.

Cacti made their first formal appearance in Arkley’s Cacti & Succulents show at Roslyn Oxley9, Sydney, 10-26 May 1984, with other works on equally spiky contemporary urban subjects, among them Suicide and two of the “Tattooed” canvases from 1983. The six works on paper on the title theme all sported mad scientist titles (Neocummgii, Euphorbia, Neo-Porteria and others) derived from the Harlands’ 1981 handbook.

Further examples followed, including Discocacti, one of three cactus compositions in Arkley’s Recent Paintings exhibition at Tolarno (September-October 1986), all featuring the trellised background of sprayed coloured lines Arkley first employed in 1980-81. Their strangeness and vivid energy complemented other edgy urban and suburban images in the show Fast, The Ritual, and the classic early house paintings Nubrick and Our Home, both dark, brooding and “unhomely” in character.

“Discocactus,” according to the Harlands, is ‘from the word disc [Greek: diskos] meaning flat or round, is … a flattish, disc shaped, round cactus which comes from Brazil, Paraguay and Bolivia,’ and generates ‘white, heavily scented, nocturnal flowers.’ But Arkley’s canvas is scarcely a faithful representation of any actual species of the genus. Bulbous and throbbing with vivid colour, it conjures up instead a surreal alternative world where life-forms merge and interbreed, and ordinary reality takes on unexpected oddity and intensity. The painting radiates an amped-up, hallucinatory quality, perhaps stimulated particularly by the plant’s botanical name, bringing to mind the artist’s earlier evocations of discothèque lights in Muzak Mural – Chair Tableau 1980-81 (National Gallery of Victoria collection) and Disco 1981. The light and colour in Discocacti are as exaggerated and theatrical as a dance-floor, and the fleshy, stridently coloured form struts centre stage, like an alien John Travolta.

In 1987, he refined the subject - first in an elegant group of works-on-paper cacti exhibited in June at the Bellas Gallery, Brisbane, and in September of the same year in his Suburban Urban Messages show at Roslyn Oxley9, where two key canvases, Physiognomy and Strange Fruit, both blended plant and human characteristics in unnerving fashion. As it turned out, these were to be Arkley’s last significant essays on the theme, as suburban imagery began to dominate his output increasingly after 1986. Nevertheless, he paid homage to cacti and succulents in a special section of his Casual Works exhibition (Melbourne and Brisbane, May and October 1988); the main work on paper (later auctioned by Bonhams USA, 4 May 2009, as No To Disco) was a monochrome variant of Discocacti.

1. For all works cited, see http://arkleyworks.com; and for the “unhomely” aspect of Arkley’s suburban houses, including discussion of Freud and Surrealism, refer to Gregory, J., Carnival in Suburbia: The Art of Howard Arkley, Cambridge University Press, Melbourne, 2006, pp.21-28