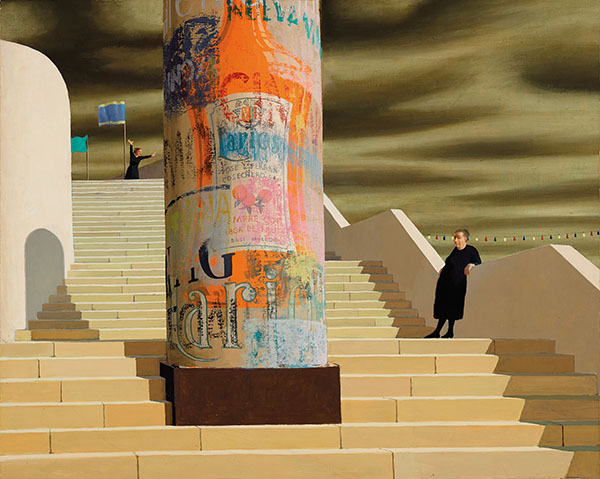 By Timothy Abdallah BA in Blog
Lot:
The Steps, Palma

Jeffrey Smart was never a spontaneous and unrestrained artist.  Certainly, some of his ideas came unexpectedly like mental snapshots, but the rendering and resolution of these snapshots into pictorial form was always painstaking and meticulous.  Smart explains it himself in the following words:

I usually work from drawings.  Then I take photographs.  Then I fiddle around with them, do little sketches, little ideas, little trials.   And sometimes they come off.  If it looks promising I push it forward into a small oil study.  If that promises well I push it forward again, and I embark on the big picture. It’s terribly slow. And I destroy a lot.1

For Smart, there are no dashed off works of bravura or painterly happenstance.  He is a studious artist whose compositions are as carefully constructed as they are rendered. They demonstrate how closely Smart studied his subjects and how his compositions were carefully deliberated upon.  They were often gridded out and the images were then recreated on canvas, with many subtle changes being made to the placement and scale of the forms and elements in the final painting.

The Adelaide-born Smart was only eighteen years old when his work was selected to be shown in that city’s first exhibition of modern art – The Testament of Beauty exhibition of 1939.  This seminal exhibition, organised by Mary Packer Harris (1891-1978), one of Smart’s lecturers at the South Australian School of Art in North Terrace in Adelaide, included the paintings of much older artists such as David Dallwitz (1914-2003), Ivor Francis (1906-1993), Jacqueline Hick (1919-2004) and Douglas Roberts (1919-1976).  Mary Harris, a devout Quaker, was an inspirational mentor and her later books, Art, The Torch of Life of 1946 and The Cosmic Rhythm of Art and Literature of 1948, further cemented her under-acknowledged influence upon the younger generation of emerging talents in South Australia.  The humanistic content of these two books, and the information on European modern art readily available at Max Harris’s Mary Martin Bookshop from 1942, complemented the new artistic spirit found in The Angry Penguins, the avant-garde journal founded by Max Harris and Donald Kerr in 1940.  It was in this intellectually advanced climate in Adelaide that the young Jeffrey Smart polished his painterly skills and sharpened his individualistic vision.

The new artistic spirit in the Adelaide of the 1940s turned away from traditional depictions of pastoral landscapes and nationalistic bush romanticism and moved toward urban contexts and the psychological place of self within metropolitan settings.  It is this personal landscape of mental associations and the inner self that gives the paintings of Jeffrey Smart their poetic content and their characteristic emotional tensions.  No other painter in Australia has captured this evocative content so precisely and opened one’s eyes to the harsh incongruities of industrialisation and the so-called ‘progress’ foisted by some municipalities - even in the wonderful ‘leave-it-as-it-is’ beauty of Palma on the Spanish island of Mallorca.

Smart’s paintings are both confronting in their vivid realism and strangely comforting in their recognition of familiar urban realities.  In making the familiar so unfamiliar, Smart stops the viewer short.  When one recognises the ubiquitous banality of Smart’s urban realities one is brought to admire and more fully appreciate his characteristically uncluttered and carefully composed ‘silent’ paintings.  Smart is a master at painting quiet empty moments.  It is the skilful and mysterious blending of these visual attributes that make Smart’s paintings so unique and memorable.  Smart himself tacitly confirmed this view when he wrote in 1968:

I find myself moved by man in his new violent environment.  I want to paint this explicitly and beautifully.2

By ‘violent’, Smart means urban and metropolitan – environments that are far from the unhurried and relaxed comforts of small villages, farms, vineyards and pastoral vistas.  Jeffrey Smart’s wonderful painting The Steps, Palma of 1965 is a very significant distillation of all these important artistic aims and aesthetic sentiments.  This mature painting, completed at the age of forty-four, presents the viewer with a juxtaposition of the human and non-human.  The painting is made up of a restricted palette of colours with no traces of individualistic brushstrokes and no painterly flourishes.  In this respect, Smart takes after the early Renaissance artists Piero della Francesca (1420-1492) and Domenico Ghirlandaio (1449-1494), whose techniques and geometric compositions he always held in awe.

The painting’s principal images are a large rise of steps that traverse a poster bollard covered with the remnants of old notices.  The effect is one of juxtaposition, formed by a contrast between the closely controlled sections of the painting with the almost Abstract Expressionist, vertical sections of the bollard.  The effect of the painting is a one of a paused eye blink, where objects and scenes are grasped in an instant.  Smart revels in just such a visitational mode of seeing.  It affords him emotionless distance and a grasp of the pictorial tableau.  The whole painting seems to have arisen from a glanced moment of acute observation.  One recognises the scene, since it is so common, and the painting is a tribute to Smart’s ability to distil and concentrate the aesthetic effects of such seemingly banal urban scenes – the ordinary is made to look extraordinary.  The uncanny ambience of Smart’s painting The Steps, Palma gives a hint of the source of the enigmatic feeling that pervades this work: that of Giorgio De Chirico (1888-1978), the Italian proto-Surrealist artist whose desolate piazzas and long lugubrious shadows are distantly echoed here.

Both Smart and De Chirico are acknowledged masters at capturing a particularly poignant and poetically nuanced artistic glimpse of the urban environment.  These attributes are also found in the Italian Post-War films of Michelangelo Antonioni (1912-2007) and Federico Fellini (1920-1993), where beauty is sought within the constructed confines of metropolitan realities.  All of them, De Chirico, Antonioni and Fellini, would respectfully recognise the poetry of Smart’s urban visuality.