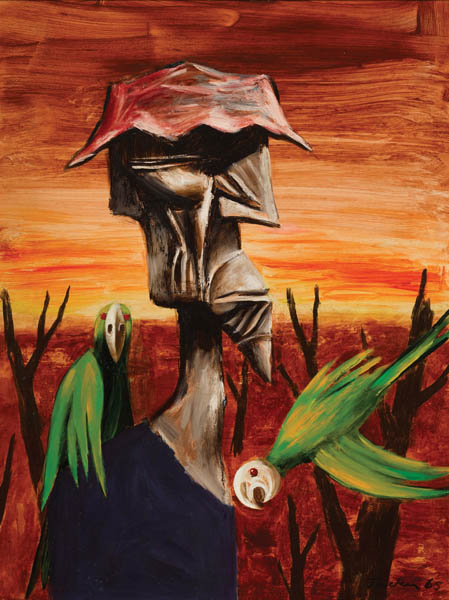 By Gavin Fry in Blog
Lot:
Intruder and Parrots

Albert Tucker was of a generation of Australians whose lives were constrained by the great international turmoils of the first half of the twentieth century. Born at the beginning of the First World War, his childhood was overshadowed by the communal loss of a nation that had lost sixty thousand young men, a generation of promise never to be regained. His teenage years were lived through the harsh realities of the Great Depression, a time when the once affluent Tucker family was reduced to humble circumstances, being twice evicted from the family home as they descended into genteel poverty. And just as his chances seemed to be improving with a future as an artist in sight, another world war arrived to throw the nation into six years of conflict abroad and severely straightened circumstances at home. It was no surprise that the man, and the art he produced, was dark, melancholy and uncomfortable. To a large degree self-educated, the young Albert Tucker gained his foothold in the art profession doing commercial illustrations and cartoons, including a period working alongside Sidney Nolan (1917-92) in the art department of Fayrefield Hats under the guidance of head artist Vernon Jones (1908–2002). Tucker’s early career after meeting Nolan, and through him, John and Sunday Reed, has become the stuff of local legend, with the Heide Museum of Modern Art now home to a whole wing devoted to his work of the 1940s.

Thankfully relieved of military service after a relatively short period, Tucker went on to create the powerful body of work known as the Images of Modern Evil. Dark and angst-ridden, they have come to epitomise the reaction of a sensitive artist to the horrors of war. Tucker envisaged a home front rife with corruption, crime and vice, the back lanes of inner Melbourne providing the meeting place for dissolute soldiers on leave and good-time girls out for whatever fun and profit might be made after dark. Always something of a puritan and spared the actual experience of conflict, Tucker let his imagination loose on the moral degradation he saw as rife in a nation at war.

Like most of his young artistic colleagues, the moment the opportunity to leave Australia and travel overseas became a possibility he made plans to go abroad. But unlike most of his fellow artists, his first trip was not straight to Great Britain but to occupied Japan. He had managed to gain ‘War Correspondent’ status accompanying American writer and poet Harry Roskolenko (1907-80) on a journey to document the lives of the defeated Japanese on their home soil. While in Japan, Tucker made many drawings and took a large number of photographs. While documentary in nature, his skills and trained artist’s eye allowed him to make a series of powerful images that, although never widely seen, were among the most significant of his career. He visited Hiroshima and the shipyards of Kure where the abstract power of mass destruction left a lasting impression. He returned briefly to Australia and, after separating from his wife Joy and young son Sweeney, immediately headed for England, arriving in the winter of 1947, one of the coldest on record.

While his two best friends from Melbourne, Sidney Nolan and Arthur Boyd (1920-99), would happily settle in England, Tucker couldn’t wait to leave and made his way to France, beginning a new life that would see him move to Germany and on to Italy over the next decade. Building a career in the war shattered nations of Europe was never going to be easy, especially as his dark expressionism was in many ways the last things local collectors were looking for. He pursued his tough and gritty style without compromise, all the time looking for official recognition from Australia with a number of attempts to gain entry to the Venice Biennale. A crucial opportunity came with an invitation to exhibit with Sidney Nolan at the prestigious Foreign Journalists Club in Rome in 1955. Being seen by many influential journalists was important, but the most telling outcome was seeing his work alongside Nolan’s Australian subjects, glowing with colour on the walls alongside the darkness of Tucker’s expressionism. Tucker felt energised by Nolan’s work, which awoke in him a powerful sense of his own ‘Australianess’. His heavily textured paintings of crucified Christs and tortured saints quickly transformed into bold bushrangers and outback explorers. He had been working with the newly developed polyvinyl acetate [PVA] as a medium that allowed him to build up deep crusty surfaces that became an ideal metaphor for the arid Australian landscape. In the same way the Images of Modern Evil were an imaginative response to the darkness of war, so too the landscape and explorers were an imaginative rendering of an Australia that was part of his cultural heritage, even though not one of his own direct experience. As the 1950s drew to a close Tucker brought a new sense of colour to his work, one that he’d discarded in the blackness of his expressionism of the first years of the decade.

Eventually Tucker tired of Italy and returned to London, hoping to move on to the USA, the home of his partner Mary Dixon, who had supported him both emotionally and financially during his time in Europe. A win in the lucrative Australian Women’s Weekly Art Prize helped fund his travel, but in the end it was Australia that called him home. The promise of a national tour of his work was a strong incentive and, with the continued backing of John Reed, he arrived back in Melbourne in 1960, ready to start the new decade back on home soil after thirteen years abroad. The work he had completed in Italy became an important jumping off point for his new paintings. Moving to the outer urban bushland at Hurstbridge he was able to bring an authentic local feel to his renditions of tough explorers and outback characters. The colourful parrots he saw in the trees around his studio became symbols of wildness and anarchy, their powerful beaks rendered as mechanical pincers ready to rip into the lost souls. The stylised heads, which were part rocky outcrop, part contour map and altogether barely human, were through a process of gradual modification a direct reference back to the disembodied mouths from the Images of Modern Evil. That leering symbol had in turn been extracted from his seminal Portrait of Adrian Lawlor of 1939, his most important pre-war painting.

Intruder with Parrots contains all of the crucial elements of the outback heads – a gritty character forcing his way into a bleak outback landscape, his way tracked by two menacing birds ready to bring him down at any time. His head as eroded and fissured as the land he treads, the expressionless man does not seek our empathy or pity, as do Russell Drysdale’s (1912-1981) outback battlers, but rather we see him as a man out of place and out of time, a precursor to the despoilers and exploiters of wild nature. Albert Tucker often stated that art should be as tough for the viewer as it was for the artist – the creative struggle in wrenching a powerful image from the imagination would of necessity take time and effort to absorb. The works of Albert Tucker epitomise the personal sacrifice inherent in the creative life. In the end he found the critical recognition and reward he made central to his work over seven decades, marking him as one of the most significant artists of the century.