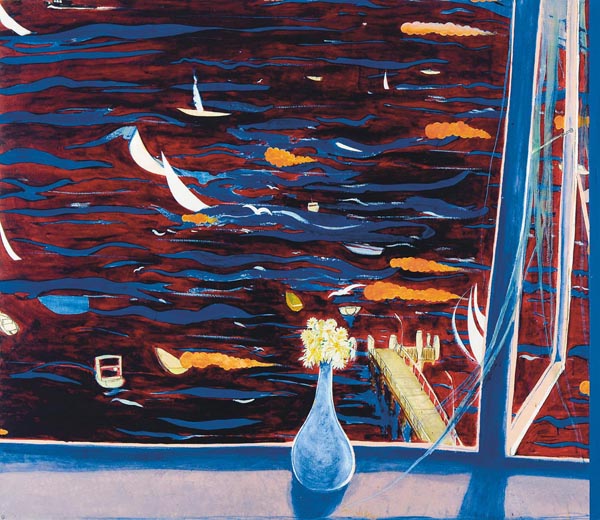 By Ken Wach in Blog
Lot:
Westerly with Daisies (View of Lavender Bay)

Brett Whiteley’s Westerly with Daisies (View of Lavender Bay) of 1974, was purchased from his Lavender Bay Series exhibition at Australian Galleries in Collingwood, Melbourne; the gallery set up in 1956, the year of the Melbourne Olympics, by the aesthetically discerning couple, Tam and Anne Purves. Whiteley held seven exhibitions there between 1966 and 1977.

As can be expected Whiteley’s oil on board painting Westerly with Daisies (View of Lavender Bay) of 1974, shares many characteristic aspects with his Lavender Bay Series. Most of these works were executed or conceived in and around the Lavender Bay area of the lower North Shore region in Sydney, just three kilometres from the centre of the city where views of the waterside repeatedly vie for attention. Earlier, the area’s relaxed and semi-tropical features attracted both the famous artist Norman Lindsay (1879-1969) and the Australian cricketing legend Sir Donald Bradman (1908-2001). Whiteley, too, found the area irresistible and often returned to its many sumptuous charms, especially at times of stress and when in need of respite.

Whiteley was born on Friday 7 April 1939 and brought up at 18 Lucretia Avenue in Longueville in Sydney; he died on Monday 15 June 1992 in the coastal town of Thirroul in New South Wales – parenthetically, the town where the famous English novelist D.H. Lawrence (1885-1930) wrote his 1923 book on Australia entitled Kangaroo. Whiteley’s artistic trajectory was astonishing. He won his first art prize at the age of seven at the 1946 RSPCA competition in Sydney and ten years later, at the age of seventeen, he won the Young Painters’ Section Prize at the 1956 Bathurst Show. In November 1959, at the age of twenty, he won the Italian Government Travelling Art Scholarship, which was judged by the artist Russell Drysdale (1912-1981). After early success, Whiteley’s life was firmly set on an artistic path and he more than proved himself through forty-nine successful solo exhibitions held between 1962 and 1992 – a highly productive average of three exhibitions every two years.

Whiteley’s Lavender Bay Series of paintings usually present views from windows in his studio home in the building found by his artist-architect friend Rollin Schlicht (1937-2011), the subject of a number of portraits.1 The present painting was executed shortly after the new studio was purchased and is one of the finer examples of his Lavender Bay Series. Whiteley enjoyed a new personal tranquillity in this studio-residence and his paintings developed carefully composed formats with delicate hues and a calm ambience. After his harrowing time in America, during a two-year stay on a Harkness Fellowship from 1967 to 1969, Whiteley flew from New York to stay at Navutuleva Village, about two hours drive from Suva, the capital of Fiji. Whiteley’s wife Wendy and the couple’s five-year old daughter Arkie, joined him about two months later. They lived simply and happily and enjoyed their island paradise after the turmoil and bustle of New York. A little over five months later, their blissful stay was abruptly cut short by an early morning drug search undertaken by the Fiji Police. The Whiteleys were arrested, fined and ordered off the island to face front-page infamy upon their return to Sydney in November 1969. Back in Sydney, Whiteley seemed to find some form of compensation and relief at his Lavender Bay home and his paintings there are characterised by an observational acuity that is tinged through with contented visual pleasures – these artistic creations are untroubled feasts for the eye. As a consequence, all of Whiteley’s Lavender Bay Series of paintings are characterised by purely aesthetic aims stimulated by watching the changing conditions and colours of the bay – his home at Lavender Bay must have felt like a comforting place of personal solace.

All of the oil paintings in the Lavender Bay Series lack a traditional vanishing point perspective and are presented almost as flat screens, like Chinese scrolls that are read as they are unfurled before the eye. His compositions of the time rejoice in the space and vastness of the marine scene and the paintings are dotted with carefully placed images of the wharf, boats and trees against the expanse of water. They are all viewed from above through a window and recall the visual “charm” and colouristic harmonies of the Intimist school in Paris. The school was made famous by French artists such as Edouard Vuillard (1868-1940) and Pierre Bonnard (1867-1947), both of whom believed that actual subject matter was not important - painting had to speak of the qualities inherent in the masterful handling of paint and exude a refined visual sensibility. In short, what was called for was a sophisticated awareness of the simple everyday world; an awareness that stimulated reflective thought and awakened a creative response. The artist himself saw his Lavender Bay Series in just such aesthetic overtones. In the introduction to the catalogue of the 1974 exhibition of Whiteley’s Lavender Bay Series of paintings at Melbourne’s Australian Galleries, the artist wrote the following revealing passage:

The paintings in this exhibition begin from the premise of recording the glimpse seen at the highest point of affection - points of optical ecstasy, where romanticism and optimism overshadow any form of menace or foreboding. Re. Matisse’s armchair. Very little reference is given to art history, as has sometimes been my practice. Almost all the works have been rendered in a lyrical and personal style where colour, hitherto largely ignored and downplayed, has this time been used in saturation, particularly a Brahmsian plum and a stingingly clean ultramarine blue. Some pots have been made to house flowers simply because one found it very difficult to buy a beautiful vase in a shop or gallery.2

The enigmatic reference to “Matisse’s armchair” in Whiteley’s statement warrants some passing explanation. The phrase points to the much cited comment by the justly famous French artist Henri Matisse (1869-1954) that he wanted his painting to be the equivalent of a comfortable armchair, in which a tired businessman can repose and relax. In this, he seemed responsive to the whispered thoughts of the very popular French aesthete and poet Charles Baudelaire (1821-1867) who died two years before Matisse was born. Baudelaire’s long and famous collection of poetry entitled Flowers of Evil (Fleurs du mal), first written in 1857, contains a passage entitled Invitation to the voyage (L’invitation au voyage) that is particularly apt when appreciating and understanding both Matisse in his “armchair” stage and Whiteley during his Lavender Bay Series.

We should have a room/Never out of bloom:
Tables polished by the palm
Of the vanished hours
Should reflect rare flowers
In that amber-scented calm… Now the sun goes down,
Tinting dyke and town,
Field, canal, all things in sight, Hyacinth and gold;
All that we behold
Slumbers in its ruddy light.
There, restraint and order bless/luxury and voluptuousness.3

The Window – Lavender Bay of the same year.4 However, its most appropriate and worthy comparators are his outstanding paintings Lavender Bay at Dusk of 1984 and View from the Sitting Room Window, Lavender Bay of 1991.5 All of these paintings were done during Whiteley’s most peaceful periods and attempt to capture the transitory effects of their scenes - this is why they look so relaxed and calm. There are no literal “messages” in these paintings, they simply celebrate and present the beauty of nature in pictorial vignettes in the manner of an “Australian Matisse”. All in all, the present painting is a striking, rare and significant example of Whiteley at his most relaxed and refined. Whiteley himself deserves the last remark:

I have to paint pictures that have an effortless naturalness, not artificial or synthetic, not manufactured. I have to paint pictures that have no affectation through mental tricks, but are graceful and according to nature … Every part should be poetic and responsible for its own existence. It should be easy to take. I try to change the meaning of the thing painted into a new image – an elevated feeling.6

Pearce, B., Brett Whiteley, Art and Life, Thames and Hudson and The Art Gallery
of New South Wales, Sydney, 1995