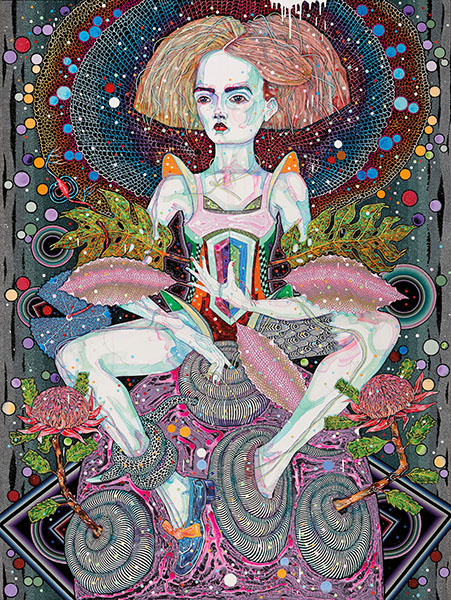 Here we see a fearless protagonist, contemplative and unwavering. A goddess in a fabulous one-piece, astride a pink planet with two waratah sentinels and frames of energy pulsating around her. She stages herself for herself alone, in equilibrium with her surroundings and herself. Life, love, giving and receiving.1

The present work, Openly Song, described above by its multidisciplinary creator, was one of Del Kathryn Barton’s favourite works in the artist’s largest survey show to date, held at the National Gallery of Victoria in 2017 - 2018 at the personal invitation of the NGV's director, Tony Ellwood.  The exhibition comprised more than one hundred and fifty artworks which included paintings, drawings, film, sculpture, collage and textiles. The exhibition marked a high point of the artist’s career which firmly cemented her amongst the most significant Australian contemporary artists of our time. Barton appeared on the cultural radar more than ten years prior when she won the Archibald prize, Australia’s richest portrait prize, at the Art Gallery of New South Wales with her self-portrait, You Are What is Most Beautiful About Me and again in 2013 with Hugo - her portrait of Australian actor, Hugo Weaving. The artist’s highly successful venture into filmmaking saw her short animation film, The Nightingale and the Rose, win a string of accolades including the Film Victoria Erwin Rado Award for Best Short Film at the Melbourne International Film Festival in 2015; Best Direction in an Animation, Australian Directors Guild in 2016 and Best Short Animation, 6th Australian Academy of Cinema and Television Arts Awards in 2016. The film has been touring regional galleries around Australia with a collection of her major paintings and other related works since 2017.  A second short film, Red, featuring actress Cate Blanchett debuted at the Art Gallery of South Australia in 2017 - the then director Nick Mitzevich stated the film would take Barton's career ‘to a new level and new audiences’.2 The critical and commercial success of her multidisciplinary practice has created a dedicated following of admirers and collectors of her work. Barton’s intricately painted, large format works are highly desirable and eagerly sought-after and have become increasingly in-demand by collectors both in Australia and overseas.

Barton’s Archibald winning portrait from 2008 captured the public imagination and represents the artist’s central tenets - female sexuality, maternal love and the interconnectedness of these themes to the natural world. The matrilineal bond in Barton’s work is crucial to understanding her work as an artist - stemming from her own late mother and passed onto her two children, it informs much of her oeuvre. During the artist’s early career, rather than keep her family life separate from her professional life, Barton boldly chose to include her young children as subjects in her art, demonstrating the maternal devotion which imbues her body of work. Following her first Archibald win, Barton described the innate love imparted through the experience of motherhood, ‘…very little compares to the devotion I have for them both…the alchemy of life offered forth from my inhabitable woman’s body is perhaps the greatest gift of my life’.3 The portrait depicts the artist’s full, multi-dimensional life and brings aspects of the contemporary feminist agenda into the public spotlight. It highlights the desire of women in contemporary society to simultaneously have a working life and a family life – ‘the whole of everything’.4

The present work, Openly Song, painted in 2014, represents Barton’s vision of women in the wider world. Her personae are determined, self-possessed beings that dominate the dynamic, natural realm in which they inhabit whilst harmoniously co-existing with the myriad flora and fauna. Inspired by the work of contemporary Australian singer and songwriter, Sia, Barton’s protagonist can be compared to the young dancer, Maddie Ziegler, in the music video for the song Chandelier. The figure in the present work bears Sia’s trademark blonde bob hairstyle, the highly-coiffed arrangement enhancing the female’s presence within the composition. Both the singer and artist share similar values on the subject of gender equality which are demonstrated in their respective artistic practices.

The influence of Gustav Klimt (1862-1916) is also evident in the present work, the other-worldly female figure appears to emerge serenely from a field of hyper-decorative patterning, a juxtaposition famously employed by the Austrian symbolist painter in the late nineteenth century. Barton’s portraits share something of Klimt’s women-serpents, their gaze is not directed at the viewer, but set off-centre. In the present work, the angle of the gaze together with the slightly elevated position of the figure, brings an unflinching self-assuredness that is characteristic of the artist’s female portraits. Symbolist influences are observed in the body language of Barton’s sorceress, recalling the left-handed gestures used in medieval art to communicate tone and spiritual meaning. ‘Her work directs us away from our refined, controlled and categorised society towards a mysteriously interconnected world where spirit, psyche, natural cycles and the body are united in intimate, unknowable cycles.’5

Del Kathryn Barton’s childhood memories of roaming amongst nature have informed her artistic practice, providing a deeply-ingrained sense of an abundant natural realm. These experiences left an indelible mark on her artistic practice - the figures, both anthropoid and animal, that inhabit her paintings first appeared in this enchanted childhood wilderness. The bushland the artist roamed as a child has, through her creative practice, become the archetypal forests of the imagination, metamorphosing into the ‘beautiful, bewitched world’6 that she creates through her art. Barton’s eye for detail is evident in her layered, highly detailed imagery – thousands of tiny dots, lines and marks painstakingly executed by hand and the product of many hours of work. The artists creates an almost palpable energy on the surface of the painting by assembling flawless parallel rows of dots that graduate in both size and colour. The subtle variations in sizing and shading adroitly brings a sense of gentle movement to the composition. The present work demonstrates the artist’s technical and creative ability and unwavering commitment to her artistic vision.

In Openly Song, the omnipotence of nature is evident – reptilian coils bind the ankles of the figure as she sits astride a pink planet. Large, brightly coloured waratahs erupt and stand sentinel whilst large, green monstera deliciosa fronds emerge from her flanks. Behind the figure, vividly coloured spheres levitate and a web-like network of beats emit life-giving energy. ‘Many of Barton’s compositions pulsate from a centre point as a mandala would, with a woman at the core radiating colour and shapes…contemporaneous cues embolden the female forms, like a portrait or icon from centuries past.’7

Since Barton’s first Archibald prize win in 2008, her career trajectory has been astonishing – more than twenty solo exhibitions both in Australia and overseas, numerous prizes including a second Archibald prize and a survey show at the National Gallery of Victoria in 2017 – 2018. Her art is in the permanent collections of the Art Gallery of New South Wales, Sydney; the National Gallery of Victoria (NGV), Melbourne; Queensland Art Gallery/Gallery of Modern Art, Brisbane; the National Gallery of Australia (NGA), Canberra; the Art Gallery of South Australia, Adelaide; the Museum of Old and New Art, Hobart; Rockhampton Art Gallery and the Artbank collection. Since 2010, Barton has collaborated with well-renown Australian designers, Romance was Born, releasing several collections of garments featuring her distinctive illustrations.8 In May this year, Barton will exhibit in a group show in London, SHEBODY, alongside international art luminaries Tracey Emin (born 1863) and Louise Bourgeois (1911-2010). Closer to home, the artist’s works will feature in a highly anticipated exhibition from 30 May-13 Sep 2020 alongside other established female Australian artists, Know My Name (#knowmyname), at the National Gallery of Australia - the brain child of current director, Nick Mitzevich. Over the past two years, Barton has been working on her first feature film with young Australian scriptwriter Huna Amweero, the artist describes the work here - ‘there will be lots of different animation styles, but it's a live action, coming-of-age-film based on Puff the Magic Dragon but with a young female protagonist, an auteur film.’9 Further to her own forays into filmmaking, the Australian actor, Simon Baker, recently announced plans to direct a biopic of the artist this year.

High demand and long waiting lists for Barton’s paintings have sustained the robust prices that they achieve on the primary and secondary markets both in Australia and overseas. The numerous accolades, together with the critical and commercial success that she has achieved to date, places her as the only female amongst the top eight highest prices achieved by Australian living artists. 10